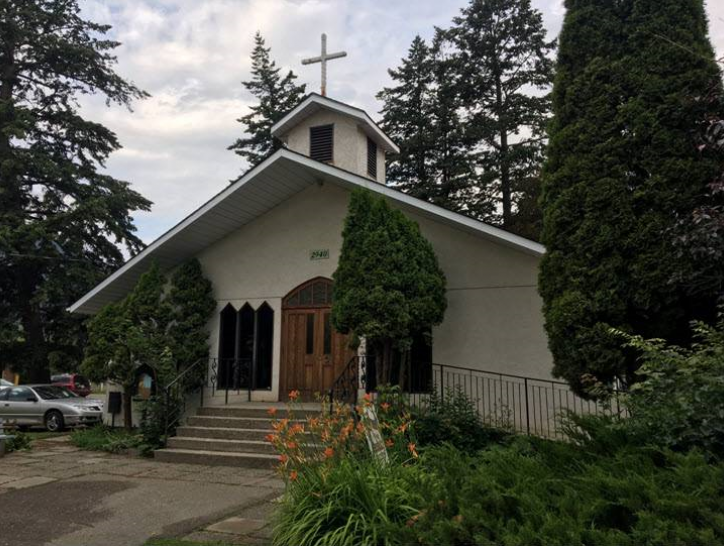 Seventh-day Adventists in British Columbia Joined Four Other Denominations in Building a Shared Worship Space. Officials believe the community church in Falkland, British Columbia, to be the only church in the world to have been collaboratively built by five different denominations — a true story of spiritual diversity. “There were the Roman Catholic, Anglican, and United Churches here in this town. They were small congregations,” said Falkland and District Community Church and Fellowship Society secretary Irene Morck. “The buildings were decrepit, and they got the idea that they should just try to amalgamate and make a community building.” Shortly after, officials from the Seventh-day Adventist and Alliance Church joined in on the collaborative idea. “As far as we know, it’s the only one in the world that was built by five different denominations,” Morck said. “The Anglicans, United Church, Roman Catholic, Alliance, and Seventh-day Adventists, and all the people in this community and all the surrounding districts built this church.” The church was built in three months and was finished in 1987, sitting proudly on the same ground where the United Church was previously erected. Morck said several parts were salvaged from some of the old churches, such as the altar, the antique organ, the lectern, the antique chairs, and the bell, which is rung usually every Sunday morning. But the church is in desperate need of repair. The structure is aging and a lot of interior and exterior work is needed.

“Well, as the building is 31 years old, it’s beginning to show signs of deteriorating. The main attention was to get the inside taken care of to make it comfortable,” said board director Angus MacInnes. “Outside, as far as making the building envelope secure, the stucco and exterior paint work, the front steps, and the roof need to be done.” One other improvement is on the list: an elevator, which will make the building more accessible. “We’re hoping to raise about $77,000, which is a lot of money,” Morck said. “We’re now just over $4,000, but it comes a little bit at a time, and we appreciate every little gift….We can’t let this church disintegrate. We can’t let the whole ideals and enthusiasm of these pioneers from 31 years ago just turn into dust,” Morck said. “Many churches have been abandoned and changed into all kinds of things. “We just have to keep it going. We love it.” From CFJC Today, “Falkland church, with a one-of-a-kind history, needs community support for much-needed renovations.”

Pacific Adventist University Medical Students Fund and Build Addition to Clinic. Five fourth-year medical students from the Pacific Adventist University (PAU) in Port Moresby, Papua New Guinea, have built a veranda for the out-patient building at Togoba health center. These five students spent their own money and resources out of love to allow patients to sit in comfort while waiting to be treated. Prior to the construction of the veranda, patients had been seeking shelter under nearby pine trees to avoid getting wet from the rain and heat from the sun. The outpatient building was built in the late 1940s by the colonial administration and had limited space where clinicians check a few patients at a time and treat them while the rest had to wait outside for their names to be called resulting, sometimes, in their getting wet by the rain or hot from the sun. Leahine Yapi, one of the five students, said that although they had school fees to be paid this year, they could not stand seeing patients seeking shelter under the pine trees, and this prompted them to contribute more than K1000 each to build the veranda for them. The SDA mission health director Simon Peter, and the Western Highlands provincial health authority acting director for population health Dr. Maddison Dat, jointly opened the small extension ceremony. Peter said the SDA church did not have any funds to carry out maintenance work on existing run-down buildings and was very happy with the students for spending their own money for their people’s benefit. From Post-Courier, “PAU Students Pay For And Build Out Patient Extension.”

Keene SDA Church Volunteers Sew 180 Dresses to Support Southwestern Adventist University’s Mission Trips. In Keene, Texas, women members of the Keene Seventh-day Adventist Church have sewn 180 dresses for young girls in both the Navajo Nation and the Dominican Republic. The process of sewing a dress takes between three and four hours. Creating 180 unique dresses took the team a combined total of 600 hours, not including the time they used to buy supplies, cut the pattern, and prepare the fabric. “We talked and laughed as we sewed away,” SWAU student Peggy Jacobs said. “While the process was time consuming, it honestly flew by.” During spring break, many Southwestern Adventist University students will deliver the dresses as part of their short-term mission work in both the Dominican Republic and the Navajo Nation in Arizona and New Mexico. “Being part of this project has made me want to look for more projects to be involved in, and it makes me feel good to be doing good for others,” Jacobs said. “I want the young girls to feel loved and to know that no matter what hardships they go through, there are people, young and old, who care for them.” This year marks the 21st year that SWAU has served in the Dominican Republic and the 16th year that the university has served in the Navajo Nation. From Cleburne Times-Review, “SWAU’s mission trip teams create 180 homemade dresses.”

Sacramento Adventist Academy Wins Championship with Local Judge as Coach. Sacramento Adventist Academy’s boys’ basketball team recently won its division title. Scott Tedmon, a judge of the Superior Court of Sacramento County, is in his fourth year coaching at SAA. “Coaching is so much fun, just a gas,” he said. “There are parallels to both jobs [judge and coach],” Tedmon said. “I’m very demanding. There are rules.” Sacramento Adventist is small only in terms of campus enrollment; 270 students attend the kindergarten through 12th-grade school. There are 38 in the senior class. However, the sidelines at home games might as well be the walls. It’s that cramped, something out of Hoosiers. Fans lined across the wall cannot extend their legs, or they’d be on the court. One baseline has seating for three deep, and the other is a stage that packs in people young and old in a sea of school-colored red. It’s a fire marshal’s nightmare. The place seats 350, maybe, but it overflows at playoff games, the cheers bouncing off the closed-in walls. “It’s such a great setting here,” said athletic director Kenny Johnston, a graduate of the school. “We’re a small school. We get overlooked, and we had to earn respect,” Tedmon said. “We relish a challenge. We want to push ourselves. We just wanted a chance.” From The Sacramento Bee, “Sacramento Adventist coach Scott Tedmon is ruling over two different types of courts.”

Montana Adventist Church “Souper Bowl” Challenge Brings Big Win for Food Pantries. Glacier View Seventh-day Adventist Church in Montana raised 7,951 cans of soup during its 10th annual Souper Bowl. Russ Jenkins, coordinator of the annual Souper Bowl drive, said that during the four weeks leading up to the Super Bowl football game, the congregation is divided into two teams, each competing to win a Souper Bowl trophy and help their neighbors in need. Each congregant brings in money for soup which is then purchased and given to the two food banks, the Ronan Bread Basket and the Polson Loaves and Fish Food Pantry. This bounty of soup will last almost a whole year until the next Souper Bowl contest. Each year, the number of cans of soup has grown. A letter of appreciation from the Bread Basket said this: “What better meal can we give our clients than a hot bowl of soup? Each time clients comes to our facility, they receive a can or two and are pleased and appreciative. The Bread Basket serves 150 to 200 families each month. Since we have not had to purchase soup from our Bread Basket money supply, we are able to provide other nutritious items for our clients….a bushel basket full of thanks.” From Valley Journal, “Soup competition helps food pantries.”

Andrews University Launches New Initiative Against Abuse. On Sunday, advocates and victims of abuse closed out a three-day rally at Andrews University. Organizers of the Rise Up Against Abuse rally said they are invested in spreading awareness about the seriousness of abuse. Dominique Gummelt, Director of Wellness at AU said more than 200 people attended rally activities. “Rise up against abuse it’s a rally but it’s really a launch rally to this new initiative,” Gummelt said. Participants went through workshops, trainings, presentations, and panels. The rally featured the violence against women photo exhibition, rise up Zumba awareness party, and the solidarity wall. On the solidarity wall, messages like ‘we believe you’ and ‘this does not define you’ were painted on the wall put up on Thursday. University officials said by Sunday it was completely filled with unity messages. From ABC57 News, “Andrews University closes out 'Rise Up Against Abuse' rally on Sunday.”