With Religious Freedom Under Threat, Is There a Way Forward? 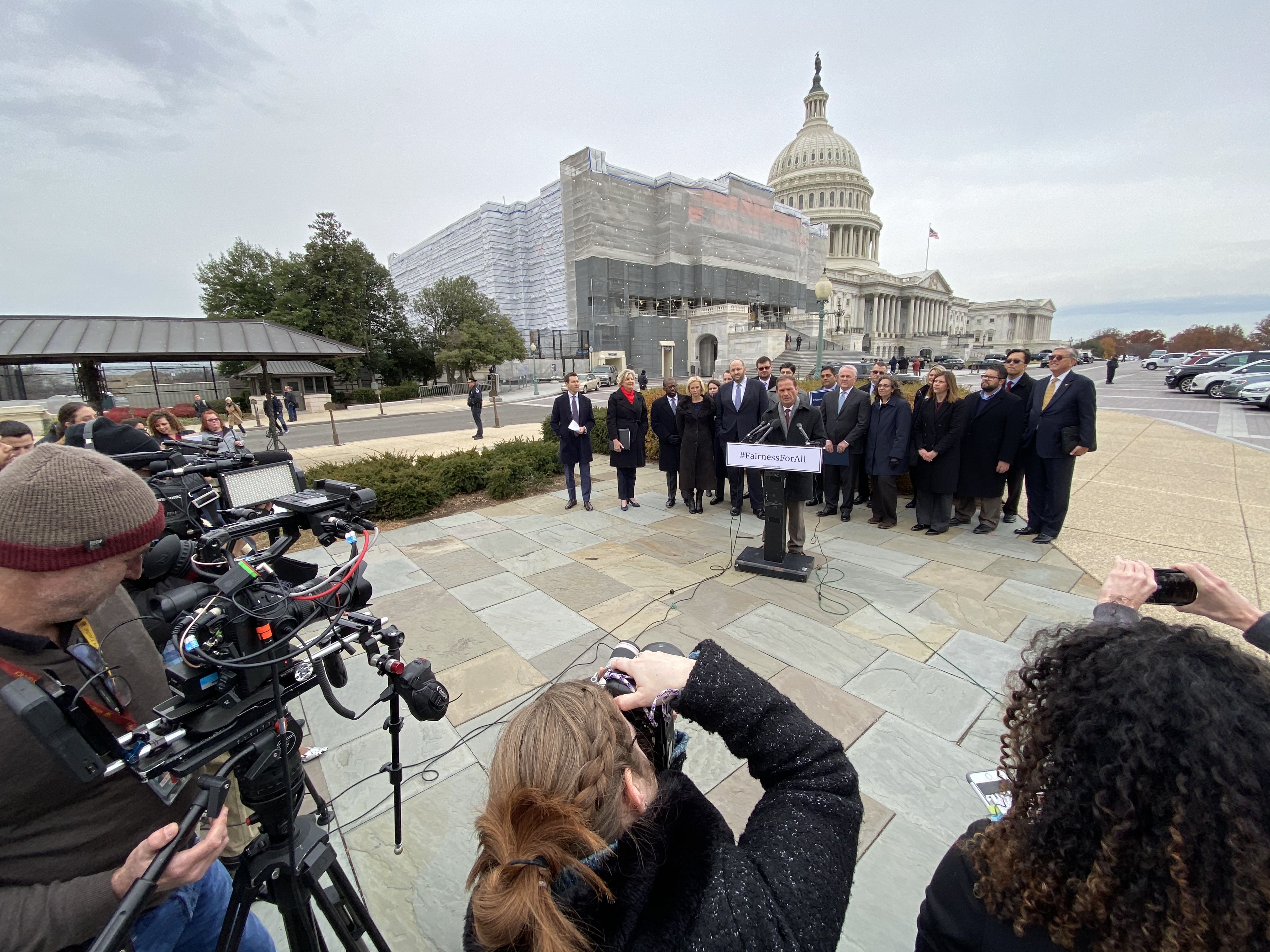 Editor’s Note: This article was originally published by the North American Division on December 6, 2019 and is republished in full with permission below. The original article can be found on the NAD’s website here.

On Friday, December 6, 2019, the Fairness for All Act was launched in Washington, D.C., by Congressman Chris Stewart (Utah-R), with support from several religious groups and coalitions. Fairness for All (FFA) is centered on two core beliefs: no American should lose their home or job simply for being lesbian, gay, bisexual, or transgender; and no religious person should be forced to live, work, or serve their community in ways that violate their faith. Below is a commentary describing FFA's importance and why Adventists support this bill.

There was a time, not that long ago, when the idea of religious freedom was seen by almost everyone in society as a good thing, worthy of legal protection. But today this ideal — long revered as a foundational human right and a central value of the American Republic — has become tainted with controversy. In fact, within two decades, religious freedom has gone from being one of the most unifying ideas within America’s public discourse to one of its most polarizing. In opinion pieces nationwide, legal protections for religious freedom are now being called everything from “a sword for discriminating against others” to “outdated and unnecessary” in today’s pluralistic society. And for those who watch religious liberty trends or belong to a religious minority, this seismic shift in public attitudes is both unmistakable and worrying.

It doesn’t take long to locate the frontlines of this increasingly bitter culture war. It’s a dispute that is centered largely on the interplay between religious freedom protections and LGBT civil rights. Increasingly, people of faith who uphold a biblically based, traditional view of marriage and human relationships are cast as intolerant or bigoted.

But this issue is about more than just negative perceptions and labels. There are real and significant challenges ahead because, as the fabric of society shifts, so inevitably do its political and legal realms. It is this reality that raises a number of tremendous concerns for people of faith and for religious denominations that seek to operate churches, schools and other institutions while staying true to their purpose and mission.

For religious freedom advocates, these issues have recently taken on a new sense of urgency. In March 2019, with great fanfare and a large majority, the U.S. House of Representatives passed a piece of legislation called the Equality Act. For those who care about religious freedom, it was a wake-up call. Although it's unlikely the Equality Act will move forward in the Senate during this Congress, the significance of its passage in the House — and the overwhelming public support it generated — shouldn’t be taken lightly.

Why was this so significant? For the very first time, a piece of federal legislation was voted by the House substantially expanding civil protections for LGBT individuals, but without also including corresponding protections for religious organizations and people of faith. In fact, not only were these basic protections missing, the Equality Act went a step further and cut off appeals to other federal laws protecting religious freedom.

If federal legislation of this kind did become law, what would it mean for the Seventh-day Adventist Church and its many institutions in the United States? What would it mean for other faith groups and for individuals whose religious convictions compel them to reject current social norms about sexual orientation and gender identity?

There is no doubt that such legislation if passed would, by design, leave very little protection to those whose religious beliefs are out of step with current social attitudes. It would, for instance, impact the ability of religious institutions to make hiring decisions that take applicants’ religious beliefs into account. It could lead to the government or professional bodies withholding accreditation to religious schools and organizations. It could hamper the church in its ability to run community service programs or put its disaster response institutions at risk.

The mass of litigation that would inevitably arise in order to resolve these issues would be long, expensive, disruptive, and destructive.

Watch cable news or scroll through your social media feed and you might be forgiven for thinking the culture war around LGBT rights and religious freedom is a zero-sum conflict. These voices calling for a “winner-take-all” approach are both forceful and strident — and yet they are mistaken.

We don’t have to choose between religious freedom protection or equal civil rights protection for everyone in the public space. In fact, our beliefs and values as a church suggest these two broad goals are not at odds, but complementary.

Yes, our commitment to religious freedom means that we will continue to assert, unequivocally, our right to express our faith and to administer our churches and institutions according to our biblical values and beliefs — including our beliefs about human relationships. We will also continue to defend the rights of individual church members to honor their conscience as employees and business owners.

Yet at the same time, should we not also affirm the right of every person to be treated with dignity and to have legal protection in secular employment, housing, credit and many other areas of life, regardless of whether we agree with their choices or beliefs? Adventists know that every human being is created in the image of God and deserves to be treated with compassion, dignity, and respect. This, too, lies at the heart of what it means to be a follower of Christ.

Over the past few years, Seventh-day Adventist advocates, from both the General Conference and North American Division, have worked with other groups to draft a unique piece of federal legislation. The Fairness for All Act, which was introduced into the U.S. House of Representatives on December 6, is a proposed law that rejects the bitter, polarized approach that has long dominated public discussion about these issues.

Fairness for All lays out strong protections for religious groups and individuals of faith. Religious organizations would continue to be able to hold internal policies and make hiring decisions that reflect their beliefs. Further, they would not be punished by the government — through loss of tax-exempt status, or accreditation for instance — for their beliefs about sexual orientation and gender identity. Nor could they be found to be engaging in discriminatory actions simply because of these beliefs.

In the general secular workforce, the religious beliefs of employees would be respected by employers unless these create “significant difficulty or expense” for the employer. For Adventists and other people of faith, this would also offer more robust protection for Sabbath accommodation than currently exists at the federal level.

At the same time, the legislation extends much-needed civil rights protections to LGBT individuals and acknowledges that they should never be subject to discrimination or harassment in secular employment, housing, or many other commonly protected areas—protections currently lacking in 29 states.

Fairness for All says, in essence, that there is a clear and principled way forward through this difficult cultural and legal landscape.

What Fairness for All doesn’t do, however, is to signal a change in thinking on the part of the Church regarding issues of sexual orientation or gender identity. Indeed, if there was an intent to do so, there would be no need to seek to preserve the legal right to act on those beliefs and administer our schools and institutions accordingly.

The Adventist Church’s beliefs on human sexuality are unequivocal and are clearly expressed in various statements and guidelines touching on marriage, sexual orientation, and gender identity.

In all these statements there is a common thread of compassion and love; an affirmation that “all people, regardless of their sexual orientation, are loved by God” and that Adventists will never “condone singling out any group for scorn and derision, let alone abuse.”

It is this dual message—of upholding both religious freedom and human dignity — that is at the heart of the Fairness for All legislation.

For many, this is not an easy topic. The public discourse around these issues is awash with pain-induced and fear-filled rhetoric. Amidst the anger and bitterness, though, we pray that Seventh-day Adventists will speak boldly with a voice of reason and kindness. A voice that echoes the loving and gentle compassion of our Savior. A voice that speaks for both the central place of religious freedom in our society and the inherent worth and dignity of every child of God.

What Is Fairness for All?

Fairness For All protects both religious institutions and people of faith from being forced to violate their conscience in the areas of sexual orientation and gender identity. While the bill itself runs nearly 70 pages, its major religious liberty protections can be distilled as follows:

• Accreditation cannot be denied to schools because they uphold biblical standards.

• Can maintain housing policies based on religious principles.

• Cannot be penalized by federal or state governments for teaching according to their religious mission.

• Religious employers, including schools, can continue to require their employees to uphold and adhere to the institution’s religious views and practices.

• People of faith who need accommodations in the workplace (such as Sabbath off) get the same legal protections as people who are disabled. Currently the law allows employers to discriminate if it requires more than a minimal cost to accommodate.

• Protects employees in the workplace who express views on marriage and other religious topics.

• Protects Houses of Worship and Other Religious Spaces

• Houses of worship and other religiously-owned spaces cannot be required to rent or share their facilities for uses that violate their beliefs.

• Allows owners of small businesses (less than 15 employees) to continue earning a living without being forced to provide services that violate their religious beliefs.

• Healthcare providers will not be required to provide and/or perform medical procedures that violate their beliefs. However, they will still be required to treat all patients, as they currently do, regardless of their sexual orientation or gender identity.

• Does not change any of the current protections surrounding abortion for religious healthcare providers.

• Agencies such as ADRA and Adventist Community Services will be protected from losing funding because they maintain religiously based hiring standards. Would continue to serve all in need regardless of religious faith or practice.

• IRS could not revoke the tax-exempt status for churches, schools and other religious organizations because of their religious beliefs and practices.

This article was written by Bettina Krause, Melissa Reid, and Dan Weber, and originally appeared on the North American Division website.