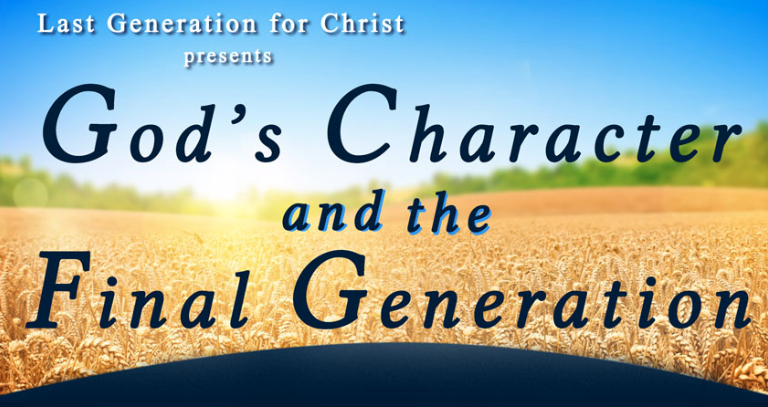 Last Generation Theology is the Adventist message according to four of its defenders who spoke at the Sacramento Central SDA Church March 22 and 23 for a seminar sponsored by Last Generation for Christ. Norman McNulty, Larry Kirkpatrick, Dennis Priebe, and Gerard Damsteegt explained and defended the theology shaped by the Ellen White statement found in Christ’s Object Lessons, “When the character of Christ shall be perfectly reproduced in His people, then He shall come to claim them as His own.” The organizers estimated that a thousand people attended at some point during the meetings that began on Friday evening, continued during the Sabbath morning worship service, and then went from 2 p.m. until 7:30 p.m. on Sabbath afternoon.

“It wasn’t God’s plan for us to still be here,” Dr. McNulty said in his opening address on “Why Jesus Waits.” A neurologist from Lawrenceburg, Tennessee, McNulty attributed Christ’s delay to the insubordination, unbelief, worldliness, and strife among the Lord’s people. We don’t often look at it from God’s point of view, he suggested, to realize that we might be delaying Him.

Turning to Christ’s Object Lessons (page 67), he reminded his listeners that “Christ is seeking to reproduce Himself in the hearts of men; and He does this through those who believe in Him. The object of the Christian life is fruit bearing — the reproduction of Christ’s character in the believer, that it may be reproduced in others.”

And so McNulty put forth a challenge to conservative Adventists to not be pushy, but to display meekness, joy, and peace; to not be Sadventists, but a generation that has love, joy, peace, and gentleness. “Stop being grumpy,” he said. How we respond to Christ is important, because the Adventist message is not one of time, but of character.

Dennis Priebe, an independent evangelist who sometimes works with Amazing Facts, called out the conservative Evangelicalism that he suggests has crept into the SDA church’s theology as problematic, as being the Trojan Horse that has sapped the life out of Adventism. As evidence of the evangelicalism, he named four recent books from three Adventist publishers: Reinder Bruinsma’s In All Humility  published by Oak and Acorn; George Knight's End-Time Events and the Last Generation and God’s Character and the Last Generation edited by Jiří Moskala and John C. Peckham with contributions from faculty at the Seventh-day Adventist Theological Seminary on the campus of Andrews University, both published by Pacific Press, and Salvation: Contours of Adventist Soteriology, edited by Martin Hanna, Darius W. Jankiewicz and John W. Reeve, and published by Andrews University Press.

The problematic ideas in these books, he said, are 1) the concept of involuntary sin, 2) the unfallen nature of Christ, 3) salvation by justification alone, 4) justification as declarative, not transformative, and 5) the imperfectability of Christian character.

He also disparaged American Evangelical conservatism for morphing into conservative politics, for seeing legislative coercion as a substitute for salvation. He criticized Evangelicalism’s view of religious liberty as something only for themselves. Seventh-day Adventists believe in religious liberty for all. “We desperately need to return to our Adventist roots,” he concluded.

Pastor Larry Kirkpatrick, from the Upper Columbia Conference, who runs the website greatcontroversy.org, distributed a handout to refute the charges against Last Generation Theology made in the book God’s Character and the Last Generation (list synthesized from pp. 16-19, 272-281). He cited:

1. Misrepresentation that LGT teaches the conclusion of the Great Controversy as dependent on humans; Christ’s work being insufficient. The Actual LGT view, according to the handout, “In his sovereign wisdom, God has chosen not to end the Great Controversy War without first demonstrating the effectiveness of His power to overcome sin in the lives of fallen humans. The power that overcomes is the power of Christ. Christ’s work is sufficient to atone, and even the cooperation of consecrated, fallen humans is in no sense meritorious.”

2. Disagreement with the charge that LGT teaches the fallen human condition can be transcended in this life. Sin is chosen; fallen human nature in itself does not condemn. For the actual LGT view, Phil. 4:13 — “I can do all things through Christ…; 1 Cor. 10:13 — God is faithful, who will not allow you to be tempted beyond what you are able…; Jude 24 — “Now unto Him who is able to keep you from falling…” are quoted.

3. Disagreement with the charge that LGT teaches justification has a more-than-forensic meaning. Here a quote from Thoughts from the Mount of Blessing, 114, serves as the answer: “God’s forgiveness is not merely a judicial act by which He sets us free…but reclaiming from sin. It is the outflow of redeeming love that transforms the heart.”

4. Misrepresentation of the idea that LGT teaches humans must attain absolute perfection and thus will no longer need Christ. “LGT does not teach the attainment of absolute perfection by fallen humans. Human perfection is always relative to and less than divine perfection….There will never be a time through all eternity when our need for Christ ends. We will forever need the forgiveness He has extended for sins we have already committed, forever need His power for overcoming, and forever look to His example and pattern. Jesus is eternally essential for overcomers.”

5. Misrepresentation of the LGT teaching that Jesus must have been just like us. “LGT has always differentiated how Jesus is like and unlike us. Adventists in our first century emphasized that Jesus’ humanity was like our own — something unthinkable in popular Christianity with its teaching that humans are guilty because of original sin, and which protects Jesus theologically from having our kind of humanity.”

6. Disagreement on the LGT teaching the Second Coming has been delayed by human unconsecration. To provide the actual LGT view, several biblical texts were listed: Numbers 14:33 — “Your sons shall be shepherds for forty years in the wilderness, and they will suffer for your unfaithfulness…;” 2 Peter 3:11-12 — “Since all these things are to be destroyed in this way, what sort of people ought you to be in holy conduct and godliness…”; Mk. 4:28-29 — “First the blade, then the ear, after that the full corn in the ear. But when the fruit is brought forth, immediately He putteth in the sickle, because the harvest is come.”

Weimar Institute Chamber Singers under the direction of Erwin Nanasi led the congregation in lively hymns between presentations.

During the panel discussion at the end of the day, one of the questions asked was the difference between perfectionism and perfection. Perfectionism is the same as legalism, while perfection is the act of God working in people’s lives. Only God achieves absolute perfection. Character perfection for humans comes by surrendering one’s thoughts and feelings to Jesus.

Just as the theological discussion of the day had emphasized the importance of the human response to salvation, the presenters told the audience that they were responsible to make these ideas live in the churches of Adventism. “You are the ones, you are the witnesses,” the presenters said to the audience to conclude the program.

This was the first such seminar to be held, according to Event Organizer Danny Strever of lastgenerationforchrist.org. He worked with the Sacramento Central SDA Church in putting the event together with funding from the offering that was taken during the seminar. His dream is to hold similar symposiums “on every continent, in every region, and in every city worldwide.”

The presentations are archived here: https://livestream.com/saccentral/events/3378356

Editor's Note: This article has been corrected. George Knight's book is published by Pacific Press, not Oak and Acorn as originally stated.