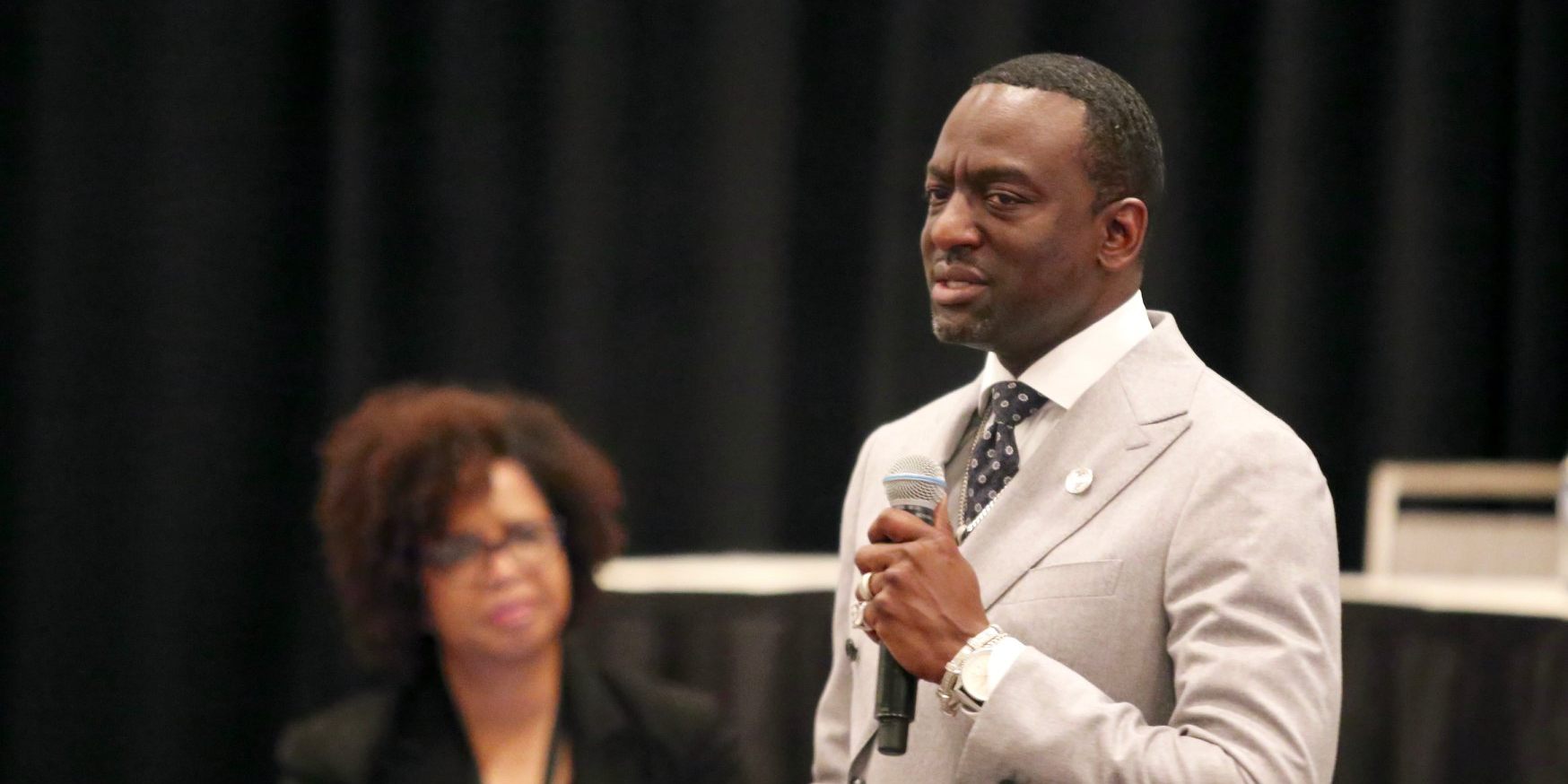 Speakers sought to inspire the audience of 200 to take the church’s message of hope and wholeness, and make a meaningful difference in their communities.

One of the sessions with a robust discussion asked the question “Can Religious Freedom and LGBT Rights Coexist?

Justin Giboney, AND campaign, executive team member explained that his organization is a Christian organization trying to get Christians to engage in politics more faithfully. “The emphasis for this organization was because we saw Christians allowing their political affiliations to influence their decisions on moral issues, even more so than scripture. If we are about Christians, we should be both about justice AND moral order. Our political landscape today separates them. On one side is Democrats and progressives who are all about social justice and other side you have Republicans and conservatives who are about moral order. But if we look at the gospel, how Jesus does things, Christians are supposed to be about both. We can’t choose between the two. We often talk about this in terms of compassion and conviction. When we look at an issue like LGBTQ, our conviction is what the Bible says, we’re not going to change our conviction — but have we showed compassion.”

Vice President and Chief Compliance Officer of Advent HealthCare, Dwayne Leslie, told why it was important for Adventists to get involved in the legislative process. “As Seventh-day Adventists, religious liberty has been one of our core tenets, but we’ve also believed we shouldn’t use the legislative process to enforce or mandate our philosophy. We’re not trying to legislate morality. We want to protect ourselves according to our theology, as opposed to using our theology to deny or take away the rights from other people.”

Tim Schultz, president of 1st Amendment Partnership told the audience that if we care about religious freedom, we have to care about social justice. “Any invocation of LGBT, some say we shouldn’t care. But in 28 states you can be fired from your job if you’re a LGBTQ person.” He further said that it was important that this group have legal protection.

Melissa Reid, executive director of the North American Division Religion Liberty Association, mentioned that her department is working alongside other faith communities to pass a legislation known as Fairness For All, which would protect both LGBTQ civil rights and religious freedom. “We’re now making visits to members of congress and think it will have bi-partisan support. Because of the diversity of our coalition group it adds to likelihood of bipartisan support.” Even though it may take a while to enact, Reid said, “we recognize that this is an opportunity to restore the idea of religious freedom.”

“Blessed to be a Blessing”

U.S. Senate Chaplain Barry Black, in his Sabbath morning sermon, used the story of the Good Samaritan to illustrate that we must have compassion on those in need. “If you’re going to have social justice, stop blaming the victim. Help people, even when they’re responsible for the trouble they’re in. This traveler got himself in trouble. He knew about the dangerous Jericho Road, but he still took it.

On Sabbath afternoon, the group journeyed on a sobering visit to Tabitha’s House, a human trafficking ministry of the House of Hope Church near downtown Atlanta. Margie P. Gill, executive director, explained that Atlanta is a major hub for sex trafficking and the youngest client they’ve helped was a five-year-old. “We want to give power back to the victims and restore lives, homes, and communities,” said Gill.

On Saturday evening, Yusef Salaam who was wrongly convicted of the 1989 assault and rape of a female jogger in Central Park spoke about serving years in prison for a crime he, along with four other youth, didn't commit. The highly publicized case was the subject of a Netflix movie, When They See Us, directed by Ana DuVernay.

Salaam, now a father of ten living in Atlanta, spoke softly of how he has been able to move on with his life. “Knowing you were born with a purpose; you were born brave. God gave you the means to survive and thrive. It’s not about what happens to you, but your response to what’s happening to you. God is in control. The sun shines on the sinner and the person who is filthy at the same time. But the blessing definitely comes to one who is faithful.”

Carmela Monk Crawford of Message magazine moderated a Q & A, and asked Salaam if he had forgiven all the people responsible for his imprisonment. “Forgiveness is a challenging concept. I’ve been able to forgive to a degree. I’m reminded, Forgive them, Father, for they know not what they do.”

On Sunday, the inaugural Lucille Byard Symposium was launched with Sherine Fraser Brown, Oakwood University’s chair of the department of Nutrition, Dietetics, and Public Health, as speaker. Brown discussed “Health Disparities: The Impact of Food Deserts,” illustrating that churches can engage with their community through a variety of avenues, including a simple yet effective project such as a community garden. She presented evidence to show that when we grow our own fruits and vegetables, we are more likely to eat more of these foods.

Ann Roda, Adventist Healthcare vice president for Mission Integration and Spiritual Care said they were proud to sponsor the symposium, in light of the fact that it was the Washington Adventist hospital which denied treatment to Byard, an African-American church member, back in 1943.

“Our team was shocked to hear the story and this was the catalyst for us asking, what are we going to do with this info?” she said. “We have to own our part, not shy away from it and commit to not letting this happen again.”

Going forward, Roda said that the local church and the Adventist Health System can play a huge role in addressing societal ills. “We need a clear partnership between the health system and the church. If we partner, we can change the paradigm of what it means to change our community.”

Edward Woods III, Lake Region PARL leader and chairperson of the Conscience and Justice Council said he hopes participants will take the information presented and put it into action. “It’s important to ensure there’s liberty of conscience and justice for all people, through a biblical and contemporary context that reflects the consciousness of Christ.”

The Conscience and Justice Council began in 2016 in Detroit and the next conference is scheduled for Los Angeles in Sept. 24-27, 2020. For more information, visit: https://cjcouncil.org/

This article was written by Debbie Michel and was originally published by the Lake Union Herald. It is republished here with permission.

Image: At the Conscience and Justice Council Conference, Yusef Salaam speaks about his experience of being wrongly accused of the 1989 beating a New York City jogger. Photo credit: D.L. McPhaull, courtesy of Lake Union Herald.