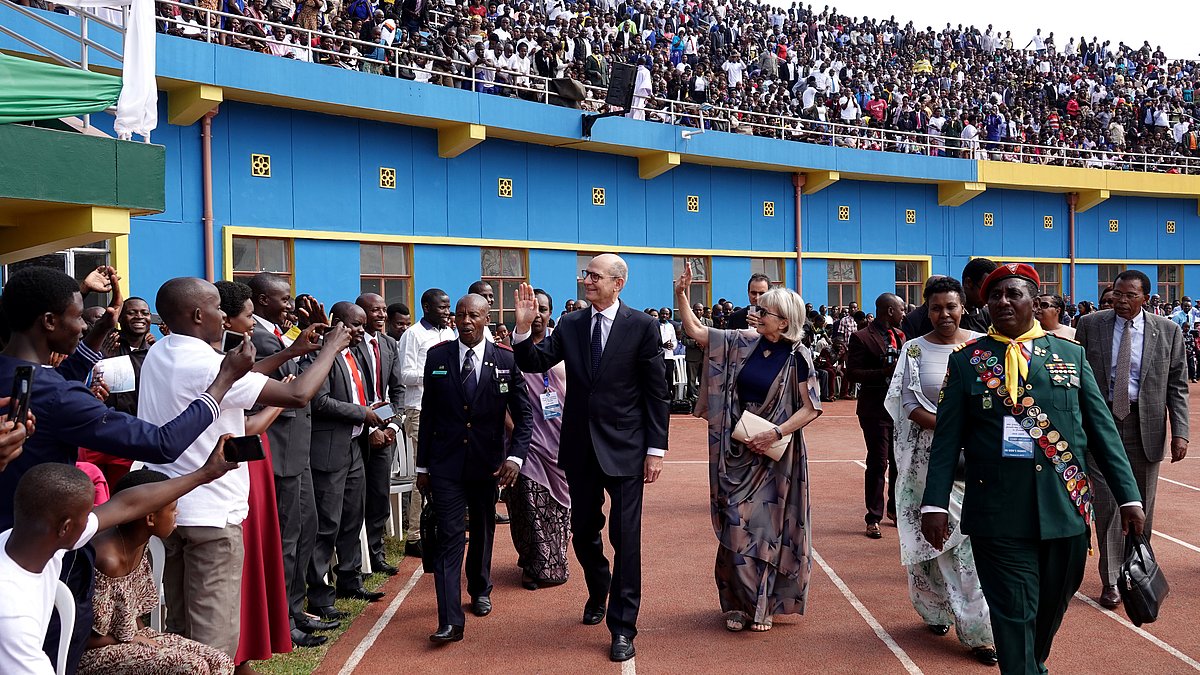 More than 40,000 Seventh-day Adventists in Rwanda flocked to the Amahoro National Stadium, located in the capitol city of Kigali, to celebrate 100 years of Adventism in the country.

President of the [General Conference of the] Seventh-day Adventist Church, Ted N.C. Wilson, preaching to the congregation on Sabbath, called the event “momentous” and reminded everyone of God’s leadership throughout the ages.

Reading from the book of Joshua, Wilson took them through the experience of the children of Israel and the crossing of the Jordan river. He focused on the stones of remembrance each tribe had to bear as a reminder of God’s miraculous salvation. Drawing from the theme of the celebration which was “In God’s hands,” Wilson urged Adventists in Rwanda to remain in God’s safe hands while preparing faithful reports for when He comes.

The 100 years celebration was also a time to pay tribute to the Adventist missionaries who arrived in Rwanda in 1919. Looking back on their commitment, Hesron Byilingiro, president of the Adventist Church in Rwanda, affirmed their legacy will never be forgotten. The missionaries, he said, had to integrate into a culture they didn’t know and learn a new language.

Byilingiro shared the gospel the missionaries carried through education and health was, in itself, a language that needed no translation. Byilingiro praised God for the Adventist message that transformed many lives in his country. He also commended local Rwandans who assisted foreign missionaries with whom they pioneered.

Since all of those who carried out mission in those years have since passed away, the awards were given to their descendants. Those whose relatives couldn’t be found were awarded in absentia.

The government of Rwanda was represented by two ministers and the Chief executive officer of the Rwanda Governance Board (RGB). In the name of her government, Judith Uwizeye, a minister in the office of the President of the Republic said the Adventist church is a good partner of the government of Rwanda because of its role in education, health and development.

Revisiting the gruesome genocide against the Tutsi in 1994, she reminded everyone that the church was not spared, but thanked God for saving the nation. She joined Wilson in reminding Adventists to continue being good citizens and a source of healing to the community.

The following day, the delegation from the Adventist World Church headquarters, and the leaders from East-Central Africa Division joined Adventists in Rwanda for their monthly community service known as “Umuganda,” after which they helped [provide] health insurance for 400 people who couldn’t afford it. While all Rwandans do community service on the last Saturday of the month, the government has allowed Adventists to do their part on every first Sunday of the month. The minister for local government, Anastase Shyaka reiterated to Wilson his government will always uphold religious freedom.