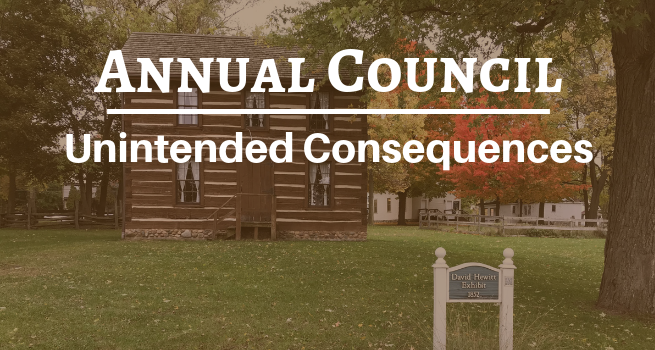 What began last week as a costume drama in the Adventist Historic Village Great Tent came to a close at noon on Wednesday in the Kellogg Arena of Battle Creek. The 2018 Annual Council Meeting of the General Conference Executive Committee will go down in history for the affirmative vote to create consequences for being “non-compliant” with church policies and votes. One of the unintended consequences of that vote occurred before the item even came to the floor.

On Sunday morning, when Treasurer Juan Prestol-Puesan reviewed the usual financial reports, he spent extra time explaining the most recent extraordinary tithe, including distributing a separate financial report on it. In 2007, he explained, when a family sold an international business and wanted to pay tithe on the proceeds, the conference, union, division, and General Conference together discussed what should be done and concluded that since the business being sold was international and since the money would overwhelm a local conference, the best way to handle this situation was to create a variance to regular tithe policy, where money starts at the local conference and is shared up.

This extraordinary tithe would be shared down from the General Conference with the worldwide church divisions based on approval of specific projects. Because tithe is tithe (not donor-directed contributions), divisions were invited to propose “gospel-sharing” projects for the money rather than just putting it into ongoing operational accounts. After all, this was extraordinary money received on a one-time basis. There was no interest in creating a situation where pastors were hired one year but then would not be able to be paid on an ongoing basis. And, since, the family that gave the extraordinary tithe in 2007 indicated that there would be future payments based on sales of various parts of the business, when the General Conference received the 2017 payment, it simply concluded it should be handled with the same variance.

However, since 2007, many if not all of the various people who had handled the first tithe payment were no longer around. Conference, union, and division presidents and treasurers had changed. The new people were not familiar with the details of the 2007 variance, and thought that the General Conference was “out of compliance” with the way it handled the money. The Oregon Conference Executive Committee wrote an open letter to the General Conference questioning what had taken place.

Prestol-Puesan’s explanation of the situation helped to soothe the waters, but one of the responses from the floor was that if the General Conference could vote a variance to policy for the use of tithe money, surely some kind of variance could be approved for local areas wanting equal treatment for all of their pastors in the sharing of the Gospel.

The Extraordinary Tithe Financial Report distributed to the Executive Committee details intriguing information about how the denomination used this extraordinary resource. Because this was a one-time event, the General Conference stipulated that the money be used for projects rather than recurring expenses, and because it was tithe, projects were expected to be about sharing the gospel. Media projects were particular favorites.

In the initial distribution of funds that took place in 2008, the Hope Channel received $1.1 million. Adventist World Radio got $4.5 million. There were distributions to each of the Divisions. The East-Central Africa Division received $3.5 million. Euro-Africa Division received $6 million. (At that time, the Middle East-North African Union was part of the Division. It has since been attached to the General Conference. Money to support the Israel field has been a particular emphasis of this fund.)

Three point eight million went to the Euro-Asia Division where Bible translation was a project. For the Inter-American Division $4 million was initially appropriated in 2008, with new allocations made in 2015 for servers and a satellite contract. To the North American Division went $3.5 million. Additionally, the Oregon Conference received $500,000, and the Carolina Conference received $500,000 for the Share Him evangelism project. Northern Asia Pacific Division received $5 million to be used in China which had just become open to religion, and $700,000 for Japan.

To reach people in the 10/40 window $3.79 million was spent on a worldwide system of satellites. The General Conference itself also received money that it used for a variety of projects such as $2.4 million to create “My Bible Guides,” the new Sabbath School curriculum for children, and $1.3 million for a Youth Department web initiative. But perhaps the most interesting line item is the one for “CRS Terminations and Legal” at $314,824.50. Terminations are a one-time expense, but it is hard to see how they qualify as “gospel-sharing.”

Prestol-Puesan’s presentation cleared the air on Sunday, demonstrating the power of transparency and openness. Later, the North Pacific Union Conference President, of which Oregon is a part, personally apologized to Prestol-Puesan for the misunderstanding created by the Oregon Conference letter.

The conversation surrounding compliance and non-compliance continued, however, in presentations from the General Conference auditor that indicated non-compliance is up 2% over last year to 83% of all entities. And later in a special item on the agenda regarding transparency and openness.

Since the terms of reference for the newly created Compliance Committees were not discussed at Annual Council, many questions remain. When will they be activated? What will trigger review by the committees? And if the committees are meant to be the last word, what will be the object of their review, the initial incident of being out of compliance or the way other entities have or have not handled this non-compliance?  As the conversation swirling about these committees continues, it seems the door has been opened for more unintended consequences in the future.