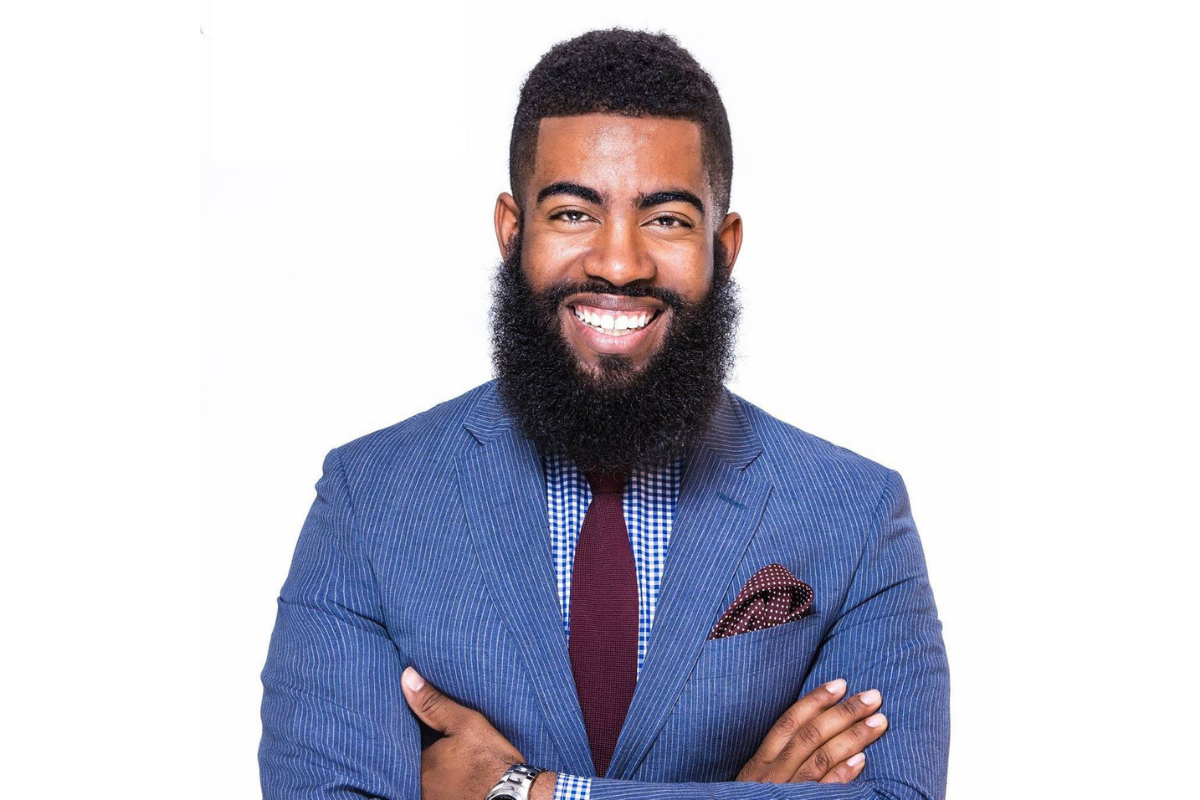 Joshua C. Nelson, a pastor in southwest Georgia, is not sitting around. He has started a community garden, recently published a book about ministry, been the subject of a film, is about to publish a training manual based on his doctorate in urban ministry, and is working on another book about restorative justice. In this interview, he tells us about some of the projects he is passionate about.

Question: You and your congregation at the Emanuel Seventh-day Adventist Church in Albany, Georgia, have started a community garden. Can you tell us about the Hope Garden initiative?

First, let me say thank you for highlighting what God is doing in our area. It means a lot to be able to share and testify on this platform.

The Hope Garden grew from a pure push from God. I had no motivation to plant the garden until friends I met in the community began encouraging us to start a garden project. When a friend of mine connected me with an influential farmer who wanted to use our church as a pilot for community gardens in the city, I knew I had to at least sit down and discuss the possibilities.

The biggest hurdles would be: support from members, funding, and irrigation. At our first meeting about the garden, our fellowship hall was filled with members of the community and church members who wanted to support the project. We reached out to Home Depot, wrote a grant, and were awarded $5,000. The best part was that Home Depot employees would build the garden beds for us.

Now we have 15 raised garden beds with tomatoes, squash, zucchini, peppers, okra, and other vegetables. I tasted a cherry tomato from the garden the other day — it was sweet and juicy!

Whose idea was the garden? Why did you feel it would be a good thing to do?

The garden idea came from God and He pushed three main individuals to make it happen. Myself, the friend I referred to earlier (Sherrell Byrd, Albany Business League Founder), and the local farmer (Farmer Fredo).

We wanted to do it because of the food desert my church sits in. The church is located in the middle of a large neighborhood on the east side of Albany. This part of town has been neglected by much of the city’s development plans. At least two grocery stores have closed in recent years.

Community gardens have done wonders in some depleted communities and we felt it would do wonders for ours.

What impact has the garden had so far?

We have met so many people who never even heard of our church before, but are now helping us with the garden. The support has been amazing and shows how truly unifying such a project can be.

I am hoping the church members begin to catch the vision and seize the huge ministry opportunities God is placing before us. For example, we plan to use the project as a way to promote health in the community. We believe this is a practical way for people to access healthy foods.

You mentioned community help. Who all does the work of gardening? Do you get out to plant and weed, too?

We have a schedule where three days out the week one of our three entities are tending to the garden. We are blessed to have an academy, a daycare, and a committed caretaker at the church.

I grew up in farm country and I am used to dirt and planting, so this has been extremely fun for me. I have planted, watered, and built, but so far we haven’t had any weeds come up yet! (We must have really put the weed barriers down right, I guess.)

Have you been involved in an initiative of this type before?

I have never done a community garden before but I led another community initiative called “The Lunch Box” when I pastored in South Carolina. This program was basically a year-round VBS/AYS/Pathfinder feeding program hosted in the city community center.

You are originally from Oakland, California. Why Georgia? I believe you studied at Oakwood, so you are no stranger to the south, but do you miss the west coast? How long have you been in Albany? How do you like it?

I’m a West Coast boy for sure and I miss it greatly, but I’ve only ever pastored in the south. I have been employed by the South Atlantic Conference for the past 12 years — ever since leaving Oakwood. Even though I have lived in the south for so long, every day is still a culture shock.

I have lived in Albany for two years and it’s growing on me. The city is very historic and has a lot of potential. It’s just going to take time to get the city there. While I have a vision to revitalize my church, I also have one for the city. I believe strongly in the people of God blessing the place where they reside. As the city grows, so will we!

Tell us about the Emanuel Church. How many congregations have you pastored previously?

I have been the pastor of six churches over the past 12 years (three two-church districts). They all have been different and Emanuel is no exception. Like many churches, its glory days are behind it.

There is a great need for growth and revitalization. Some radical changes need to take place, which require faith and bravery from the church leaders. We must find new methods to reach this generation.

I don’t think doing church the way we’ve done in our past is the answer. Since I’ve been here I have preached a turning back to the biblical model in Acts.

You have authored a book called In the Trenches — encouragement for people serving in ministry. Who published it?

I have an awesome publisher: Athea Shack with Watersprings Publishing. The book came out in 2018. It’s funny because I finished the book two years before and just was too afraid to print it.

Who is it aimed at? Why did you write it?

The book is aimed at myself, honestly. I wrote it as a reminder of how hard things were in the beginning of my ministry and as an encouragement during future hard times.

What feedback have you received so far?

A wide range of people have read the book and loved it. Many readers express how refreshingly open I am in the book. Others talk about how they can relate to my experience. And most like the theological and spiritual insight. If you’re a Christian and you’ve ever felt like giving up, you should read the book. (Hey, even if you’re not a Christian, give it a try — my Muslim friend bought one!)

I believe that Paul Kim produced a film about you called The Book of Joshua that was screened at the Sonscreen Film Festival. How did you come to have a film made about you? What do you think of it?

Yes, isn’t that insane? It’s so surreal. The North American Division approached me and interviewed me and felt I was a good fit for the project. It’s humbling, exciting, and a bit terrifying. I was super real on screen and put myself out there. I really hope it helps move the church toward an authentic conversation about the changes needed in Adventism.

What is the Hope Team? Is that to do with the garden?

Hmmm…how much should I say? The Hope Team is a vision of something that would transcend Adventism and how we do church. I can’t say too much just yet but we will see what God does with this group of spirit-filled individuals. And yes, the group is connected with the garden — hence “Hope Garden,” as I’m sure you gathered.

You seem to have so many projects on the go! What else are you working on that I have neglected to ask you about?

1. I just finished my Doctorate in Urban Ministry and I’m getting ready to publish my project manual. For my project I conducted an intervention between police and young black male high school students. The Faith Integrity Training manual will soon be published and offered to school districts and churches.

2. I am working on an online course for people interested in community organizing and activism.

3. Most exciting is another book I’m writing with my wife based on restorative justice. We hope to release it by the end of the year.

I find my inspiration in other passionate people, past and present. I love reading, so there are some really powerful books I turn to often. Some of those include: Letters to the Church by Francis Chan, The Little Book of Restorative Justice by Howard Zehr, and Draw the Circle by Mark Batterson. But mostly what moves me is a burden for the betterment of my people.

What do you love about being a Seventh-day Adventist?

I love Adventist culture. I love all the inside jokes, jargon, and the bond you feel when meeting others who grew up with similar traditions but live across the world. I love the teachings, the core pure essence of each doctrine that leads us to Christ.

What frustrates you about being an Adventist?

I am frustrated by how misused our doctrines have been. I am frustrated by how unknown our church is in mainstream media. I wish we could use what God has given us to spread the Three Angels’ Messages more effectively. But more than anything it frustrates me that we are so tied to non-biblical traditions and behaviors that are literally killing the spread of our beautiful last day message.

What goals do you have for the next five or 10 years? Where do you see yourself next?

In the next five to 10 years I will either be in a Seventh-day Adventist Conference successfully moving the future of Adventism to be more biblical and effective, or I will be doing something creative and effective. Honestly, I’m so focused on God’s vision that I don’t know what’s next…I hope the Second Coming. (Bam! Best Adventist end to an interview ever!)