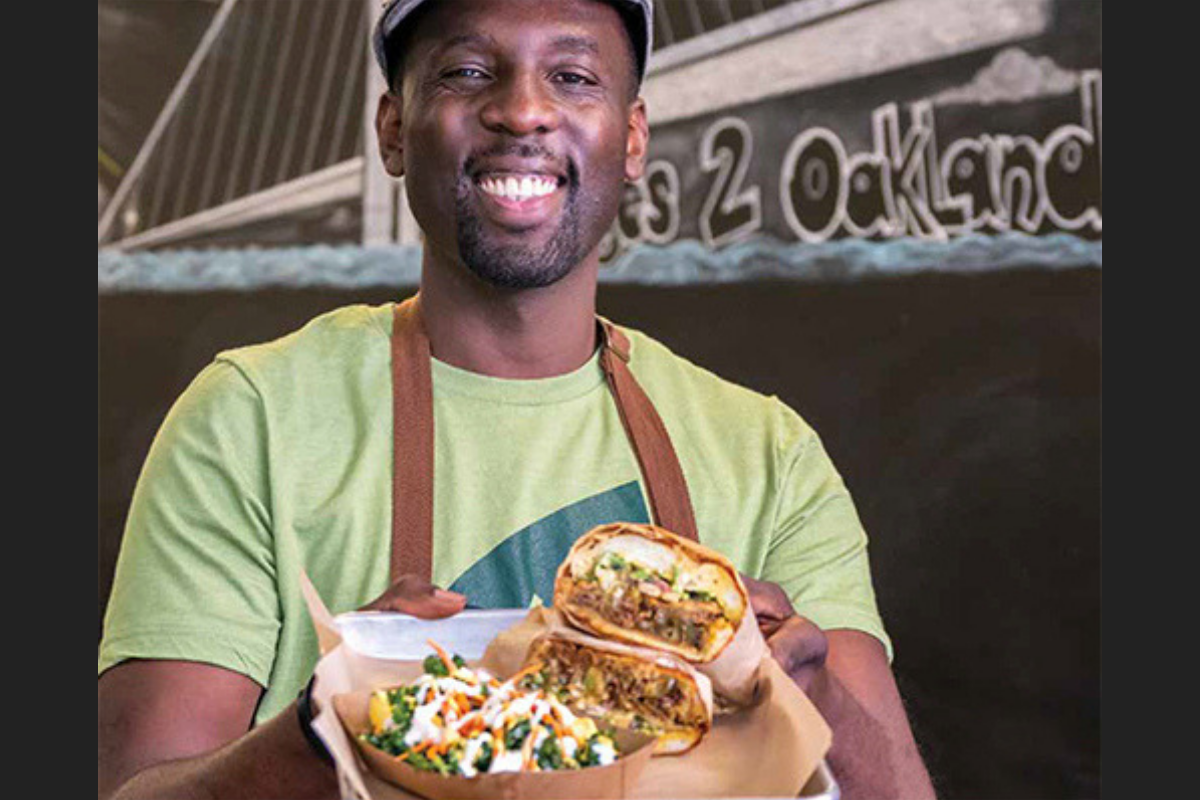 In The Veg Hub vegan restaurant in Oakland, California, Uno cards and Tabasco sauce bottles share equal billing in the small wire condiment caddies perched at the centers of several wooden tables. A chalkboard mural of the San Francisco-Oakland Bay Bridge festoons the far wall. Behind the front counter, across from the fresh vegetable prep station, steaming pots and pans boil and sizzle. A sandwich board bearing The Veg Hub name and logo is parked outside the restaurant’s unlocked glass doors.

It’s noon, and this center of influence is open for business.

For the past several years the Seventh-day Adventist Church has made special effort to reach people in the world’s cities. One of the church’s initiatives, the Adventist Mission Centers of Influence, is based on Ellen White’s counsel to “establish in all our cities small plants which shall be centers of influence.”1

According to Adventist Mission the idea is simple: start wholistic ministry centers in urban areas to connect the church to needs in the community. Ellen White mentioned restaurants in particular, writing that “hygienic restaurants are to be established in the cities, and by them the message of temperance is to be proclaimed. Arrangements should be made to hold meetings in connection with our restaurants.”2

Chew has always had a passion for entrepreneurship, missionary work, and food. Starting The Veg Hub restaurant as a center of influence in the community was a no-brainer. “We looked at our restaurant as being that kind of solution where you really get to mingle with people and you get to show sympathy because your customers come on a daily basis. We have some customers that come every day during the week when our restaurant is open,” said Chew.

The people who frequent The Veg Hub become friends. “One of my mottos in the restaurant is: ‘Friends First, Customers Second,’” Chew said. “We look to establish those relationships with our customers. Then we get to meet their needs. We do cooking classes and health education for kids all the way to adults. Those become foundational experiences. Then people begin to ask questions about our faith. The last part of the process in Christ’s method is that He won their confidence. Then He bade them ‘Follow Me.’”

Chew explained that the staff is well aware of the restaurant’s mission—and ready to engage. “We’re realizing, as we make friends, that friends talk,” said Chew. “Friends ask questions. ‘Why are you closed on Saturday?’ ‘Why do you do this?’ Those become the questions that people begin to ask as a result and as it relates to what we’re doing here in the restaurant. So for us it’s a gift. It’s a way that we can love people in a very practical way. We’re seeing the impact on a regular basis.”

For Chew, food, friends — and family — have always been important.

He grew up in rural Virginia, raised on meaty, comfort foods and family fellowship. Lots of home-cooked meals, cookouts, and special holiday celebrations with macaroni and cheese, ribs, fried chicken, ham, even squirrel.

His mother, who had been raised in an Adventist home but did not attend church when Chew was a child, sent him with relatives to church on Saturdays. Through this Chew was introduced to meatless meals and potlucks. “I had the blessing of vegetarian food since I was in the third grade—when I’d have this delicious vegetarian meal on Sabbath.”

Nostalgia and a firm desire to create good-tasting, healthful foods helped propel Chew toward what some may see as an unconventional ministry. “Because of those moments of my life, when I had those great dinners and those great conversations with my family, I look at food as this wholistic experience — loving your family and having those intimate moments around the food that you’re eating,” Chew explained.

“I realized that vegetarian food, if it is cooked properly, cooked deliciously, can be pretty amazing. I had this dichotomy of both experiences growing up, but the constant was family.”

Chew received a full scholarship to run track for Howard University in Washington, D.C., but about a week after he signed the scholarship, he broke his leg in a race.

“It was a turning point for me and my experience,” said Chew. “I wasn’t actually a Seventh-day Adventist at the time. But I’d grown up around them, and I decided to give my scholarship up so I could keep the seventh-day Sabbath. That was my first [conscious] decision to follow Christ, follow God, and follow this amazing Bible that I had learned about. I really didn’t know what to do, but as a Christian, that love relationship with Christ began to develop.” He took business classes in college, eager to learn how to start and operate a business. Soon he was baptized.

Chew’s love of cooking and Sabbath dinners combined with his love for God and desire to serve Him. “Very early on I began to get convictions about this being my lifework,” said Chew. “I began to read the writings of Ellen White about food — and the power of food — and John Harvey Kellogg and some of those things about the history of our church. I was really enthused by these discoveries. This began the early development of seeing that I could use food as a way for ministry.”

Chew left college and became a Bible worker/literature evangelist, selling literature and homemade granola and bread door to door. It seemed natural to Chew to take his passion for good food and the gospel message to the next level.

Tinkering with plant-based proteins as he experimented with different recipes, techniques, and processes to make meat substitutes, Chew opened a restaurant in Virginia that operated for several years, then moved to Arkansas. He continued to work on his meat substitute recipes and do ministry on a regular basis in churches and the community. He said, “Again, it was important having that dual ministry model, but also now connecting it with a community business.”

A conversation at the 2012 Adventist-laymen’s Services and Industries (ASI) convention charted a course toward what seemed inevitable: a restaurant as a center of influence for the Adventist Church.

With an entrepreneur’s drive and a pastor’s heart, Chew was operating a booth at the ASI convention when Marc K. Woodson, then executive secretary for the Northern California Conference (now conference president), stopped by. Woodson was impressed with what he saw, and excited about Chew’s vegan restaurant and ministry.

“He felt that that would be a great ministry model for Oakland,” said Chew. “In Oakland, they wanted to do something called Bridges to the Bay, which was reaching the cities of Oakland and San Francisco through practical love and service and ministry. That began our conversation in 2012; I ended up moving out here in 2014 to begin the journey.”

It took a few more years to secure funding from the General Conference and the North American Division and open the location on MacArthur Boulevard in the heart of Oakland’s dimond district neighborhood.

Today The Veg Hub proudly plates completely plant-based lunches and dinners Monday through Thursday. In addition to serving Philly cheeze steaks with original bar-b-Chew sauce, hubster fries, sesame kale salad, vegan fried chicken, and other savory dishes, Chew and the staff use the restaurant as a place for cooking classes and Bible studies. The restaurant partners with the Oakland public school district on several youth development programs. They prepare Thanksgiving dinner for the elderly at a retirement home.

“We see how the power of Jesus feeding the 5,000 can be done in today’s time frame through a vegetarian/vegan restaurant model.”

The Veg Hub has become known as a place that serves the community. “We’re more than a restaurant,” Chew said. “Most of our customers say, ‘They have great food. The food is delicious. But they also do classes. They love on you. When you come into the space, it feels like home.’ We really try to create, again, that experience where we’re a part of their family. We have food that’s going to help nourish them and is good for them.”

Said Chew, “Customers come for our mac and cheese. We’re giving them healthy comfort foods, things that they’re familiar with, but done in a way that they can enjoy without those off-textures and off-flavors — and at the same time, it’s more healthful, which is also important.”

The Veg Hub is described as a fast, casual restaurant that’s affordably priced with food that people are willing to come back for again and again. It’s also a place that influences the community through the classes, outreach, and Christian literature available to customers.

But Chew isn’t satisfied stopping there. “The reason we started a restaurant was with the end goal of creating a church plant,” he said. “Our long-term vision is to see a restaurant franchise where we have a vegan restaurant, the vegetarian restaurant model, in every urban center of the country. Within that, those urban centers become feeders to a church plant and to churches in the local community.”

Chew said, “God wants us to be in the community and serving great food. I just feel that that’s a part of who He is. . . . He fed the children of Israel in the wilderness with manna. This is the manna of the last days. Feeding people with great food, healthful food, but also loving on them. . . . We look at our restaurants as being feeders to creating church plants. We hope to see that become a reality in the next 10 years or so. We’ll see what God will do.”

Chew takes Ellen White’s words to heart: “Christ’s method alone will give true success in reaching the people. The Saviour mingled with men as one who desired their good. He showed His sympathy for them, ministered to their needs, and won their confidence. Then He bade them, ‘Follow Me.’”4

Chew added, “I couldn’t do ministry effectively if the food wasn’t good. People come to a restaurant because they want to eat delicious food. So the great thing about our restaurant is that I’ve been able to, as chef, create my own plant-based proteins. My own veggie meat. We’ve created some really amazing, delicious textures.”

In fact, Chew is working with Whole Foods to sell his plant-based “meat” product, Better Chew. The product launches into the market next year in Whole Foods and other local regional markets in California.

While there are challenges in the restaurant business every day, Chew relies on God. “There’ve been times in my life when just having the resources that were needed wasn’t always in view, but there are countless ways that God has always been on time,” he said. “God is teaching me how to trust in Him. I feel that it’s a lesson I still haven’t mastered. I don’t know if I ever will master it. But I feel that this process is helping me to see His love as I’ve never seen it before. My business, my ministry, is deeply connected with my faith.”

Chew added, “I’ve learned not to strive to be the greatest business in the world. Just strive to be who God wants me to be and be faithful to Him.” Chew keeps Matthew 6:33 in mind: “But seek first the kingdom of God and His righteousness, and all these things shall be added to you.”

As for the future, Chew said he continues to strive prayerfully to be a good husband, father, boss, businessman, and servant — used by Jesus. “I believe that every member should do the same. It’s a blessing when you can be used by God.”

Image: Chef GW Chew presents one of The Veg Hub's most popular sandwiches, a Philly cheez steak sandwich made with all vegan ingredients. Photo by Dan Weber, courtesy of NAD.