Who Built "The Arks"? 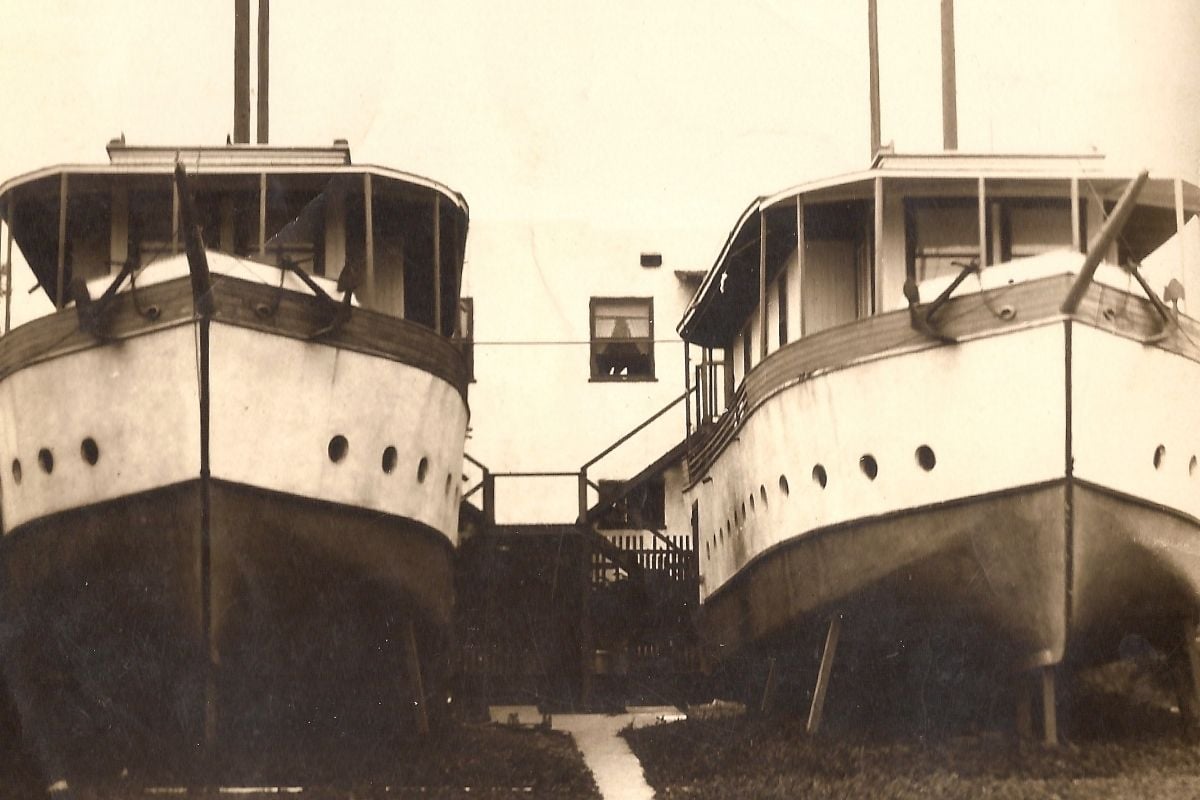 The Adventist Story of the Encinitas Boathouses

On October 12, 2019, residents of Encinitas, California, celebrated a momentous occasion—the listing of their beloved Boathouses on the US National Register of Historic Places. The unique pair of two-story, boat-shaped bungalows has attracted tourists to the coastal town ever since their construction ninety years ago. Few people, however, are familiar with the name of their architect and builder, Miles Minor Kellogg, let alone with his Seventh-day Adventist heritage and how it helped inspire the construction of “the Arks” in 1929.

Water had been a defining characteristic of Miles’s life from his earliest moments. He was born in Michigan in 1870, the grandson of the first mate of a commercial trading ship that cruised the Great Lakes. As Miles grew up along the shores of Lake Michigan, he developed an intense love for the water that culminated in his working as a wheelsman aboard a large steamboat by the age of twenty.

His career on the water was short-lived, however. When he married a year later, he gave it up in deference to his bride’s wishes and resumed his original occupation as a carpenter and builder.

Significantly, it was that summer that Miles and his wife Ruth experienced another life-altering event—their personal introduction to Seventh-day Adventism. Miles, unusually devout for his age, had already been a Church of God lay minister and was “a deeper than average student of the Bible”[1] when they began attending a series of tent meetings that was then being held near their town of Benton Harbor, Michigan. After earnestly listening to the evangelists’ message, Miles started studying the Scriptures with a local Adventist minister. That fall he and Ruth attended a camp meeting in Lansing, where they heard sermons from Ellen White and John Norton Loughborough.[2] Soon afterward they both joined the Adventist Church.

In exchange, the Adventist Church offered Miles previously undreamed-of opportunities. Frank Hutchins, one of the Benton Harbor evangelists, was preparing to go to Central America as a missionary when he met Miles in 1891. Hutchins, impressed by Miles’s religious fervor, recommended that he consider a career in the ministry. Anticipating the usefulness of a ship’s carpenter on his travels, Hutchins also asked Miles to accompany him abroad as tent master. The invitation sorely tempted Miles, who recognized it as a prime opportunity to simultaneously fulfill two of his greatest dreams—to serve his church and to build a boat of his very own, one that, in this case, would ferry him, his family, and the missionaries throughout the Caribbean. Unfortunately, family obligations stood in the way, and it was with considerable regret that Miles turned down the offer.

Not one to indulge in self-pity, Miles continued to be an active witness for his faith, wherever he lived. In rural Minnesota he engaged in self-directed lay evangelism by organizing and delivering lectures about Sabbath keeping. In Colorado he worked on Dr. Kellogg’s Boulder Sanitarium and donated real estate for the construction of a new church.[4] Such faithful service ceased only after some ill-natured gossip, circulated by church elders, wounded him so deeply that he left the Adventist Church in the early 1900s, never to return.

Yet even after this parting of ways, Miles’s religious faith remained fundamentally influenced by Adventism. He continued to witness to friends and neighbors about Adventist interpretations of biblical prophesies, he wrote skits whose dialogue was inspired by passages from Ellen White’s Patriarchs and Prophets, and, much later in life, he even attained a tentative reconciliation with the organized church.

At the same time, he never forgot his lost trip to Central America—or his dreams of building a boat. He had established himself as a successful builder and contractor in Encinitas, California, when he took a trip back to Michigan in 1925 that fully revived these old longings. As Miles attended Sabbath services in the same Benton Harbor church that he had built thirty years earlier, his thoughts could not help but be drawn back to his younger, more carefree days when building boats and sailing the world had seemed very real possibilities. Boats were still on his mind a few years later when, in the fall of 1929, he decided to repurpose some oddly-shaped lumber from Encinitas’s demolished Moonlight Beach dance pavilion and its attached bathhouse to construct the now-legendary Boathouses. Miles Minor Kellogg pictured with his wife Ruth, around the time of the Boathouses’ construction [photo courtesy of Rachel Brupbacher]

The two boat-shaped dwellings instantly drew attention from throughout California’s South Coast—especially from the press. The editor of Encinitas’s Coast-Dispatch could not resist taking a jab at the famously devout Miles by drawing a comparison between his Boathouses and Noah’s Ark. This comparison was then extravagantly embellished by the more influential San Diego Union, which portrayed Miles as a religious eccentric who had built the architectural oddities “believing the world soon was to come to an end by flood, as the Bible records in the story of Noah” and had “offered them for sale to ‘the faithful.’ ”[5]

Miles was, predictably, appalled—on behalf of not only his own reputation but also that of his God. He submitted a scathing rebuttal to a rival newspaper, in which, among other things, he corrected the scriptural fallacies perpetuated by the Union and reminded readers both of God’s promise to never again destroy the earth by water and of the scriptural passages that prophesy the end of the world by fire. However, he received little reward for his pains. The story of a modern “Noah” and his “arks” was too good for other periodicals to pass up, and it quickly spread throughout the country. Miles was still vainly battling his reputation as a builder of arks at the time of his death in 1933.

Even now, after nearly a century, the Boathouses’ true history remains largely obscured by lore. Many of their admirers still believe in the story of a “Noah” architect and assume that the “Ark” nickname is a mere allusion to the Boathouses’ “mooring” on high terrain, imitating Noah’s ark when it came to rest on Mount Ararat.

Nevertheless, Miles’s religious legacy, just like the Boathouses themselves, has survived the passage of time intact. Nearly all of his nine surviving children chose to follow his early example of dedicated church work. The oldest son, Chester, became an ordained minister and served as president of present-day Southwestern Adventist University in Keene, Texas. Another son, Murl, helped finish the dormitories of the fledgling Sunnydale Academy in Centralia, Missouri, in 1947. The youngest son, Miles Justus, supervised, almost singlehandedly, the construction of Sunnydale’s administration building and gymnasium in the 1940s and 1950s[6] and also built the current Adventist church in Douglasville, Georgia. One daughter, Vera, composed religious music that Del Delker performed over the radio, while another, Dorothy, became an evangelist’s wife.

Today, Kellogg descendants continue this pattern of faithful service as they work in Seventh-day Adventist administration, ministry, and healthcare and as they live their lives in the same hope of a heavenly future that Miles envisioned in a poem that he wrote shortly after the Boathouses’ construction:

Christ, Himself, did so declare.

In His Father’s many mansions

He has gone forth to prepare.

A thousand years to live in heaven,

And this earth by fire is cleansed.

Then to it we shall descend.

Job, the prophet, did declare—

And be welcomed by Him there.

Though the worm destroy this temple

And we again return to dust,

We shall be giv’n renewed bodies—

He is faithful, true and just.

In that glorious world made new.

We shall ever love and praise Him

All the countless ages through!

Where the lamb, the wolf and lion

Dwell in peace there side by side

And a little child shall lead them—

You can read more about this story in Rachel Brupbacher’s book, Miles Minor Kellogg and the Encinitas Boathouses (The History Press, 2021). [2] This was just before the prophetess’s departure for Australia.

[3] Miles and Dr. Kellogg considered each other relatives. During a conversation about their respective family trees, the two men concluded that their fathers had been second or third cousins. Subsequent research suggests a more distant connection.

[4] Miles also built many of the houses that grace present-day Boulder’s historic districts.

[6] Both of these buildings continue to stand the test of time and are still used by Sunnydale’s current campus population.

[7] These are the final stanzas of Miles’ poem “We Shall Sleep,” edited slightly for readability.

Rachel Brupbacher is a great-great-grandaughter of Miles Minor Kellogg. She holds degrees in French, German, and history. In keeping with the Kellogg family’s rich tradition of music making, she is also an accomplished, classically trained singer, violinist, and violist.

Title image: the Encinitas Boathouses shortly after their construction [courtesy of Rachel Brupbacher].