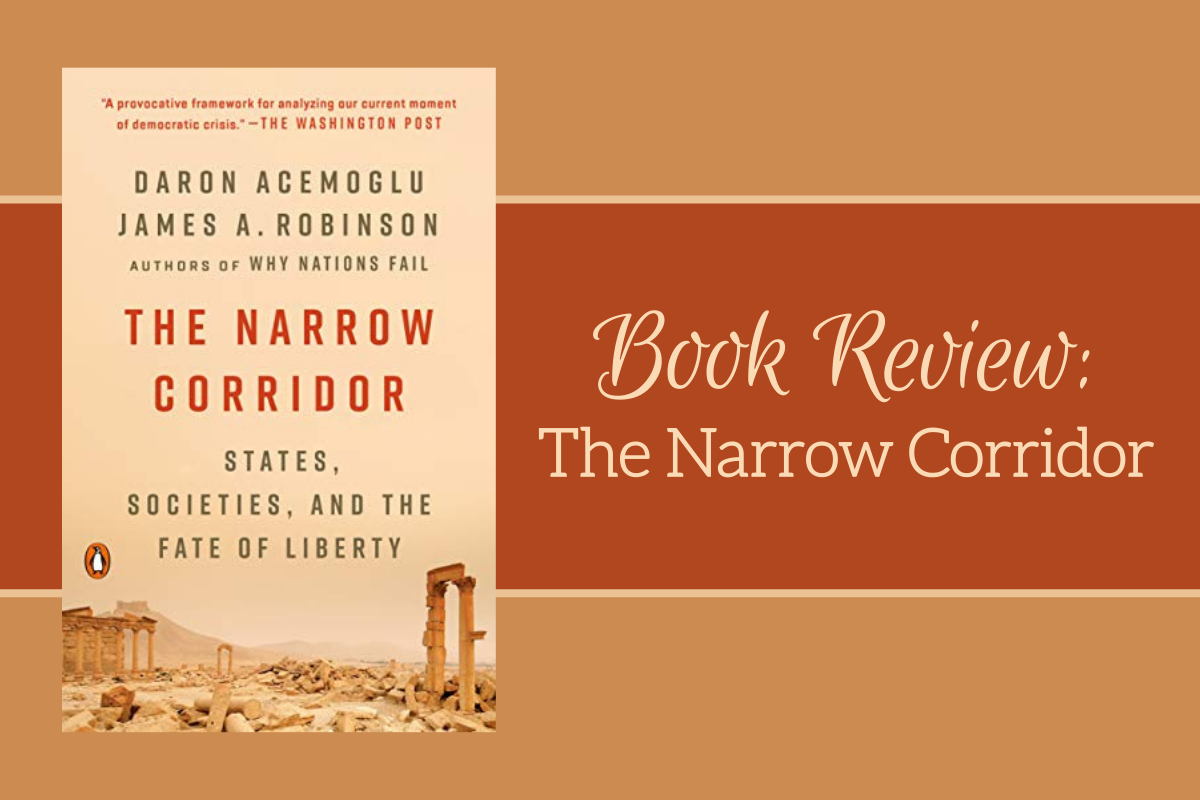 Author Note: This review was written the week before the storming of the Capitol Building on January 6, 2021. That event only serves to emphasize the fragile nature of “the narrow corridor” for democracy and liberty. This update was written on January 12, so we still have inauguration day as one of the next tests for democracy in America.

The Narrow Corridor: States, Societies, and the Fate of Liberty by Daron Acemoglu and James A. Robinson (Penguin, 2019).

In this follow up to their monumental Why Nations Fail: The Origins of Power, Prosperity, and Poverty (2012), Daron Acemoglu and James A. Robinson draw general lessons from copious examples on the subject of what makes nations function best — that is, for the welfare and liberty of their citizenry. The preface begins as follows: “This book is about liberty, and how and why human societies have achieved it or failed to achieve it. It is also about the consequences of this, especially for prosperity.” You might describe the book as a secular Great Controversy: “We look for clues about how society works not in God-given laws, but in basic human motivations and how we can shape them” (11).

Along the way — and the way is 500 pages long — the authors address such intriguing questions as:

• Why Argentina, while presenting itself in many ways as modern and democratic, is far from a thriving country.

• Why Turkey has become increasingly autocratic since the early 2000s.

• How the caste system has affected the development of India.

• Why most developed nations have a national healthcare system and the United States doesn’t, and what the implications of that are for the strength or weakness of the society.

• The effect of populism and erosion of democratic norms in the recent history of the United States.

And, as they say in late-night infomercials, “so much more!”

One of the tricks for a book like this is to find the sweet spot between finding general “laws” from many diverse examples and paying sufficient attention to differences between examples. A too simplistic model could lead to cookie-cutter predictability and lack of credibility, while too much attention to the variables of each historical situation would prohibit the extraction of general lessons. I think the authors did well with their balancing act — an apt metaphor, as the core of their thesis is that a good state requires a delicate and ongoing balancing act between the power and capability of the state, on the one hand, and the simultaneous power of society to hold the state in check and guarantee basic human rights and decent minimum standard of living for all citizens, on the other.

To further explain the authors’ ideas, it will be necessary to go over their core vocabulary.

This term, borrowed from Thomas Hobbes’s Leviathan (1651), stands for the power and capacity of the state. A well-functioning country requires a substantial bureaucratic presence to preserve law and order, settle disputes, administer justice, provide social services, conduct appropriate oversight on financial institutions, do diplomacy, and many other things.

Countries without a sufficiently strong state end up with such problems as a poorly functioning economy, low standard of living, poor infrastructure, lots of tribal feuding, and no social safety net. The authors refer to such countries as having an Absent Leviathan. Sample countries or people groups in this category, according to the authors, include Lebanon, and the Akan people of modern Ghana and Côte d’Ivoire.

Countries with a strong state apparatus but inadequate checks on their power suffer from such problems as extreme income inequality, lack of innovation, and general lack of human rights. Prime examples would be Russia and China. These countries are described as Despotic Leviathans.

Then there are countries with elaborate but inadequately functioning bureaucracies. A number of countries in Latin America are put into this category and are called Paper Leviathans. In the Paper Leviathan, the “state is arbitrary, creating uncertainty and frustrations, manipulating and disempowering people who are reduced to waiting and begging. There is an absence of routine, there are endless exceptions; when does the office open? What are the procedures? What documents do I need? Nobody is ever really sure.”

Finally, there is the “good” state, where the Leviathan is extensive and capable, but also restrained by laws and guaranteed rights and democratic participation — in short, a strong society. The authors refer to such states as Shackled Leviathans.

While the Leviathan is the authors’ term for the power of the state, The Red Queen is their label for the power of society. The term is derived from Lewis Carroll’s Through the Looking-Glass, and is used because Alice and the Red Queen race side by side without going anywhere. The authors reasoned that this fact would nicely illustrate the power of society to keep pace with the Leviathan and exercise appropriate control over its power, aka the “Shackled Leviathan.” In polities without an active social participation in governance (non-democratic countries), the Red Queen is not sufficiently powerful. I have to confess I found this term mildly annoying, as I had a bizarre image of Queen Victoria in burgundy, running in place, whenever this term was mentioned, but it did help me retain the core concept.

Now to the key term of the book. When state capacity and power are well developed, but also appropriately shackled by an active and broad social participation in defending human rights, liberty, and services, a country enters “The Narrow Corridor,” a state where citizens have the greatest opportunity to flourish. The authors state that “it is clear that liberty has been rare in history and is rare today. Every year millions of people in the Middle East, Africa, Asia, and Central America flee their homes and risk life and limb in the process, not because they are seeking higher incomes or greater material comfort, but because they are trying to protect themselves and their families from violence and fear” (xiii). The corridor is narrow, and to stay in it requires a continual balancing act between state power and society’s power to keep the state healthy but shackled.

After setting up these basic definitions, the authors spend the rest of the book testing them and applying them to different countries in the past and present. They have a whole chapter, “Devil in the Details,” pointing out how each country is different — in geography, resources, history, and leaders — and how these differences move countries toward or away from the Narrow Corridor.

In chapter ten, entitled “What’s the Matter with Ferguson?” the authors discuss the dangers of American exceptionalist thinking, using the shooting of Michael Brown, against a history of well-documented “excessive force” on the part of the Ferguson police, as a starting point to discuss how the United States has balanced state and federal power. Partly because our country was formed out of thirteen independent colonies, which were wary about giving up any of their independence even to fight the British, our government from the beginning put in place severe limitations on Federal power. These limitations have in some cases protected liberty by keeping the Federal government in check, but also made it easier for states to secede in the Civil War, for Jim Crow to thrive, for it to be difficult if not impossible to adopt a national healthcare service, and so on. It would be easier to fight economic inequality and provide better public services, the authors suggest, if some of these duties were placed more squarely in federal hands.

On the other hand, the Federal Housing Authority’s practice of redlining — limiting or eliminating legitimate mortgage loans in neighborhoods with Black residents — was a significant factor in creating run-down neighborhoods and greater economic inequality between persons of color and whites. The authors argue that although America has certainly provided opportunities and liberty for many people, much work remains to be done in terms of access to quality education, neighborhoods, healthcare, race relations, and equitable taxation.

It is discouraging to read about so many countries treating their citizens so badly throughout history, and even in the relatively “good” United States, we are facing very significant challenges. The extreme partisanship, mistrust of the other side, inability to compromise, and lack of trust in public institutions and leaders (often with good reason) are all threats to continued existence in the Narrow Corridor. Unfortunately, there have been so many leaders (and their enablers) throughout history who have sought their own good at the expense of the people. From a Christian perspective, we can see this as the result of sin and selfishness of the human heart, but with the help of books such as The Narrow Corridor we can also see how that selfishness is moderated in some social systems and exacerbated in others. There is definitely value in advocating for the best way to serve the good of the people through the structure of the state — in addition to caring for the wellbeing of our “neighbors” on an individual basis.