I Was Hungry: Cultivating Common Ground to End an American Crisis — Book Review 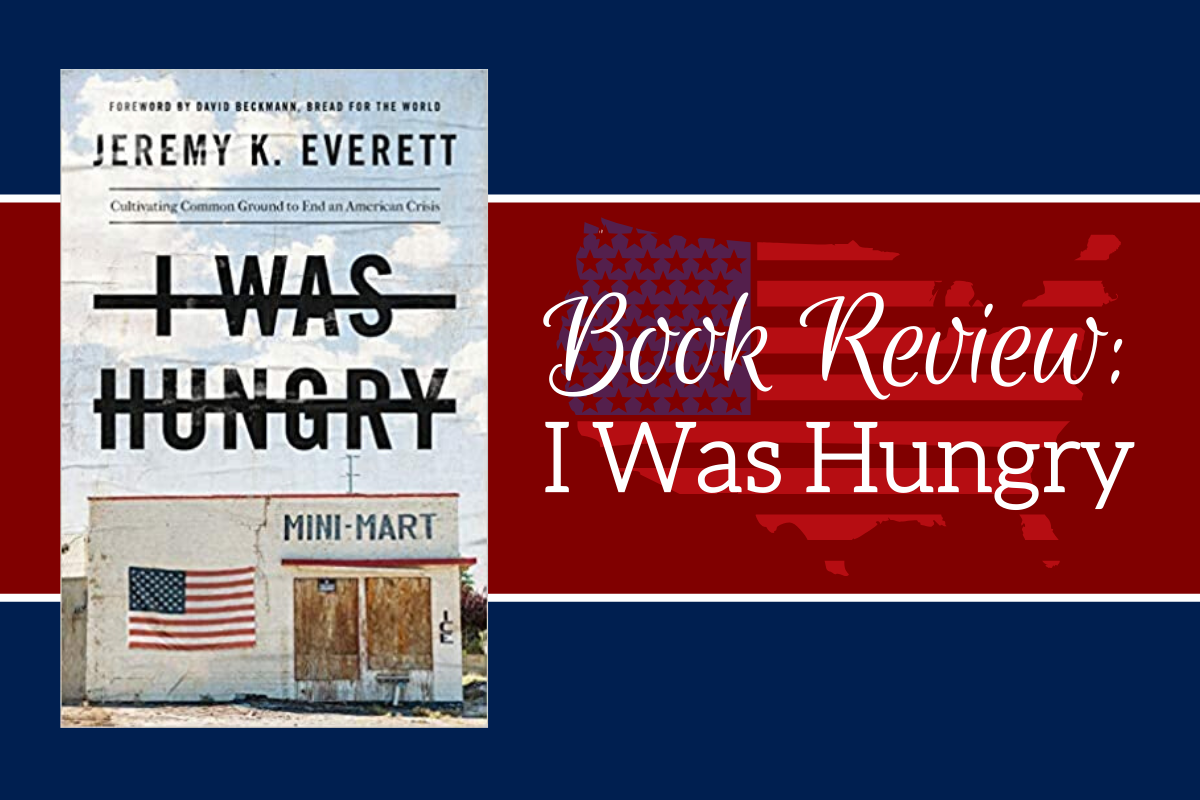 With the shadow of COVID-19 hanging over the planet, everything not related to ventilators and testing and self-quarantining tends to get pushed to the background, but Jeremy K. Everett’s valuable book, I Was Hungry: Cultivating Common Ground to End an American Crisis (Brazos, 2019), should not be lost in the shuffle. For those of us in the middle class with reasonably secure jobs, our daily bread is assured unless things get considerably worse, but for those on the margins of society, the poor, the undocumented, senior citizens, the newly unemployed, getting a good meal or two a day will be increasingly challenging. According to Everett, the 2009 recession “caused hunger to skyrocket” (122), and the current situation will certainly cause disproportionate hardship to those on the margins.

Is that fact something that those of us with robust supply lines can just wash our hands of (twenty seconds!) and be done with? Not according to Matthew 25, from which Everett (MDiv, Baylor University) gets his title: “I was hungry and you gave me something to eat.” Not according to Franklin D. Roosevelt, who Everett quotes as saying “The test of our progress is not whether we add more to the abundance of those who have much; it is whether we provide enough for those who have too little” (18). Not according to Isaiah, who says to the Israelites “share your bread with the hungry, and bring the homeless poor into your house” (Isa. 58:7, quoted by Everett).

Ok, so maybe not into your house right now, under quarantine, but the poor are our responsibility. In a transformative experience as a seminary student, Everett had the opportunity to meet Father Gustavo Gutiérrez, widely considered “the father of liberation theology” (38). At the end of a substantive conversation, he asked Gutiérrez “How does one have solidarity with the poor?” Gutiérrez replied, “Commit your life to their cause” (39). Everett committed.

The author is the founder and executive director of the Texas Hunger Initiative (THI), “an organization that partners with the US Department of Agriculture, Texas state agencies, the corporate sector, and thousands of faith- and community-based organizations to develop and implement strategies to alleviate hunger” (back cover). What you will notice in the description of THI, and one of the most compelling points of the book, is that THI coordinates the efforts of many sectors of society so that their collective effort can be the most effective in remedying a broad-based serious problem — as we are trying to do now with the pandemic.

Everett calls feeding the hungry the “broken streetlamp” of social problems, meaning it is a clear and identifiable problem that can be fixed with a clear solution — providing meals (22). Problems such as underemployment, poverty, and access to health care are more difficult to solve and there is more disagreement about possible solutions. So, Everett argues that focusing on feeding the hungry first is a way to build coalitions across political, religious, and public sector/private sector lines, and doing so will prepare us as a society to tackle more difficult problems down the road.

Along the way, Everett tells many interesting stories, some tragic and some very inspiring, about his experiences as a student, living among the poor, building a grocery store in one poor neighborhood and a coffee bar in another — where candidate Barack Obama had coffee in 2008. He also talks extensively about the challenging work of building coalitions from different sectors of the social fabric, trying to create win-win solutions and organizational coordination between many partners, in order to seriously and effectively address hunger, also known as “food insecurity.” Everett begins his book with a comparison of the chaotic ad hoc societal response to Hurricane Katrina in 2005, and contrasts this with the much improved and better coordinated response to Hurricanes Ike and Gustav in 2008. His point, one which he develops throughout the book, is that coordinated response “made the difference” (7).

According to statistics cited by Everett, nearly forty million Americans are food insecure and one out of six children in the US lives in a food-insecure household (9). To those who ask, “well why don’t the poor just get a job or get a better job?” Everett says that “the realities of hunger and poverty are complex” and poor people often have to make choices such as “purchasing food or medicine, paying for housing or making a car payment, and so on” (10). Many of us who are better off like to congratulate ourselves on our achievements, without recognizing the considerable social advantages that helped us to achieve them and the considerable social disadvantages that have limited opportunities for the poor. For instance, people in minority households are twice as likely to experience food insecurity as those in Anglo households (48), and the hunger rate in households headed by a single mother is four times the rate for households headed by a married couple (47). Everett concludes his section on blame by saying “Not taking personal responsibility is certainly a problem, but it is much less of one than we have been led to believe” (50).

In his conclusion, Everett highlights a mindset that may be keeping us from doing more to help the poor:

I greatly appreciated Everett’s book. It’s short, but packed with good stories and important overarching principles of moral social behavior and ideas about how to organize moral impulses into effective outcomes. When Jesus says, “the poor you will always have with you” (John 12:8), we might be tempted to say “see! it’s an intractable problem, so don’t get too worked up about it.” After reading this book, it seems to me like a big part of the reason they will always be with us is because those of us who are better off are not doing enough to help them.