Exactly as You Are: The Life and Faith of Mister Rogers — Book Review

Exactly as You Are: The Life and Faith of Mister Rogers — Book Review 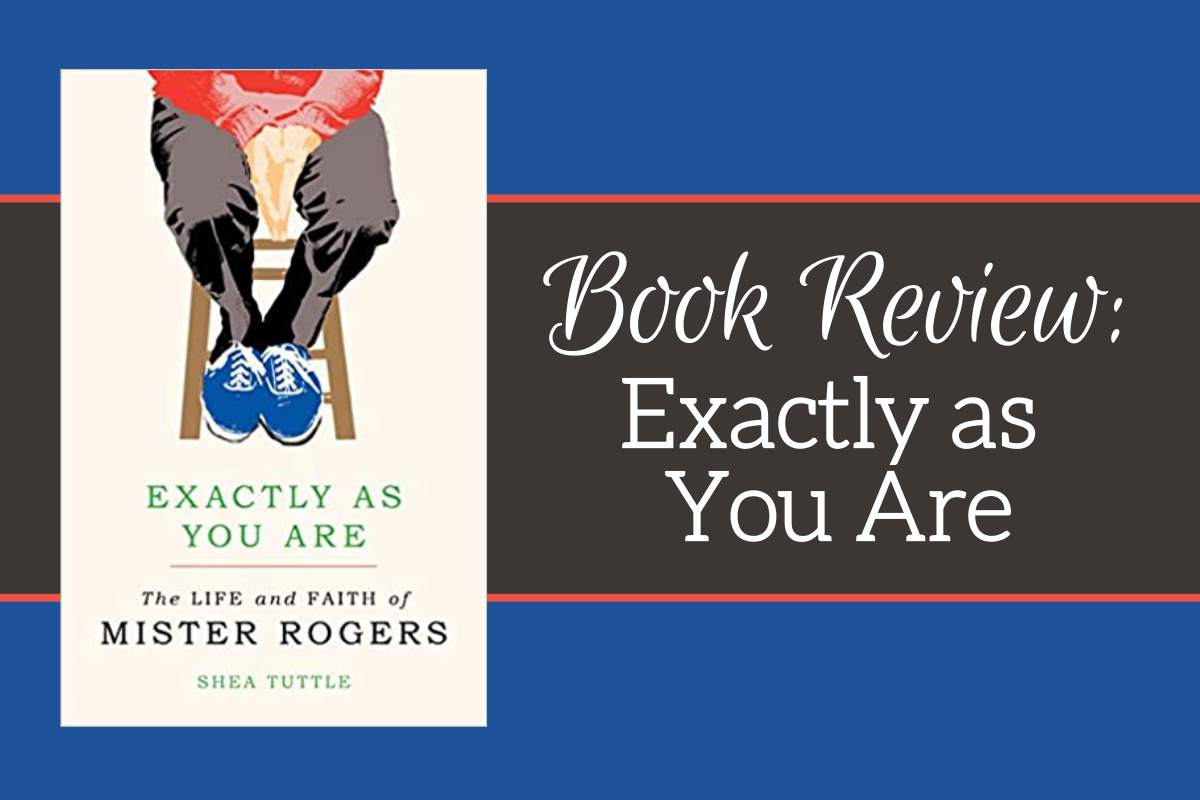 “When we hear the word that we are not lovable, we are not hearing the word of God. No matter how unlovely, how impure or weak or false we may feel ourselves to be, all through the ages God has still called us lovable” —Fred Rogers, as quoted in Exactly As You Are by Shea Tuttle (24-25).

Like many kids my age, I grew up watching Mister Rogers’ Neighborhood. I didn’t know anything about Fred Rogers outside of his steady, calming presence and menagerie of puppet friends who greeted me each weekday after school, and my knowledge of him hadn’t increased much over the years before I read Shea Tuttle’s delightful book, Exactly As You Are: The Life and Faith of Mister Rogers (Eerdmans Publishing 2019).

Tuttle shines a spotlight on this quiet, enigmatic man, and I found myself engrossed in the story of his life and faith that unfolds in her brief and engaging book. Biographies have been written before on Rogers, but none that focus specifically on his deeply-held faith and the way it shaped Mister Rogers’ Neighborhood. “Without using overt language of faith on the air, Mister Rogers relentlessly preached his gospel: you are loved just the way you are,” writes Tuttle (4).

Ordained as a Presbyterian minister in 1963, Rogers was “given a special charge to minister to children and families through mass media” (3-4). It was a charge he took seriously, and his focus was most often on helping children process the intense emotions they felt. “God cared, Fred believed, enough to be among us and to feel every human feeling, and so Fred worked hard to be with children in their feelings, to explain and alleviate when possible, but more importantly, to take seriously — as seriously as God becoming human” (14).

As an overweight and extremely shy child, Rogers was often bullied, and childhood was a lonely existence for him. By high school he had found his social footing and began to thrive, but he never forgot the loneliness and the emotions of his younger years, and this undoubtedly fueled his dedication to children’s unique emotional needs as an adult working in television. Another incident that shaped Rogers in adulthood was a traumatic hernia repair surgery his 16-month-old son endured. Fred and Joanne Rogers, and especially their son Johnny, were so emotionally damaged by the way he was treated by hospital staff that Rogers “devoted the rest of his life to issues of separation, to preventing trauma and alleviating anxiety, to honoring children and strengthening families” (68). Tuttle explains further,

“Mister Rogers’ Neighborhood dealt with common childhood experiences such as hospital stays, sleepovers, and daycare. The program also addressed the separation that occurs in divorce and in death. And Mister Rogers ended each day’s episode reminding children that he’d come back. Meanwhile, Fred worked with hospitals to put child- and family-centered policies in place, and he connected personally with families who had experienced similar trauma” (68).

Tuttle also discusses Rogers’ attempts early on to get the church engaged in children’s television programming. Though “Fred was certainly disgusted with what children’s television was often used for” (73), he also recognized the opportunity it presented for the church to have “enormous reach and impact” and to “correct much of what was potentially harmful in the medium when driven by the values of secular culture” (72). Unfortunately, despite passionate appeals from Rogers to the Presbyterian Church, it “didn’t fund any version of Mister Rogers’ Neighborhood” (73-74). Tuttle quotes Eva Stimson, who speculated in an Adventist Review article published in 2000, that

“if the Presbyterian Church had found the money to work with Fred, they ‘might be known today as a trailblazer in TV evangelism. On the other hand, the constraints of working within a church bureaucracy might have had a stifling effect on Rogers’ creativity.’ And the Neighborhood (or its Presbyterian analogue) almost certainly would’ve had a smaller audience” (74).

Indeed, Tuttle writes that she thinks “Fred was grateful...in retrospect, that his pleas to the Presbyterian Church went unanswered” (78). It was very important to Rogers that nothing he said or did would cause a child to ever feel excluded, and having a denomination-specific or overtly religious tone might do that very thing, he explained to Terry Gross in a 1985 interview on Fresh Air.

This dedication to creating an inclusive environment extended not just to his television audience, but to the individuals who worked alongside him on set. “Difference is an integral part of any neighborhood, and Mister Rogers’s casual yet persistent presentation of it was meant less to highlight and more to normalize,” writes Tuttle (111). From the first week of his program, African American adults and children were featured in the Neighborhood, and in 1968, François Clemmons became a regular cast member. An opera singer in real life, Clemmons played a police officer in the Neighborhood, and was “one of the first recurring African American characters on a children’s television program” (111-112).

And in 1969, in the midst of the turbulence of the Civil Rights Era, Rogers and Clemmons shared what has become “one of the most famous moments” in the history of the show: two men — one white, one black — soaking their feet together in a baby pool on a hot summer’s day, the camera zooming in to capture their feet side by side. “Sometimes just a minute like this will really make a difference,” Rogers says casually to Clemmons. Tuttle explains the context:

“In 1969, plenty of places in the South (and not-so-South) were still struggling to integrate. Just five years earlier, on June 18, 1964, black and white protestors jumped into the whites-only pool at the Monson Motor Lodge in St. Augustine, Florida. In retaliation, the owner of the hotel poured acid into the pool. Many people believe that the horrific television footage from the Monson Motor Lodge contributed to the passage, the very next day, of the Civil Rights Act, following a sixty-day filibuster in the US Senate. Still, this monumental victory by no means ended the struggle: Just three days later, protestors in St. Augustine held a similar wade-in at a “whites only” public beach. They were met by ‘an angry gang of whites [who] used their fists and clubs to assault the interracial group…, sending more than a handful to the hospital.’ None of this was far in the national rear view when Mister Rogers and Officer Clemmons rested their feet in the water for the nation to see” (112).

In big ways and small, over the more than 30 years Misters Rogers’ Neighborhood aired, Fred Rogers sought to emulate “God’s neighborhood, where heaven and earth, the human and the divine, are brought together in the generous love of Christ,” concludes Tuttle (173).

I’m thankful to Tuttle for bringing Misters Rogers from the screen to reality for me through her beautifully written and carefully researched book. Reading about the many ways Mister Rogers quietly and authentically lived out his faith in his daily life is an inspiring example of what we’re each capable of when we act out God’s call to love our neighbors.

“A Beautiful Day in the Neighborhood — Movie Review” by Scott Moncrieff