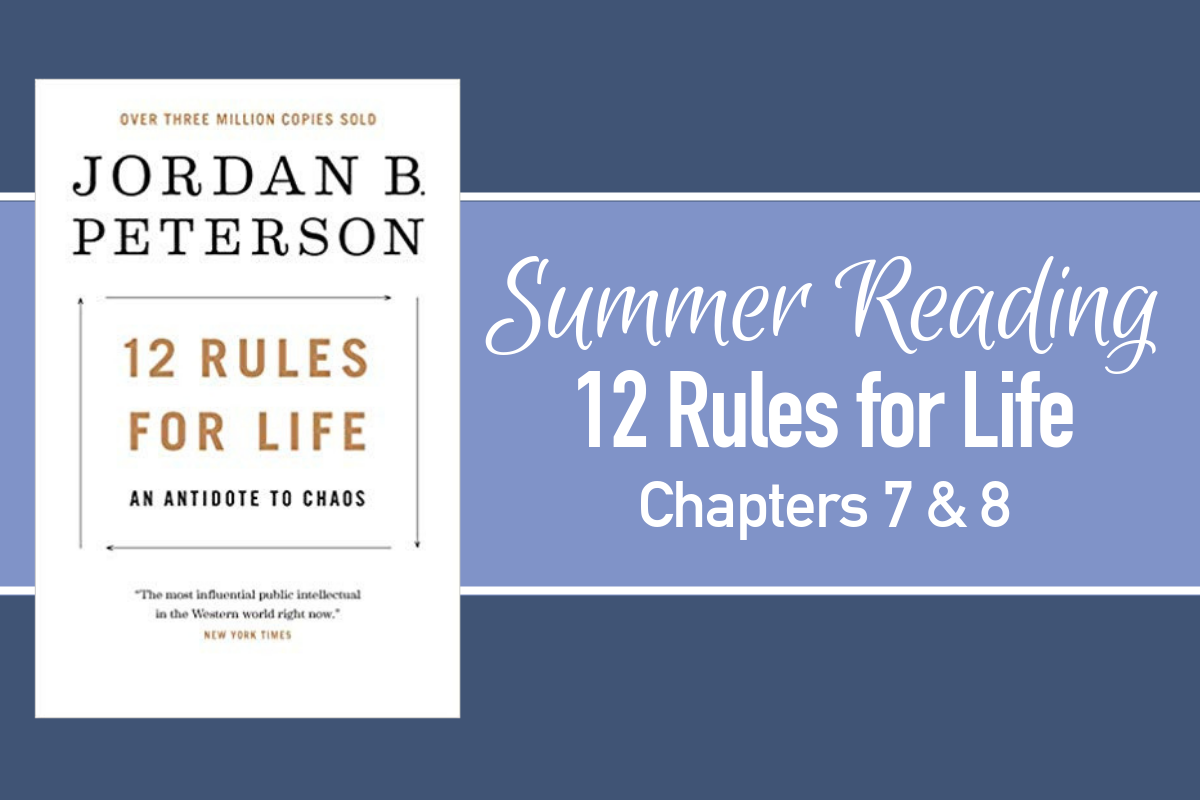 This is the fifth post of Spectrum’s 2019 Summer Reading Group. Each post will be drawn from chapters of the book 12 Rules for Life: An Antidote to Chaos by Jordan Peterson. You can view the reading/posting schedule here.

I love both these maxims/rules: Chapter Seven — Pursue what is meaningful and Chapter Eight — Tell the truth. I chose to engage with these chapters because they embody so much of my own life commandments.

However, in spite of completely agreeing with these sentiments (ideas that are part of so many self-help and how-to guides), I found them hard going. After reflection, I think it was mostly because of the organization of the chapters. I wondered if Peterson lacked a good editor to help him with structure. My overall feeling was that he was trying to cram a bunch of ideas and proverbs and foundational philosophies into chapters they didn’t necessarily fit with. Or if they did, the connection wasn’t clear.

I especially felt this way with Chapter Seven: Pursue what is meaningful. Peterson appears to be trying to root this in an understanding of human nature that is partly founded in history/evolution and partly based on the Christian Creation myth. I don’t think he does well at either of these connections. And I don’t think it was necessary to use these foundations in order to make his (very important) point that when we root our actions in short-term gratification, we often cause suffering to ourselves and others in the long run. Instead, he distracted this historian-reader with his shallow and un-evidenced generalizations about the evolution of human society and the development of human nature and the importance of sacrifice (163-178). In the end, there seemed little connection between the long, meandering musings on sacrifice of the first half and his strong concluding call for looking at the sin in ourselves (198) and making choices to make this broken world better (199).

I could spend some time critiquing his use of history and the problems with how he presents the Christian story (and I am deeply uncomfortable with his use of Nietzsche), but mostly I want to engage with what I enjoyed at the end of this chapter. He moves from the rational, logical Enlightenment-based discussion to a more mystical foundation in his own personal experience. (196-198). Looking at evil outside himself (in the Holocaust, in the Cold War) led him to look at evil inside himself and decide to be humble and act in more unselfish ways. What a useful reaction! (And not one that everyone confronted with the problem of evil comes to.) I thought of my youthful students and realized that I hope that each of them chooses to start with themselves when directing their outrage against injustice or evil.

I can’t help but notice some of the contradictions in Peterson’s litany of maxims in this chapter. The conflicts seem most rooted in his ambiguous relationship to the Christian story. They may also be based in his counseling/therapist background and experiences with people wanting to improve their lives. He argues that we can’t will ourselves to do the right thing because of human nature (193). But then he argues that meaning will emerge when we act properly. I also have found that actions precede emotion (199). That “moving our arms and legs in the direction of our values” as one therapist told a friend of mine, actually does help us be and do what we want in the world. But also, a more robust theology of redemption and what the sacrifice of Jesus meant could allow him to make a better connection between this works-based mantra and his acknowledgement of our own full brokenness.

I think that Peterson’s use and view of Christianity seems to be that of the Enlightenment-era thinkers who believed that Christianity was true because it was the most rational and would lead to a civilized world (197). It is a useful belief system rather than a Revelation that asks for trust and love. As a practicing Christian, I want to go beyond that perspective and make more space for the Truth-claims of Christianity that might also be rooted in faith and obedience rather than pragmatism or the improvement of society. Peterson argues that the Kingdom of God is here in this world when we make it better (184). I also think the Kingdom of God is among us, but if I don’t make strong claims for the New Earth and the “Here but Not Yet” of the Kingdom, I’m setting myself up for an individualist, perfectionistic, making heaven on earth ideal. And this will fail. Because we will keep failing and our best efforts don’t work, and yet we hope for and live into the Earth made New. Ultimately, I think Peterson’s discussion of how Christian reform movements resulted in a rejection of Christianity or the Secular Age would benefit from a reading of sociologist Charles Taylor’s work on this subject.[1]

Chapter Eight, “Tell the Truth (or at least don’t lie),” was shorter and a bit more organized, with the exception of a few pages in the middle where his analysis of role of reason, transcendence and totalitarianism doesn’t seem connected to the primary thesis. His argument that we tell lies in order to manipulate others to get what we want definitely hit home with me (209). I realized that I need to think more clearly about when and why I’m not telling the truth. Perhaps I’m not being honest with myself about what I want, nor feeling safe in telling others that. In many ways, I resonated with his arguments in this chapter because they reminded me of some of Brené Brown’s work,[2] though she’s less dogmatic in her communication of the call to be honest and push through the difficult times and hard news.

So much of Peterson’s work in these chapters reminds me of the Adventist psychiatrist and author Tim Jennings. It’s a focus on Jesus as the example (rather than substitute) and an optimism that right thinking can help with good works and the good life. It tips towards perfectionism. But it’s also wildly popular with people who want someone to give them a list of right things to think about, and suggestions for why and how they can do the right thing in life. There is less focus on grace and the messiness of life. But I think both these men know about the messiness of life. They have had patients who definitely need hard truths spoken and to feel empowered to act in right ways. They change lives in positive ways with their work (though I’m aware of the worries about Peterson’s contribution to a certain kind of problematic masculinity).

I’m more comfortable with Brené Brown’s focus on bravery and vulnerability and acknowledgement of our own fragility. But all three of them are helping humans make sense of the world around them through the social sciences and rooting it in the Christian worldview (though Brown is less explicit in her work), even if it is a particular form of Christian focus that I have concerns with.

This week’s reading reminded me that I should have humility in my opinions and next week’s chapter (“Assume that the person you are listening to might know something you don’t”) reminds me that even those whose assumptions alarm me can still have something to teach me.

[2] Especially her works Braving the Wilderness, Rising Strong and The Gifts of Imperfection.

Lisa Clark Diller is Chair of the History and Political Studies Department at Southern Adventist University.