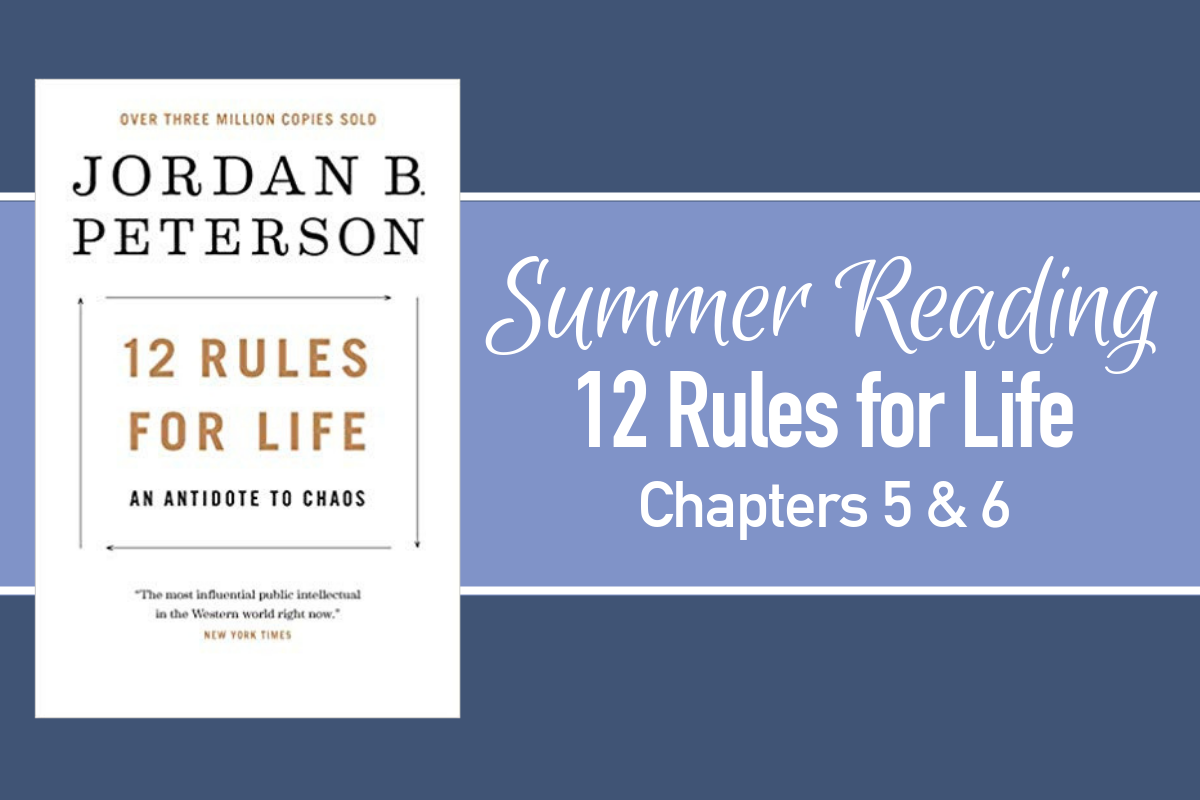 This is the fourth post of Spectrum’s 2019 Summer Reading Group. Each post will be drawn from chapters of the book 12 Rules for Life: An Antidote to Chaos by Jordan Peterson. You can view the reading/posting schedule here.

I learned about Geoffrey Canada and The Baby College listening to an episode of This American Life a few years ago. It made quite an impression on me as a new dad and an important lesson I gleaned from Canada, a “rule for life” if you will, when it comes to parenting my daughter was this: “Read to her regularly.” I was reminded of this maxim reflecting on Peterson’s advice to parents in Chapter Five — “do not let your children do anything that makes you dislike them” — and if I had to select one rule, choosing between Peterson and the one I gleaned from Canada, I’d opt for the latter. Canada’s emphasis and approach addresses many of the legitimate concerns Peterson raises, as well as more fundamental ones he neglects.

Peterson’s emphasis on “parental intervention,” i.e. appropriate discipline, is motivated by a desire to help children grow up and survive, and possibly flourish, in a harsh and hierarchical world. “It is the primary duty of parents to make their children socially desirable,” he claims (143). A child’s social desirability, Peterson argues, is tied directly to their personal well-being. The well-behaved child is a well-liked child. A well-liked child has friends, is loved by his or her parents, given opportunities by other adults, and, thus, ends up liking themselves. They grow up happy and confident. He or she will “thrive, in what can so easily be a cold, unforgiving, and hostile world” (144).

The reverse is also true. “Poorly socialized children have terrible lives,” Peterson warns (135). He casts a dismal forecast for the three-year old who has not learned to share, due to her parents’ refusal to correct her selfish behavior. They pretend everything is okay, but it’s not. Her refusal to share with her sister irritates them, and this irritation expresses itself when they snap at her later for some unrelated matter (much to the child’s confusion). Her uncorrected self-centeredness gets in the way of her making friends. The parents of potential friends, when they witness her misbehavior, hesitate to invite her over for play dates. She grows up lonely and rejected — which turns her into an anxious, depressed, and resentful human being (133).

Thus: “Every child should also be taught to comply gracefully with the expectations of civil society” (134) and parents play a key role in this process through attentive and intentional behavioral conditioning. Drawing on the work of the psychologist B.F. Skinner, who successfully trained pigeons to perform relatively complex tasks through a system of rewards, Peterson points out the ways human behavior can be similarly shaped by associating reward and pleasure with certain actions and pain with other undesirable behaviors. “Pain is more potent than pleasure, and anxiety more than hope” (131).

If Peterson is right, proper behavioral conditioning, via appropriate rewards and punishments, administered by parents in the early years helps children grow up, act right, and get along in a harsh and hierarchical world. They have some of the basic dispositions that are prerequisites for success.

While there certainly are insights to be gleaned from behavioral psychology, it seems to me that Peterson either assumes too much, or needs to address much more basic issues, if he is truly concerned about a child’s sociability, self-confidence, and eventual success in society. Yes, humans share some of the basic drives with other animals, but humans are also uniquely linguistic animals — we understand and use words to express ourselves, communicate desires, and form higher ideals than self-preservation and the satiation of biological drives.[i]

This insight seems central to Geoffrey Canada’s approach of offering training to expectant and new parents. The emphasis is on reading, coupled with positive verbal communication, which is based on the more recent research of psychologists comparing children growing up in high-income and low-income families. The main difference, it turns out, in this much-cited and debated study, was exposure to words. The kids with the professional parents heard 20 million more words in the first three years of their lives than the children from other families. This additional exposure to words impacted actual verbal ability.[ii] The biggest factor, when it comes to determining a child’s success in school, and life, at least in economic terms, it turns out, is the number of words parents speak to them in their earliest years.

So, instructors at The Baby College emphasize the importance of parents reading to their kids. It’s a ritual my wife and I have tried to develop with our daughter; before she goes to bed, one of us will read with and to her. Beyond her linguistic and intellectual development, as important as this is, I’ve come to realize that reading to and with her is important for other reasons.

Beyond their intellectual development, reading regularly to a child, it seems to me, could help them develop morally, too. I don’t doubt that behavioral training helps kids behave in socially acceptable ways. But I can also easily imagine the perfectly behaved child who grows up to act right motivated solely by external and extrinsic factors — a well-adjusted and well-liked “yes” man. What happens when no one is looking, or if she won’t get caught? Would such a child grow up to develop higher ideals, to stand up for others, and even push back against the crowd when it’s headed the wrong way?

In other words, don’t we need to go beyond Skinner’s behaviorism to the work of other psychologists who focus on the moral development of children to get a fuller picture of parenting?[iii] Even if formal moral reasoning develops later in a child’s life, certain essential elements for that eventual development could be provided earlier through reading stories to children. Stories teach empathy, help children envision consequences for actions, and differentiate between right and wrong. In other words, reading stories to kids, beyond simple behavior modification through rewards and punishment, can help them begin developing inner moral lives.

Take, for example, a silly little book my daughter was gifted when she turned two or three — I Want My Hat Back — and has had read to her numerous times. In it, a bear is looking for his lost hat, which has been stolen by a rabbit. The bear asks the other animals it encounters if they have seen his hat, including the rabbit, who is wearing the hat, but denies it. The rabbit is a thief and liar. Eventually, the rabbit is found out. That’s the plot. Through it, kids learn at an early age that there are consequences to stealing and lying.

Reading regularly to kids is important for a more fundamental reason, though, more fundamental than intellectual or moral formation. Children, it turns out, can have all their physical needs met and still fail to thrive in the absence of the love, care, and attention of a caregiver.[iv] Peterson is well-aware of the need of children to be well-fed and rested, sharing stories of how he gets resistant kids, not only to sleep, but also to eat; he overcomes their resistance with a firm persistence. But, there is virtually no emphasis on the importance of showing kids affection, giving them attention, and spending quality time with them. His emphasis on appropriate rules and consequences for breaking them, combined with an under emphasis on the importance of providing a child with a sense of safety and security and forming a stable emotional bond can, thus, be misunderstand and misused.

When my daughter was born, the first thing the doctor did, after cleaning her up, was place her on my wife’s chest. The medical team suggested I regularly do the same, that the skin-to-skin contact was essential in creating attachment between parent and child. I still remember meeting her this way a few hours later — a delicate and tiny ball of life, warm, and breathing in my arms. That connection is strengthened and re-formed on the evenings when she is cuddled up next to me and I’m reading the same book for what seems like the hundredth time, both of us, slowly but surely getting drowsy. This time is about more than the words that are uttered, but a pre-linguistic bond that is reinforced. Both of us, it turns out, are learning about love.

So, read regularly to your kids. It will shape them intellectually, morally, and emotionally. That’s the maxim I’d choose, if I could select only one. (Perhaps, if Peterson had written an entire book on parenting, rather than one or two chapters, a more expansive view, based on a more expansive view of human nature, would have been developed and presented.[v]) Humans are linguistic animals, ones that will grow up to love or hate, so read to them often, especially when they are young.

Zane Yi is an associate professor in the School of Religion at Loma Linda University where he teaches courses in philosophy and theology and directs the MA in Religion and Society program. He currently serves as an officer for the Society of Adventist Philosophers.