Review: Blood, Guts & Fire: The Gospel According to Leviticus

Review: Blood, Guts & Fire: The Gospel According to Leviticus 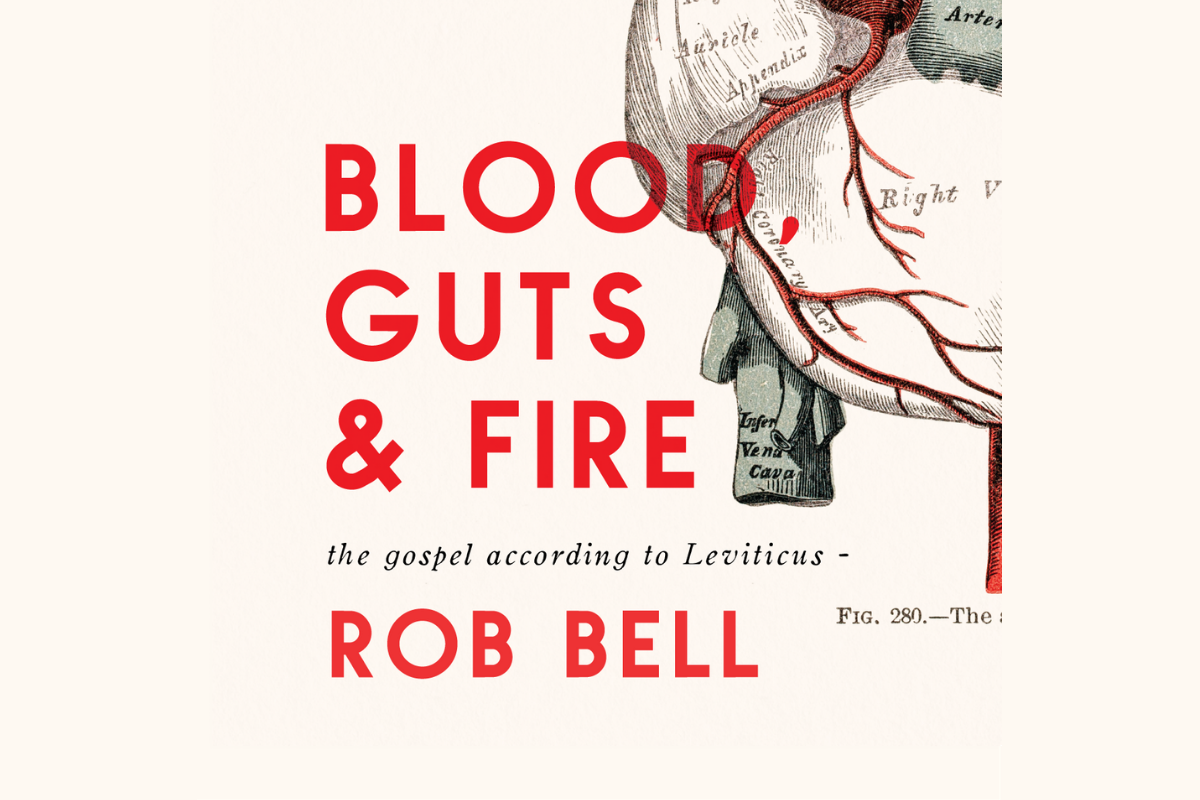 Ancient, weird, violent, brilliant, surprising, mysterious. These adjectives describe Leviticus in Bell’s recent commentary, Blood, Guts, and Fire: The Gospel According to Leviticus, which is only available in audio format. Bell has released two parts in the series, and divides the content into Chapters 1-7 and Chapters 8-10. I found joy and grace when I explored Leviticus under Bell’s tutelage.

His approach is one that looks at scripture from 30,000 feet, in a larger context. He sees truth in Leviticus as being like nesting Russian Dolls. That means one can see the truth about God as multi-faceted and detailed. Bell proposes that one must understand culture to understand this third book in the Bible that is often mocked and carved up by people who want to prove the Bible to be irrelevant. For Bell, Leviticus is relevant, and, in fact, shows that the gospel was subversive from the beginning. Leviticus shows God’s big-hearted reach to all people. On the heels of the Exodus, Leviticus comes to a people whose culture was transformed after 400 years of enslavement. People in Mosaic time would not understand the stories we tell now about traffic and how that phenomenon overlays daily quality of life. Cars? Highways? Accidents? Engine trouble? Similarly, understanding these older stories will require us to consider the context.

Bell suggests reading Leviticus for spirit, not form. Yet, there was a reason for the comprehensive list of directions. The idea that God conveyed in Leviticus was this: The world may be a mess, but here, with this, we are not a mess. God instructs about many details, and details elevate the every day. Rituals unite. Sing together. Breathe together.

Levitical rituals are not about leaving the world, but about coming together in the world to encounter the Divine. What an idea for people who had been used ruthlessly by Egyptians. This path to God would involve adherence to details and rites that may appear insignificant, at first glance, but would serve a purpose. In Leviticus, the priest would lead people in ways that showed respect for God and soothe anxiety. In these words, people hear a promise that they can be part of a new world, a new culture. Leviticus describes form that is meaningful to use to bring about the change. There seems to be a timeless hunger to enter a new stage.

Bell poses the question, “Why do we love to binge watch makeover shows?” There is a yearning for a better way of life. There is an endless variation to the eternal craving for a new start. In the genre of makeover shows, one can learn that details of life matter. Leviticus functions as key to the makeover of liberated slaves. Leviticus offers an antidote to anxiety. It is as if God said, “You can know where you stand, and here is how not to have anxiety.”

Leviticus offered details about the plans for a tabernacle in which God would dwell, providing validation and reassurance to the newly freed people. God wanted to be among them. They would participate in a process that would allow the Divine to dwell among them and flow through them. Their identity would now consist of more than being mere production units. We, also, can be more than the total of our component identity pieces. We can be a part of the Divine task here on Earth. When the world seems unordered, collapsed, and spiraling out of control, we must, like the Israelites, attend to detail and mind boundaries. Sabbath rest is a part of this. It allows time to recharge and remake an identity that is free from barnacles of consumerism, empire, and power. God dwelling among the Children of Israel — in tabernacle and through priests — is all about validation of a new identity.

Bell says the descriptions of various offerings in Leviticus functioned to address a deep narrative for that time which said, “Someone, somewhere, must be appeased.” The definitive instructions of what to give offered a boundary so that the Israelites knew specifically what would be required to remediate certain problems. This was a culture where people thought gods had insatiable hunger and that it might be necessary, at times, to give the ultimate, a child, to appease the gods. The sacrificial gifts in Leviticus were specific and finite.

In the 21st century view, one can feel repulsed to read about bloody animals for sacrifice. Lest one disparage those times unfairly, Bell suggests one might consider several facets to the issue. The animals offered were creatures with which the people had a relationship. To offer an animal without defect implied that the people had a level of care and concern and connection with the creatures. This is different from the way we kill creatures today. In an extraordinary development in historical context, the way society breeds animals for consumption now is actually more barbaric. Animals are raised as commodities, thoughtlessly and greedily, and with no respect for their lineage as a part of creation. Perhaps, society now is actually more bloody and barbaric than the Mosaic era.

This God, Yah-weh, as described in Leviticus was a good God, not a competing God. Yah-weh’s admonitions were measured and thoughtful and could lead the Israelites to undergo a new ordering in their society. The words of instruction in Leviticus were not a trial to be endured, but a gift to be received. The Hebrew people would be launched on a path that featured gratitude and minimized resentment. In the Mosaic context, people would think that gods were incessantly hungry and demanded more and more. The God described in Leviticus was not like that.

Bell frames the failure of Aaron’s sons in Chapter 10 as a case study in hope. Nadab and Abihu, close to power, were not able to handle it well, and, instead, abused it. After this, God just continued to work with the leaders available. God, speaking through Moses, directed the sons of Aaron’s uncle to act. God kept giving instruction, and was not thwarted by the actions of Aaron’s sons. Nadab and Abihu did not follow God’s way, as it would later be described in 1 Peter 2. There is always a special responsibility for the chosen people. But, if the chosen do not stay in God’s path, He continues with His purposes. Thus, Leviticus shows the pattern of failure and restoration that is evident in all 66 books of scripture. In God’s Kingdom, human failure does not have the last word.