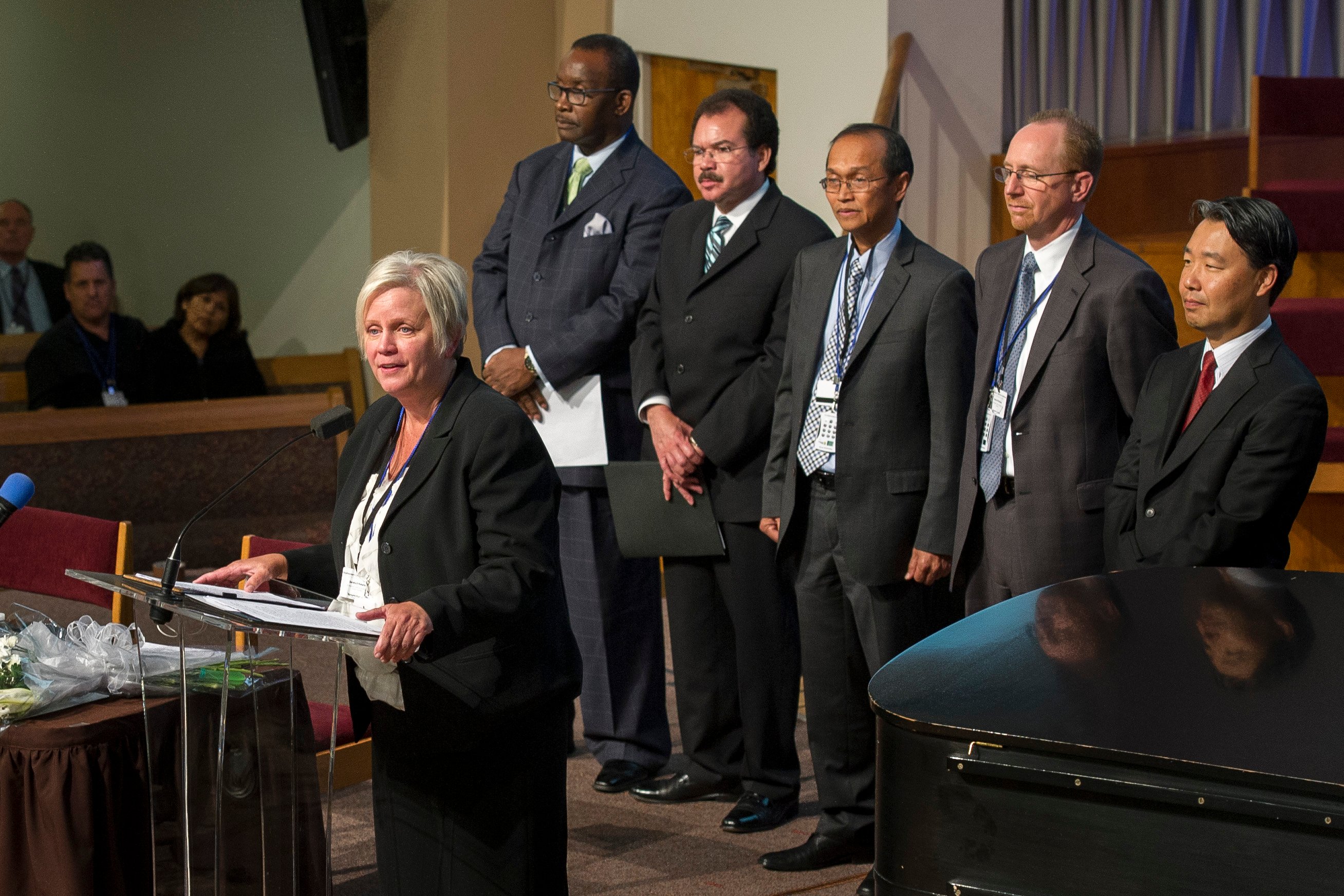 To loud applause Sunday afternoon, Dr. Sandra Roberts was confirmed as Southeastern California Conference’s next president, making her the first Adventist woman to be elected as a conference president. The history-making vote (567 “yes” to 219 “no” or 72% to 28%) overwhelmingly affirmed the conference nominating committee’s recommendation despite a cautionary message from General Conference president Ted N. C. Wilson.

The vote came during the conference’s first quinquennial session. In Southeastern’s 2008 constituency session at the height of the national economic crisis, delegates voted to meet every five years instead of every four.

Worship preceded the day’s business. Dr. John Brunt, senior pastor of the Azure Hills Church, delivered the morning devotional in keeping with the day’s theme, “Follow Me.”
Brunt’s message focused on four outgrowths of Peter’s seemingly impulsive decision to follow Jesus as recorded in Mark’s Gospel: success, surprises, suffering and salvation. Recounting Peter’s rooftop vision in Joppa, Brunt noted that Peter was surprised by the inclusivity to which Peter was called. Calling on delegates to look past divisions, Brunt noted the ethnic diversity of the constituents, but said “that doesn’t matter here today” because God surprised Peter with the realization that God doesn’t play favorites. Brunt made the same point concerning gender: God doesn’t play favorites.

Delegates were briefed concerning their electronic voting devices and took a practice vote with interesting results. Practice voting revealed that 66.8% of seated delegates (including at-large delegates, mostly pastors) were male, and only 33.2% female. Of voting delegates, 79% were 41 years old or older, and 51.6% favored the Boston Red Sox over the St. Louis Cardinals in the World Series.

The first major agenda item was the seating of nine new churches and five new companies that joined the conference since the last constituency meeting. Notably, with only a couple of exceptions, the new congregations were either Hispanic or Indonesian. The clear takeaway was that growth in the conference mirrors church growth denomination wide: it is strongest among distinct ethnic communities.

Next came reports from various offices within the conference headquarters. Of the reports, one stood out for its blend of upbeat news and somber stories. The education department headed by superintendent Donald Dudley reported that enrollment numbers conference-wide were steady until the 2008-2009 school year. The economic downturn hit Adventist schools hard, causing a precipitous drop in student enrollment that led to the closure of five small schools, characterized as schools with less than 100 students and a teaching principal. Things began looking up in 2012-2013, but enrollment in K-8 has dipped again in the current school year, Dudley said. He noted that schools have seen large graduating classes that are not necessarily being replaced with younger students.

Graham prefaced the discussion and votes on nominees with news that he had received personal communication from General Conference president Ted Wilson. Graham delivered the cautionary message from Elder Wilson, warning that if a woman were elected president, it would put the conference and the union in direct conflict with the General Conference, and a woman president would not be seated or given a vote at the upcoming Year End Meetings in Silver Spring. At this news, a loud murmur rippled through the gathering.

Graham hastened to add that the nominating committee had followed conference and union by-laws “to a T” (bringing strong applause) and that any potential conflict would only be between the union and the General Conference. He conveyed that voting for a woman as president would not be a problem from a conference or union policy standpoint and referenced union action concerning the North American Division’s E-60 policy.

Following Graham’s remarks, Dr. Guy moved the first recommendation of the nominating committee: Dr. Sandra Roberts as conference president. Delegates almost immediately began flocking to microphones to speak to the motion. The first commenter, a pastor, stated that some delegates did not hear Elder Wilson’s message, and asked Graham to repeat it, which Graham obligingly did.

Next, a slew of delegates spoke both for and against Roberts. Those in opposition to the nomination cited church unity and the need to defer to the world church on matters of ordination of women. Graham pointed out that as for General Conference policy requiring that a conference president be an ordained minister, Roberts already was (In March of 2012, SECC voted to ordain pastors without regard to gender).

Among those in favor of Roberts’ nomination, several prominent leaders spoke. Among them, Loma Linda University Church senior pastor Randy Roberts (no relation to Sandra) took the microphone, first stating that he felt it was very unfortunate that Elder Wilson chose not to deliver his message in person, electing instead to compel Graham to do it while simultaneously chairing the vote on Sandy Roberts’ nomination. Continuing, Randy Roberts stated that unity demands equality, and noted that it is those leaders in power who call for unity, and never those excluded from power. When he finished speaking, delegates applauded loudly.

La Sierra University Church senior pastor Chris Oberg spoke, noting that during the administration of former GC president Neal C. Wilson, Southeastern California Conference was at odds with the General Conference when it moved to pay men and women equally.

Following a vigorous discussion, and with numerous delegates still lined up to speak, Frieda Roos, a member of the conference executive committee called Roberts “the most qualified person to be president at this moment,” and called the previous question. Over 80% of delegates voted to end discussion and vote on Roberts’ nomination. Graham opened voting.

When the results were finally disclosed, 72% of delegates had voted to make Sandy Roberts the first woman to serve as a conference president in the Adventist denomination. Delegates responded with loud, sustained applause. Almost instantaneously, social media sites lit up with photos, status updates and tweets announcing the news and sending it viral.

Roberts’ rise to the presidency comes on the heels of her nine years as executive secretary. Prior to that, she served in the conference’s youth department for five years. She is a former pastor, chaplain, teacher and general manager at Pine Springs Ranch camp and conference center. Roberts succeeds Elder Gerald Penick, who served as president for nine years, and who will return to pastoral ministry to finish out his career of denominational service.
The rest of the conference officers were elected by large margins without discussion.

One of the most poignant agenda items came late in the meeting when Pastor Carmen Ibañez reported on Pine Springs Ranch, which was recently affected by a large wildfire that roared through the surrounding mountain communities. She shared a slideshow depicting some of the fire’s devastation, including damage to several camp facilities. After that, treasurer Verlon Strauss discussed money that has been set aside for Pine Springs Ranch since before the 2008 economic downturn. Delegates authorized the expenditure of insurance money and $1 million from the PSR endowment to begin rebuilding and restoring the camp.

Conference officers came to the stage to thank Gerald Penick for his years of service with his wife and family flanking him. Penick, in his final remarks before the meeting’s end, commended his successor saying, “We needed to break that glass ceiling. We needed to make things right.” He affirmed delegates’ choice, calling it an indication that they saw things as God saw them.

In closing, President Roberts told delegates that her vision is not for top-down leadership, but for an ongoing process of visioning together.

See also this report of the meeting from the Southeastern California Conference.