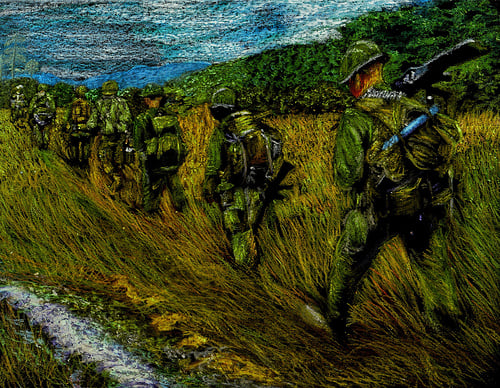 Recruited to serve, individuals who enlist as Christ’s disciples in His Remnant Church quickly discover they are engaged in a great, cosmic conflict that began long before recorded history. Christians are soldiers. To be victorious a Christian requires moral ascendancy (a faith-based foundation), the right armor and training in the use of spiritual weapons. The Scriptures abound in references to warfare and the military (Ephesians 6:10-18). Chained to a soldier for two years, Paul understood and often alluded to aspects of the military. The book of Joshua was written by a general. Even the Lord returns as the Commander-in-Chief of the conquering heavenly armies to rule with a rod of iron over His defeated enemies (Revelation 19:11-21).

The New Testament makes no derogatory statements towards soldiering. Jesus commends the Centurion’s faith (Matthew 8:4-13) and forgives even those who simply did their duty; however, unpleasant (Luke 23:32-34). In fact, the first Gentile convert to Christianity was a pagan, Roman Army officer (Acts 10). In their dealings with soldiers, neither John the Baptist nor Jesus ever told soldiers, “Get out” to be saved, or “Don’t join.” Rather, they admonished them to serve more faithfully (Luke 3:14).

Adventism organized as a denomination during the “Uncivil War between the States.” As a prophetic Church, Adventists know the last days will bring “wars and rumors of wars” and “nation rising against nation” (Matthew 24:6 and 7). There will be no peace. These conflicts will culminate ultimately in the battle at Armageddon1 (Revelation 16:1-16). The Adventist psychic rests in part on the concept of warfare; i.e., the Great Controversy between Christ and Satan (good and evil).

Aside from their understanding about the “Theater of the Universe,” Adventists keenly engage in other battles against social evils and political wrongs. Our history is replete with aggressive and defensive postures over issues such as abolition of slavery, temperance, domestic violence (“End It Now”), human trafficking and Sunday laws. Adventist applied theology advocates living by positive principles and spiritual values, which are conservative by today’s social standards.

So should an Adventist young adult voluntarily enlist in military service? Many do for a variety of valid reasons: patriotism, belonging, challenge, education and training, job, pay and benefits, travel and adventure, independence. The vast majority of Adventists in uniform train to use weapons as combatants. This should not come as a surprise. In most nations there are no alternatives. The thinking of the 1960s and Vietnam anti-war protestors influenced the Church sufficiently to end Medical Cadet Corps in 1972. With the end of conscription in 1973, the National Service Organization structure quickly evaporated. For over three decades the ethics of combat and/or the issues around military service have been benignly neglected in denominational school curriculum and journals. The concept of noncombatancy became like the traditional standards Adventists have been taught and practiced for decades, but now are largely ignored (appearance, diet and leisure activities). Furthermore, as a Church we dress our juniors and earliteens in Pathfinder uniforms with lots of awards and badges, send them off to barracks (dormitories) with First Sergeants (deans), and teach them to obey the rules at secondary boarding academies. No wonder many Adventist youth voluntarily enlist in the military services!

The official position2 of the denomination concerning military service was last adopted in 1972 at Mexico City. The position recommends serving in roles that will save life rather than take lives, preferably as a noncombatant. However, the Church respects individual choice in this matter; like the recommended health and lifestyle of a vegetarian diet, noncombatancy is not a test of fellowship or membership. The Church provides pastoral care and spiritual support to those who conscientiously believe they must defend and protect others, as well as for those who believe force should never be used and thus cannot serve in the armed forces. These issues are deeply personal and merit much thought.

Four groups of Adventists are found in military uniform. In some countries they are conscripted; in others, they voluntarily enlist. Third, there are converts. Members of the military voluntarily join the Seventh-day Adventist Church. Fourth, attorneys, chaplains, medical doctors and nurses practice their professions in uniform.

For those who serve, many encounter four conflicts between religious faith beliefs and practices and military training and mission requirements: (1) From the first week of duty until discharge – observance of the Bible Sabbath. (2) The possibility of taking human life. Those who have studied the ethics of just war, international law on warfare, combat psychiatry and read books like LTC Dave Grossman’s On Killing, know the seriousness of the issue. Even when done to save life, taking life scars. Given a choice, some enlistees would prefer to be noncombatants, which by the way requires great courage to tread on the field of battle unarmed for the purpose of caring for the wounded and getting them safely evacuated. (3) Diet and health. Military life is dangerous. The training is rigorous, the equipment is heavy. Deploying to foreign countries with different climates, diseases, etc. takes a toll on the body. (4) Negative worldly lifestyle and influence. Perhaps, this area presents the greatest problem. Too often church members live their faith inconsistently and when pressed to choose between priorities, compromise their faith. Once that occurs, self-guilt and outside expectations makes it difficult to return to faith practices.

Can an Adventist serve in the military and remain an Adventist? It is possible. The Armed Forces of many nations make provision for accommodation of religious practices with certain caveats. An old proverb states, “We see what is behind our own eyes.” In other words, we find what we are seeking, or “Seek, and you shall find” (Matthew 7:7). A person can have a positive experience and benefit greatly from military service, or they can become casual, then careless in their spiritual life while in uniform. But then the same could be said for a student on an Adventist campus. After thirty-six years in uniform I have observed that Adventists who live by their faith values are valued by commanders. They are not abusing their families, drunk, shirking duties or trying to do the least they can just to get by. As self-disciplined and loyal members, they often volunteer for chapel and community activities. They are effective witnesses inside circles usually closed to the church. Their influence helps earn the denomination credibility and respect from fellow Christians and the government as “conscientious cooperators” rather than “objectors.”

As an international Church with members in over two hundred countries, Adventism wrestles with issues of unity, doctrinal cohesiveness, as well as cultural and political diversity. The denomination sometimes experiences the reality that cultural and political agendas infiltrate the Church more than supposed, rather than faith-based religion influencing culture and politics. I believe faith must be all encompassing, the very essence and fiber of life. It must be based on trust in a living and loving Sovereign God who has our best interest at heart, and should not be determined by circumstances (bad or good), convenience or comfort. Living a faith-based life is “walking point,” living on the cutting edge. Thousands of young adult Adventists around the world have demonstrated the “Adventist Advantage” can be applied and practiced in any situation, including the military. If Adventism cannot be practiced in the military, then our faith has limitations which are greater than its Author. That view would also demean the honorable service and sacrifice of thousands of Adventist veterans who loyally adhered to their faith while honorably serving, often with distinction (such as Keith Argraves, Desmond T. Doss and countless others). Those veterans would be wrongfully viewed as “second class members” for having made personal sacrifices to perform public service. That judgmental attitude is the more grievous error!

Sometimes, accommodation of religious practices or respect for our beliefs is not granted by the military, resulting in discriminatory persecution and the loss of beneficial service from the service member. Government has the obligation to insure the human rights of all citizens are protected. Number eight of the sixteen "International Declaration of Human Rights" grants "freedom of thought, conscience and religion or not to believe." Wise leaders find ways to accommodate legitimate religious practice of honest and law-abiding citizens. Respecting subordinates and accommodating their religious faith practices earn leaders respect and loyalty in return. It does not open a Pandora’s Box of endless demands.

During the Korean and Vietnam conflicts, the U.S. Army applied some learned lessons from personnel problems over religion during World War II. Conscientious objectors (noncombatants) were sent to special training units at the medical schools on Fort Sam Houston, and the units trained from Sunday to Friday. Adventists were granted Saturdays off to observe the Bible Sabbath. This kind of “win-win” thinking mutually benefitted everyone.

As mentioned earlier, Adventists teach adherence to spiritual law. God is the Author of all law, including physical and civil / social laws. In the earthly realm, the Almighty establishes order through government and its civil leaders. St. Paul declares government officials to be God’s ministers (Romans 13:1-7). Except where there is obvious conflict (Acts 5:29) Christians are commanded to give responsible, ethical service in the earthly realm, like rendered by Joseph, Daniel and Esther. Within the First Century, Christianity extended throughout the civilized world. Paul commends the presence of “saints in Caesar’s household” (Philippians 4:22, KJV). Whether they were converted slaves or government officials is not known, but I like to believe they were Roman soldiers in the Praetorian Guard! God loves them, too.

1. Armageddon means “the mountain of Megiddo.” Most scholars believe this battle is the final spiritual conflict, but that does not exclude an actual physical battle.--2 The denominational position advocates noncombatancy, but does not make it a test of fellowship. The Church respects individual conscience in this matter and does not pass judgment on choices.

2. The denominational position advocates noncombatancy, but does not make it a test of fellowship. The Church respects individual conscience in this matter and does not pass judgment on choices.

Gary R. Councell is the Director / Military Endorser for Adventist Chaplaincy Ministries. During more than four years in the U.S. Army Reserve and 32 years of active duty as a U.S. Army Chaplain, he maintained active pastoral involvement in the Church, completed a year of Clinical Pastoral Education (parish model) and earned an additional master's degree in counseling.

Image: "Heading Home," US Patrol heading back to base, Vietnam War. From Flickr user traqair57.