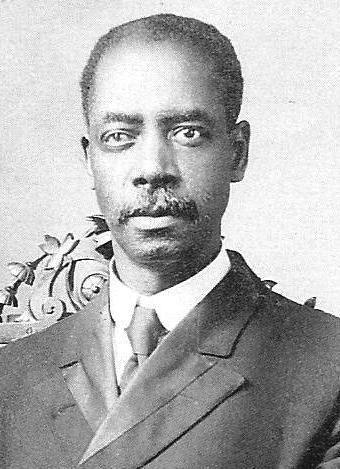 Just six months before, hardly anyone in the nation’s capital would have recognized his name.  Now, on January 1, 1903, the preacher stood among the “Prominent Speakers of the Race” chosen to address Washington, D.C.’s celebration of the fortieth anniversary of the Emancipation Proclamation, according to the Washington Times. The Washington Post identified him simply as “the well-known evangelist.” The Washington Bee went so far as to characterize him as “the most learned minister in the United States among the negroes.”[i]

The accolades for Lewis C. Sheafe [pictured] in the Washington, D.C. press resulted from a spectacularly successful evangelistic series conducted in the summer of 1902. The “noted apostle of Seventh Day Adventism,” as yet another newspaper referred to him, had stirred Washington with his “persuasive eloquence and convincing logic.” After the series concluded, the evangelist remained as pastor of the city’s First Seventh-day Adventist church. Later in 1903 he launched a new congregation, the People’s Church, forerunner of today’s DuPont Park Church.[ii]

In the century plus between the 1903 celebration and the 150th anniversary on January 1, 2013, public perceptions of the Emancipation Proclamation and the president who signed it have varied considerably. For decades the prevailing image was of Lincoln as the Great Emancipator whose proclamation prompted grateful hallelujahs from the newly-freed on plantations throughout the South prevailed.

Then, in the latter decades of the twentieth century, that idealized picture came under attack. New thinking castigated Lincoln as the great hypocrite – a cynical politician and self-serving racist who did nothing for African Americans other than that which circumstances beyond his control compelled him grudgingly to do. In the words of Lerone Bennett, the strongest advocate of this view, Lincoln was “forced into glory.”[iii] More recently still, however, a more positive assessment may be gaining momentum, exemplified by the high acclaim for Steven Spielberg’s 2012 film, Lincoln.

These shifting currents of thought make the question of what the Adventist preacher had to say on the subject in 1903 all the more intriguing. Though only a two-sentence summary of Sheafe’s remarks has been preserved, it is enough to indicate sharp historical insight.

But first, what did President Lincoln himself say about the purposes and impact of the action for which he is best known in history? He laid out his perspective in a letter of April 4, 1864, to Albert C. Hodges.[iv]

The evil of slavery had always been evident to Lincoln. “If slavery is not wrong, nothing is wrong,” he wrote Hodges.  Yet the president drew a distinction between personal conviction and public duty. He knew the difference between the Bible and the Constitution, and it was the latter, including the protections it then contained for slavery within its present bounds, that he had sworn to “preserve, protect, and defend.”

Thus, for more than a year into the Civil War, Lincoln purposely and explicitly excluded abolition of slavery as a purpose of the war to put down the Confederate rebellion. Four slave-holding states in the upper South – Missouri, Kentucky, Maryland and Delaware – remained loyal to the Union. To jeopardize their support with an abolition policy posed too great a threat, in the president’s calculation, to his supreme goal of preserving the Union.

However, a succession of bloody failures to crush the rebellion caused him to re-calculate in the summer of 1862. Hard military realism, not moral idealism, drove his thinking. An “indispensable necessity for military emancipation and arming of the blacks” became apparent to him, he explained to Hodges. Though the Emancipation Proclamation did not apply to slaves in the loyal border states or in certain areas of the South already under federal control, it meant that wherever Union forces advanced, the proclamation declaring the enslaved to be “forever free” would become living reality.

Not only that, the freedmen would be encouraged to join the Union army, and they did so by the thousands. Lincoln pointed out with satisfaction in his April 1864 retrospective that his emancipation measure had resulted in 130,000 black soldiers and military personnel in the Union forces, while the Confederacy had been deprived of the economic support the same had provided. Eventually the number swelled to around 200,000, and Lincoln later unequivocally declared that the Union could not have won the war without them.[v]

“I claim not to have controlled events, but confess plainly that events have controlled me,” he acknowledged to Hodges. Here, his later critics have a point.  Lincoln’s own volition was not the driving, controlling force in emancipation. Yet once the opportunity came to more closely align national purposes with God’s by attacking slavery, Lincoln seized it and pursued it with relentless determination. At times military and political setbacks rendered the success of his new policy uncertain, but he persisted, having made a “promise to myself, and …to my Maker.” After gaining re-election in 1864, he threw his political capital into passage of the Thirteenth Amendment to the Constitution, which made slavery illegal throughout the United States.[vi]

The incisiveness with which Sheafe, forty years later, cut through the fog of overblown adulation while giving Lincoln due recognition, can now be better appreciated. The Washington Evening Star encapsulated his remarks: “Rev. Lewis C. Sheafe traced ‘God’s guiding hand’ in the conditions immediately antecedent to the civil war, and during its progress, when even a disposition to interfere with slavery was not in the plans and purposes of President Lincoln. Military necessity caused him, the speaker said, to fall in with the master purposes of the Almighty.”[vii]

Lincoln himself said as much in the letter to Hodges, with words that became part of the surpassing eloquence of his Second Inaugural address a year later: “If God now wills the removal of a great wrong, and wills also that we of the North as well as you of the South, shall pay fairly for our complicity in that wrong, impartial history will find therein new cause to attest and revere the justice and goodness of God.”

Judgment against slavery brought with it the opportunity for a “new birth of freedom” in which the former slaves would a have a full and equal share. After some hopeful developments in the Reconstruction period following the war, however, the nation retreated from the promise of equality. By the 1890s a “capitulation to racism,” a descent into the historical nadir of American race relations, was in full sway.[viii]

It was at this very time that Ellen G. White’s prophetic gift stirred the Adventist church finally to take meaningful strides towards reaching the nation’s African Americans, most of whom still resided in the quasi-freedom or quasi-slavery of the segregated South. And the church’s mandate was to reach them with a gospel that touched the needs the whole person – for education, health, and economic opportunity, in connection with new life in Christ.[ix]

The liberating potential of that program drew Lewis Sheafe to Adventism. Just months after stirring controversy with a fiery denunciation of the national government for betraying the promise of emancipation, health problems led the eloquent Baptist preacher to seek treatment at Battle Creek Sanitarium. In the message of “present truth,” he found something more – both the hope for the future and the help for the here and now that his people so desperately needed.

At the 1899 General Conference he testified: “I believe that Seventh-day Adventists have a truth which, if they will let it get a hold of them, can do more in this field [the South] to demonstrate the principles of the gospel of Jesus Christ than can any other people. The one thing needful, is that the truth shall get hold of the individuals who profess to know it.”[x]

Assigned by the General Conference to Washington for a major evangelistic initiative in 1902, Sheafe built on a strong foundation established by Adventism’s first congregation in the city, organized thirteen years before. The interracial congregation of around 150 had already begun to attract attention for its remarkable testimony to the power of the gospel to overcome racial alienation at the very time when the nation and its churches were drawing the color line more rigidly than ever before. Though, like Sheafe, all but forgotten a century later, their story adds to the impression that God was calling the Adventist movement to be the head, not the tail, in healing race relations, just when the need was greatest.

All too quickly, though, the church ended up conforming to the world’s pattern, and racial inequities became entrenched over a period of decades. Then, when the world changed in the 1950s and 1960s, the church once positioned to take the lead in applying the gospel to American’s greatest social dilemma, now had to be dragged along by governmental pressure toward ending discrimination in its own institutions.[xi]

The laws and constitutional amendments that declared equal citizenship during Reconstruction, though rendered ineffectual in the era of “Jim Crow” segregation, turned out, after all, to be more than mere legal verbiage.  Nearly a century later they became the springboard for the legislative breakthroughs of the “Second Reconstruction” that made basic civil rights a reality at last.

Just as the nation drew on long dormant precedents to bring about that achievement, the Adventist movement could recover from its own heritage an impelling vision of freedom that both embraces and the best of what America has to offer. The evangelist who spoke to the nation’s capital on January 1, 1903, about God’s hand in the work of emancipation is but one of many whose long-obscured witness can help us find our way toward falling in with God’s master purpose for His church.

That purpose as Ellen White describes it in the first chapter of her Acts of the Apostles, is to make manifest to the principalities and powers “the final and full display of the love of God.”[xii]  And that display gains focus when a fellowship drawn from “every nation and kindred and tongue and people” unites in genuine justice and healing harmony through worship of the Creator God who confers on each member of the human family the equal dignity of His own image (Rev. 14:6-7).

That’s the emancipation the whole world is longing for—the freedom from hatred, violence and oppression that is the “glorious liberty of the children of God” (Romans 8: 21).

More on Lewis Sheafe, the origins of Adventism in Washington, D.C., and race relations in the church around the turn of the twentieth century, in Douglas Morgan, Lewis C. Sheafe: Apostle to Black America(2010), part of the Review and Herald Publishing Association’s Adventist Pioneer Biography series, edited by George R. Knight.