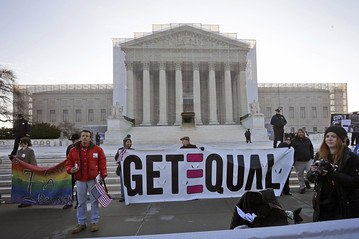 A few months ago, Michael Peabody, Juan Perla, Alexander Carpenter, and I discussed the pending oral arguments on the cases of Hollingsworth v. Perry and U.S. v. Windsor. The Supreme Court rendered 5-4 decisions in both cases yesterday and the two decisions in total are a fairly substantial victory for those who support the rights of gays to civilly marry in this country.[1] Certainly there are those who think the decisions went too far, and others who think the decisions did not go far enough. However, in both cases, I find the Court’s rationales to be fairly sound, from a legal perspective.

Hollingsworth v. Perry, which involves Proposition 8 in California is the more legally technical case to address. In this case the Court declined to even address the merits of the case, finding that the parties that brought the appeal did not have standing to present their claim. In most situations, the state would be the proper party to argue in defense of this proposition, but they declined to do so, allowing the private groups that supported and proposed the proposition to defend it if they chose.[2] The Court essentially ruled that these private parties did not have the standing to present this case because they could not show a “judicially cognizable interest of their own.” While I believe this is the proper legal decision, it is also useful for the Supreme Court because it allows them to dispose of the case without addressing the question at the heart of the judicial controversy – the constitutionality of restrictions on civil marriage targeted towards gay people. In response to this opinion there was the expected hue and cry about the downfall of American society, the disrespect to the will of the people, and the destruction of the human family, but I think it is important to remember the procedural posture of the case at its inception. At the time Proposition 8 was proposed, California courts had ruled that gay marriage was constitutional and permissible. Proposition 8 was then proposed as a way to strip these rights away from a subsection of the citizenry. The reason why Prop 8 was invalidated was not because the court had a desire to circumvent the will of the people, but because the will of people cannot be used as a weapon to deprive other people of rights that the state has granted. By remanding the case to the Ninth Circuit and then ordering them to dismiss the case (the Supreme Court ruled that the parties did not have standing in the  Ninth Circuit Court of Appeals either), the original ruling invalidating Prop 8 is now the rule on record. While there is some question as to the scope of that ruling, most scholars believe that gay marriage is and will be alive and well in California.

US v. Windsor, while more substantive, is also more straightforward. The Supreme Court’s decision yesterday invalidates Section 3 of the Defense of Marriage Act (DOMA) which defined marriage as between one man and one woman for the purposes of receiving benefits from the federal government. Citing the concept of equal liberty in the 5th Amendment, Justice Kennedy (writing for the Court), struck the provision because it created an unacceptable two tier system of marriage. He writes,

DOMA undermines both the public and private significance of state sanctioned same-sex marriages; for it tells those couples and all the world, that their otherwise valid marriages are unworthy of federal recognition. This places same-sex couples in an unstable position of being in a second-tier marriage. The differentiation demeans the couple, whose moral and sexual choices the Constitution protects, and whose relationship the State has sought to dignify. And it humiliates tens of thousands of children now being raised by same-sex couples.

I do not think it can be reasonably argued that the government denial of benefits for a legally constituted marriage does not create the impression (if not the actuality) that gay marriages are somehow different and less than heterosexual marriages. Furthermore, Justice Kennedy found that the rationale of DOMA at the time of its enactment (at least in regard to Section 3) was to “express[] both moral disapproval of homosexuality and a moral conviction that heterosexuality better comports with traditional (especially Judeo-Christian) morality”[3] This is important because Justice Kennedy fully expressed the Court’s displeasure with using religious morality as an undergirding principle for the legislation we pass. This statement will not only be to the benefit of those who have no faith, but people of every faith as well.

Despite the predictable conservative Christian criticism of these two decisions, it does not seem that many people are addressing the most elementary of questions. What exactly changed for churches in this country with these decisions today? Neither Hollingsworth nor Windsor demand that any church, even in states that allow gay marriage, be forced to conduct gay weddings. Moreover, these decisions do not affect the ability of churches to decry homosexuality or homosexual conduct as immoral.[4] It might be possible that these decisions could one day lead to the reality that para-church organizations could lose government funding if they disparage gay people. However, I would consider such concerns to be wildly speculative, and not germane to the existence of a church. After all, churches do not necessarily have a right to receive government funds. So while there has been a lot of noise from the religious sector, it is important that we distill these decisions for what they are. Hollingsworth allows gay people to get married in California. Windsor allows gay couples in states that have gay marriage to receive benefits from the federal government. These are huge victories for the LGBT community but really have no effect on those of us who already take these rights for granted. To insinuate anything beyond that is but so much sound and fury.

[2] While rare, this is not the first time a jurisdiction has decided not to defend its own laws.

[4] To take this point even further, these decisions do not even draw us closer to such a scenario.