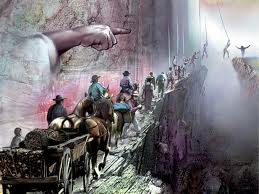 That is, until recently, when I was given an old tract written by Adventist pioneer J.N. Loughborough that told of a teaching I’d never heard of. I asked a couple of pastor friends about it. One said he had a dim recollection of it, though he couldn’t explain it; another said it was all new to him, too. (Which made me feel a little better—at least I wasn’t the only one who missed class that day.) Loughborough taught that before the Second Coming, Ellen White and the other pioneers would come alive again, well before Jesus’ return and the final resurrection, to accompany us through the events of the end times.

Around 1847, through Joseph Bates, the Whites and their friends learned the Sabbath message. Soon after, around 1848, the group was alarmed by European political developments. Between the French Revolution, Napoleon, and a restored Bourbon throne, France had kept Europe in a turmoil. But in 1848 King Louise Phillippe abdicated. Monarchs were being overthrown, a sign the ten toes were breaking apart and Jesus was about to assume control. (It is impossible for us to understand now the ferocity with which these people followed every political development in the Old World.) In that same year the Fox sisters heard rappings from the spirit world. European turmoil and spiritualism convinced some that this was the very beginning of the end.

One thing bothered them: if the Sabbath message was so important, why would God bring events to a head now before it could be spread to the world? According to Loughborough, “The Lord led their minds to the holding of the winds and wars and the sealing work…They found in their study of the Scriptures that the Seventh-day Sabbath was the sign of the living God and the seal of His law.…  [This] gave still greater force to the Sabbath message, and doubly assured them that this, as the sealing message, must be proclaimed to the world before the actual coming of Christ.”[1]

God was sealing particular individuals who accepted the Seventh-day Sabbath. The sealing time, based on a couple of testimonies, was thought to have begun between 1848 and 1850. Though Loughborough isn’t entirely clear if it ended there, he only mentions those who were present right then in his further discussion of the “sealed” believers, without whose presence he couldn’t imagine the events leading up to the Second Coming.

The other pivotal concept had to do with the 144,000, a specially-exalted group mentioned in  Revelation 14:1-4. These, says Loughborough, have to be living at the time of the second coming, because Revelation 14:3 says they were “redeemed from the earth.”

Interestingly, Ellen White says she will be among that group. She writes in Early Writings (14), “As we were about to enter the holy temple, Jesus raised His lovely voice and said, ‘Only the 144,000 enter this place,’…” and then she goes on to describe what she saw there, presumably as part of the 144,000. And why wouldn’t the sealed be among the 144,000? Writes Loughborough, “The faith of the Sabbath-keepers from that time until some of the modern ‘lights’ came in, was that those who died in the faith were among the sealed ones, and would constitute a part of the one hundred and forty-four thousand.”

This, said Loughborough, can only lead to one conclusion: that in the process of earth’s winding down, Ellen White and the other sealed believers will come alive and walk this earth so they can experience the end time with those of us who are alive, and then take their place among the 144,000. And there is much to experience. In Revelation 14, the assembling of the 144,000 seems to precede the events of the Three Angels and the tribulation. Ellen White makes that even clearer in The Great Controversy (649), where she speaks of the 144,000 as “‘they which came out of great tribulation;’ they have passed through the time of trouble such as never was since there was a nation.” “They have stood without an intercessor through the final outpouring of God’s judgments… They have seen the earth wasted with famine and pestilence, the sun having power to scorch men with great heat, and they themselves have endured suffering, hunger, and thirst.”

Ellen White didn’t experience that during her first lifetime. So it seemed to Loughborough that Ellen White will be alive with us to experience it in the end times. He thought that the resurrection described in Daniel 12:2 was a special resurrection, bringing back the Adventist pioneers to go with us through the final events.

It raises many questions. Did Ellen White herself expect this? Imagine how she’ll feel when she awakens, thinking she’s about to meet Jesus, and those around her will say, “No, no, Sister White: you’ve awakened just in time for the most horrible persecution of earth’s history.” When she comes forth, not in the normal sequence of events, will Adventists, told to reject anything from beyond the grave, accept her or assume she’s an evil spirit? Will she take a leadership role among us? Will the General Conference (should it still exist) welcome her and give her an office on the fourth floor?[2]

There are exegetical questions, too. Revelation 14:4 describes the 144,000 as sexual virgins, presumably male virgins, for they “did not defile themselves with women”. How does Ellen White fit into that picture? The only significant group of celibate religious men are Roman Catholics, and we surely don’t expect them to be on God’s side in the fulfillment of prophecy.

It’s all too complicated for me.

I was born into a church that was started on eschatology, has eschatology enshrined in its name, and seeks people to join the church on the expectation that Jesus is coming soon. I grew up with eschatology—not salvation—as the center of my faith. We talked constantly, in church and at home, about how soon Jesus was returning, such that every newscast was a potential fulfillment of prophecy. Our Roman Catholic neighbors were set to persecute us, even if they didn’t know it yet. We were on the verge of being prohibited worship on Sabbath because the state of North Dakota had a law that closed stores on Sunday. We were relieved when our Roman Catholic president was murdered. And we were always unsure whether we could actually still be saved, for probation might have already closed and we wouldn’t even know it!

Somewhere along the line, I simplified my eschatology. Right or wrong, here it is: Jesus says he is coming again, though I don’t know when. So I’ll just keep trusting Jesus and living my life as a Christian to the best of my ability, doing his work and sharing his love, until He does or until I die, whichever comes first.

That’s a view of Jesus’ return that I think is more defensible from Scripture than the one I was taught. Others can study current events, Ellen White and the Apocalyptic books for details like Loughborough did, though I warn you that the track record isn’t good: virtually every event that my denomination has pointed to, in my lifetime and for 110 years before that, that was said to be about to precipitate the imminent Second Coming has been wrong. If it hadn’t been, we wouldn’t still be here.

And as for trying to predict future end-time events, by the time you’re proved right or wrong you’ll be in heaven and you won’t care.

I know that won’t do for some. Someone will say that I’m one of those last day scoffers who, says Peter, ask “Where is the promise of his coming? for since the fathers fell asleep, all things continue as they were from the beginning of the creation” (1 Peter 3:3-4). The true scoffer would point out that Peter wrote this 2000 years ago and give a knowing head-nod. But I’m sure the world won’t go on like it is forever, because Jesus says it won’t. I just don’t know when it will end, so I’m going to keep trying to be more like Jesus and not worry too much about when. One way or another, I’ll see him face to face.

And I’m surely not going to wait around for Ellen White to rise out of her grave. By that time, I’ll have other things on my mind.

[1] J.N. Loughborough quotes are from Questions on the Sealing Message, self-published, 1916, and “The One Hundred and Forty-four Thousand, Review and Herald, June 14 and June 21, 1906. Both are available on line. Far from being forgotten by everyone, this belief in Ellen White’s pre-resurrection resurrection has seen a revival.

[2] That’s assuming we contact her right away. Perhaps we’d want to monitor Ellen White’s grave, like the always-on webcam pointed at the sepulcher of John Paul II.