The Spiritual Brain: A Scientific Examination of Religious Beliefs

The Spiritual Brain: A Scientific Examination of Religious Beliefs 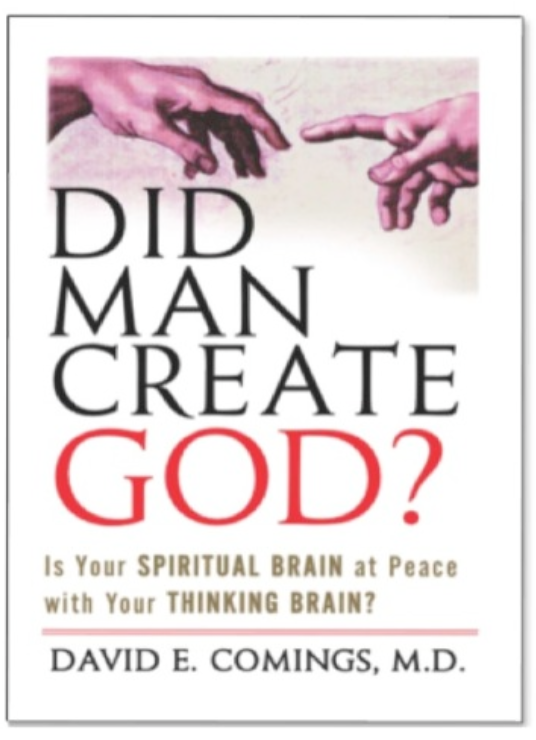 In a provocatively titled book, Did Man Create God? David Comings, a physician with fellowships in neuroscience and genetics, offers up an underlying thesis that humans have in fact created God. He supports this idea in a number of ways, but among these he explores with readers some of the latest brain science made possible with modern technology that has come on line within the past few decades. It includes a discussion of the various control centers in the brain that have been identified, allowing for pleasure, for engagement in social interactions, for executing rational thought, and for experiencing the spiritual and transcendental.

The idea that religion is a creation of human mind is likely alien to the thinking of most individuals, and certainly some will take strong exception to the notion short of some explanation. I would submit that while Comings may have reached certain conclusions that exclude a role for God, some of the ideas expressed in his thesis are not terribly controversial with a good many theologians who grapple with issues that emerge from Scriptures, including the different representations of God found in Scripture. It suggests a human component, involving human based projections to some extent. For sure, none of this has any necessary relationship to the question of God’s existence. It is logically possible that humans have created God in certain particulars, and that God also exists—they can both be true.

This particular essay is far from a book review, as the book itself is wide-ranging with over 600 pages. But, what I would like to do is discuss one small part of the book having to do with the latest research regarding the location of the human spiritual center. It is a fascinating adventure that reveals a whole lot about the human capacity to engage in religious thought and experience, as well as the possible lack thereof — for as it turns out, there is a genetic component to some of this.

Current research findings have pinpointed the temporal lobe as the central location involved in spirituality, and the evidence for this comes on many fronts. This would include studies involving electrical stimulation of the brain in conscious subjects, spontaneous and drug induced hallucinations, temporal lobe epilepsy (TLE), near death experiences (NDE), oxygen deprived brains, changes in cerebral blood flow, stress, music, traumatic lesions of the temporal lobe, and studies of individuals who manifest a range of spiritual emotions, including meditation and the ecstatic charismatic states associated with Pentecostalism. It is particularly noteworthy that the pathology associated with TLE, which is traceable to a variety of causal factors, including traumatic brain injury, is particularly vivid in its impact on the spiritual realm. As Comings puts it, “…over a period of many years it became apparent that there is something uniquely spiritual about seizure activity that emanated from the temporal lobes.”1

TLE was first documented more than a century ago, but received its largest initial boost from the clinical work of Wilder Penfield back in the first half of the 20th century, with him documenting its relationship to profoundly spiritual encounters.2 His mapping studies place both the right and left temporal lobes at the center of a variety of complex spiritual experiences that come in a range of manifestations, including trances, out-of-body experiences, automatic behaviors, feelings of being in the presence of others, angelic voices, of “intense meaningfulness,” of being “connected to some force greater than the self,” and/or direct interaction with God.3

Comings has reported that one of the most fascinating features of TLE is the nature of the religious feelings that may occur, many times producing profound personality changes. One form of TLE seizure is so dramatic that it has been labeled “ecstatic seizure.”4 This was first documented in 1980 by EEG, and appears in two forms. In the first of these forms the patient is described as having an “indescribable sense of joy” and has been clinically identified as emanating from the right temporal lobe.5  The second form is primarily “a cognitive experience of insight into the unity, harmony, joy, and divinity of all reality, usually with pleasurable effects.”6  Comings notes that a number of investigators who have studied ecstatic seizures associated with TLE suspect that it has had a significant impact upon cultural and religious history.7

A distinct and rare form of TLE is referred to as “the 4-H Syndrome—Hyper-religiousity, Hyposexuality, Humorlessness, and Hypergraphia. Essentially, this is a condition that is marked by a high level of religious concern, a muted focus on sexual interests, is one who takes life very seriously, and has a compulsion to write.

There have been many books written about NDE, with reports of those who have had close encounters with death. Some of the features of this condition as reported are feelings of serenity, of being in a tunnel, often ending with a very bright light, and an out-of-body experience. For many, NDE has resulted in a meaningful spiritual experience, and for them, proof of the existence of God and of life after death. On this, Comings has what he calls “a more sober and scientific account” which has been accounted for in a very controlled clinical setting. This developed through recognition of something similar experienced by pilots who are subject to extreme G-force, where they would sometimes black out and have a hallucinogenic experience.

In order to study this condition, a large centrifuge was built in order to create similar G-force conditions in a controlled environment.8 The discoveries that came out of this research seem to indicate that G-force can deprive the brain of oxygen, and as the brain becomes oxygen-starved certain manifestations of mind occur, likely caused by the release of certain neurotransmitters. As part of a chain reaction, this situation prompts the release of identified compounds that can produce hallucinogenic manifestations that are often associated with NDE. In the words of Comings, “rather than proving that God exists, NDE proves that when the brain is deprived of oxygen for prolonged periods of time, immediately prior to brain damage a range of physiological events occur that characterize NDE.” He concludes from the research that for those who suffer depression or fear death and then have an NDE, there is an overall improvement in mental function with greater stress tolerance and an enhanced appreciation for the spiritual aspects of life.9

Dr. Rich Strassman, a psychiatrist with the University of New Mexico, conducted a study of the effects of di-methyl-trypamine (DMT) in humans. The molecular structure of this drug is very similar to the neurotransmitter serotonin. From this study Strassman labeled DMT as The Spirit Molecule, based on the effect it had on human subjects.10 The effect of DMT can be very euphoric and pleasurable, and provided a powerful sense of spiritual connectedness, including interaction with non-human beings. One investigator reported that one of the most remarkable aspects of the DMT experience was the reporting of how real the experience of having had contact with other non-human beings felt, even though subjects knew that it was merely a drug-induced experience. As Comings observes, the sense of realness that subjects experienced under the influence of DMT, “goes to the heart of the conflict between science and faith.”11  At the very least it represents a cautionary flag when confronted by any source that claims to have been connected to God in some special way. On this, Comings notes that “it is simply necessary for the rational brain to understand that one of the characteristics of the spiritual brain is to strongly believe in something and have faith in something, even when the rational brain says it is unreasonable or that it did not and could not have happened. The rational brain needs to recognize that the spiritual brain can sometimes confuse externally generated reality with internally generated experience.”12

In addition to DMT, there are a number of other molecules that are similar to neurotransmitters, and which produce similar results as DMT.  Among these is psilocybin, which investigators found long-term positive effects, resulting in improved attitudes and appreciation of life, deeper religious faith, and greater empathy for others.

A number of studies indicate that observable changes occur in the temporal lobe associated with certain physical activities — namely charismatic endeavors, powerful music, and transcendental meditation. In reporting on this, Comings cites the work of several investigators, one of whom was Michael Persinger, a professor of psychology at Laurentian University in Ontario, Canada. He references an EEG study, which showed a connection between these activities and the temporal lobe, noting, for example, a spike in activity in this region of the brain, “during and only during protracted intermittent episodes of glossolalia.” Also emerging from this same study were findings that delta-wave dominant electrical seizures emanating from the temporal lobe occur during peak experiences for routine transcendental meditation. The author of this study proposed that such occurrences were “consistent with his hypothesis that transient, focal, epileptic-like electrical discharges in the temporal lobe, without convulsions, may be associated with strong spiritual and religious experiences.”13

Meanwhile, Persinger’s research suggests that a person’s “God belief” is composed of a combination of “God Experiences, and a God Concept,” with the former being associated more with the emotional self, and the latter being associated with the cognitive or thinking self. Persinger showed that experiencing the sacred is part of the natural construction of the temporal lobes, representing something on the order of its normal function, and not comparable to TLE or other extraordinary temporal lobe manifestations.

It was Persinger’s conclusion that the powerful combination of both the God Concept and God Experience delivers to many individuals dogmatic certitude in the accuracy of belief and the validity of the experience. While some elevate and praise such convictions, history has made abundantly clear that they come with a dark side, for a lot of blood has been shed by people who believed they were advancing the work of God.  In Comings’ words, such individuals “may kill or sacrifice themselves for [some] benefit, or proselytizes others to believe that they have the only true belief system. They can represent the most rabid of the religious believers.”14

This article merely skims the surface of this topic, but should provide the reader with some strategic sense of the currently reported scientific findings.One main observation is that Adventists have long rejected a dualistic notion of human nature, preferring to see people as a multi-dimensional unity. The scientific finds noted above regarding NDE would tend to support that understanding. Additionally, Adventist readers will likely recognize a tie between some of this recent research regarding TLE and the history of spiritual gifts within the Church. The idea that manifestations of this sort could have a very natural explanation is not new, given that this subject surfaced publicly around 30 years ago. What is new is the increasing clarity of understanding, which make that previous discussion more prescient and compelling. Because of the history of “spiritual gifts” within the Church, Adventists have long lived with a sense of special divine favor, so to consider a more mundane possibility could be a letdown for many. Yet, the picture that is beginning to emerge involves a sober reality check. In the face of an increased level of knowledge regarding natural brain processes and pathologies, the reality would seem to be encroaching upon certain aspects of earlier assumptions.