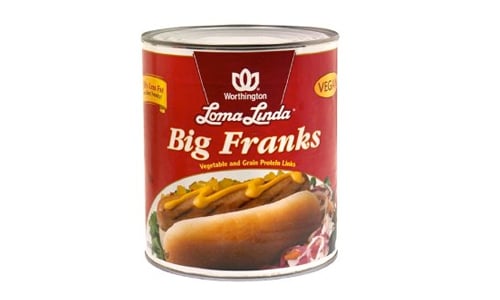 Today Atlantic Natural Foods, based in Nashville, North Carolina, announced it has bought the Loma Linda and Worthington brands of canned meat analog products, including FriChick, Choplets, Super-Links, Big Franks and Tender Bits. The Kellogg Company, based in Battle Creek, Michigan, had owned these meat alternative brands since it acquired Worthington Foods in Ohio in 1999.

For Kellogg — the maker of Corn Flakes, Special K, Rice Krispies, Nutri-Grain Bars, Eggo and Pop Tarts — the business of fake meat in a can was a minor one.

“This was a small piece in the Kellogg portfolio,” Kelly Krause, CEO of Atlantic Natural Foods, said today. “But for us, this is number one. . . We always felt there was a lot more you could do with it.”

Krause, who eats meat only occasionally herself, has no Adventist connection. She was named CEO of Atlantic Natural Foods, with 95 employees, last March.

Atlantic Natural Foods has been manufacturing the Worthington and Loma Linda canned foods since 2008, under license.

Recently the company approached Kellogg about buying the brands, as well as the Kaffree Roma alternative coffee brand, outright. “It started out almost as joking,” Krause said.

Krause said that the Kellogg Company was always a great partner to work with, but since the iconic “Adventist” brands were such a small business unit within a much larger company, they just weren’t getting the support they deserved. Sales were declining.

Atlantic Natural Foods had introduced two new meat substitute brands into its product line — Meatless Select and Caroline’s — which complemented the Worthington and Loma Linda brands. The company, with Krause at its helm, felt there was real opportunity in the meat analog market.

After approaching Kellogg about buying the products (and no one will share specific numbers or dollar amounts), everything happened very quickly. Within 30 days, the contracts were signed.

When asked about the sale today, Kellogg Company spokesperson Kris Charles had this to say:

“The MorningStar Farms brand will continue to be an integral part of our Frozen Foods business, as it has for many years. This transaction allows us to provide greater focus on our Specialty Channels business, which previously managed the Loma Linda and Worthington brands. We know our longtime partner, Atlantic Natural Foods, will continue to ensure brand authenticity while delivering the same great foods customers and consumers know and trust.”

Krause is excited about finding ways to revitalize the brands — and she says the company will be deliberate about focusing on its core market of Adventists. As part of her work, Krause has visited a California campmeeting and an ASI (Adventist-laymen’s Services and Industries) convention. She even attended the 2010 General Conference Session in Atlanta, Georgia.

She says her company wants to “reconnect with the customer through the church” and “bring back the excitement.” Atlantic Natural Foods intends to “do some of the things that made these products a success years ago.” They are in the initial stages of strategizing with an advertising agency, but community events and innovative marketing are being discussed.  The company wants to introduce new products and try to find ways to make the old ones more exciting.

The company’s main focus is the United States, but they are also in the Caribbean, and exploring the Canadian and South African markets. Krause was intrigued by many of the people she met at the GC and elsewhere, who wanted the products to be accessible in other parts of the world. With a shelf life of three years, Little Links and Vege-Burger might be able to make the jump.

And Krause feels that there is huge opportunity beyond the Adventist market, as well, as people search for meat alternatives. “You can start with a global approach,” she said. “There will not be enough animal protein to meet the needs of all individuals in the world by 2050.”

She notes the studies showing that Adventists tend to live longer, and then says that for people with dietary restrictions — or just for the large segment of the population who want to eat less meat — these foods are an affordable alternative.

Talking to Krause, it’s hard not to feel optimistic about the potential new life for these classic Adventist brands. Allan Buller, who worked for Worthington Foods for more than 50 years and retired as its CEO in 1986, died at the age of 95 last year. But it’s likely that he would have been enthusiastic about the new owner. In an interview with Spectrum in 2009, he said he “will be disappointed if Kellogg management does not aggressively protect its investment in what has been a promising vegetarian food business.”

The Loma Linda and Worthington brands are a very small slice of the American health food market. But Adventists got into the food business early. After all, Kellogg Company was started by brothers Will Keith Kellogg and John Harvey Kellogg, a noted member of the Adventist church for much of his life, who was greatly influenced by Ellen G. White’s health message. Worthington Foods ended up becoming a company with a sales volume of more than $200 million and 500 employees. And Sanitarium Health & Wellbeing in Australia, maker of the country’s most popular breakfast cereal, Weet-bix, is one of Australia’s largest food manufacturers — and wholly owned by the Adventist church.

While the sales of Vege-links and Big Franks may be declining now, Krause sees big potential in meat substitutes. Watch this space.