Finding the Adventists in Ferguson 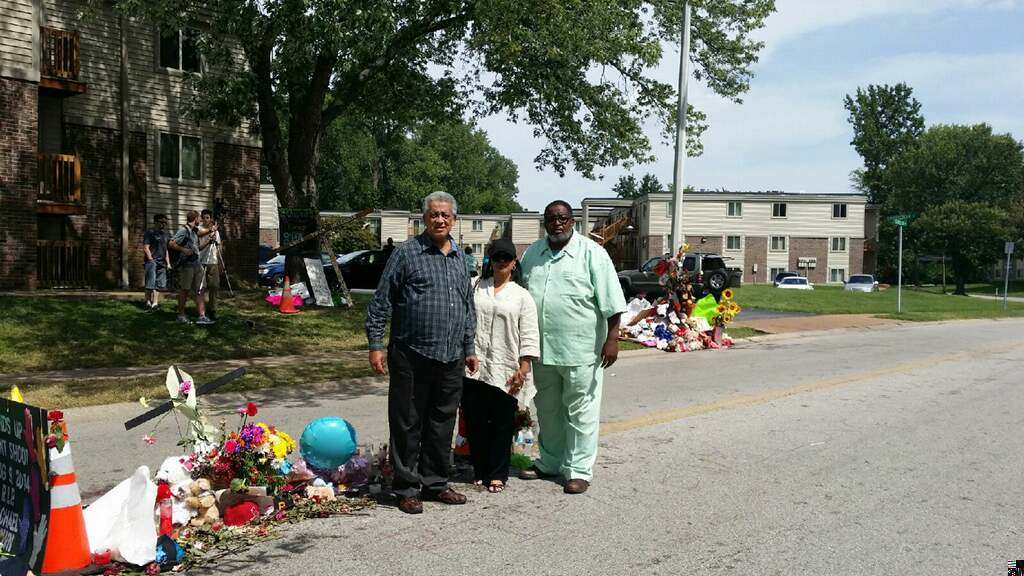 It’s just over a mile, or a four-minute drive, between Canfield Drive in the Canfield Green Apartments where 18-year-old Michael Brown was shot by a police officer on August 9, and the Northside Seventh-day Adventist Church on Lucas & Hunt Road, in St. Louis, Missouri.

The shopping center parking lot where the police set up their staging ground for operations in Ferguson is the same place Northside uses for overflow parking.

Northside is a large church, with about 1,500 members on the books, and an average of 300 to 400 of those attending in a month. It might be considered the most conservative of the black churches in town, according to its pastor.

During the unrest in Ferguson following the shooting, a few of the church’s members helped to clean up the streets, helped to pass out water to the marchers, and helped with some community service needs, according to Pastor Bryan Mann. Other Adventist pastors in the area were also involved in helping, he said.

Darrell Alexander, an Adventist minister of music who is now retired, and lives in the St. Louis area, said, “Do we actually get out there and help other people the way Jesus did, or do we just talk about it? If we are a church about people, and a church about helping the afflicted, then we need to be on point. We need to back that up with our actions.”

Shortly after the shooting, as Ferguson erupted with demonstrations and unrest, two of Alexander’s old friends he had grown up with in Atlanta — during the height of civil rights protests led by Martin Luther King, Jr — called him up and told him they were coming to St. Louis. Rocky Twyman, the man who started the Pray at the Pump movement and a member of the Rockville Adventist church, and Yolanda Banfield, a member of the Brinklow Adventist church (both in Maryland), felt impressed to travel to St. Louis and organize a prayer vigil.

“We believe the basic problem with the demonstrations [in Ferguson] is that leaders have failed to pattern them after those of civil rights icon Dr. Martin Luther King, Jr,” said Twyman. “Prayer, which we believe is the answer to every problem in life, does not play a prominent part as it did in the movement of the 1960s.”

Twyman and Alexander also felt that singing should play an important role in the non-violent demonstrations, the way that “We Shall Overcome” had such a place in the past.

So the three old friends decided to lead their own demonstration. They opened a Book of Racial Healing for people to sign and started gathering signatures in Maryland and DC before bringing the book to St. Louis. They led out in a prayer service on Friday night, August 22, following a town hall meeting at Greater St. Mark Family Church, near the center of the unrest. Reporters were there, as well as people from the community and people who had traveled from other states and cities.

The friends had contacted Northside, and had asked at least that the Northside church choir come and sing for the prayer vigil, according to Twyman, but were told that the choir members couldn’t make it because they had their rehearsal at that time.

The following day, the friends organized a short memorial service at the site of the shooting at noon, the time Michael Brown was shot, exactly two weeks earlier. A group of about 70 from the St. Louis Community College happened to be there at that time, and they made up the bulk of the participants. (A reporter from Maryland's Montgomery Sentinel, which made the Marylanders a key part of its Ferguson coverage, was also there. Watch a video here.) The event started with a moment of silence, then there was prayer, singing and impromptu speeches.

“We revived the civil rights movement of the 60s,” Twyman said. “It was so powerful.”

Alexander said: “We hugged people, we passed out tracts, we sang, people prayed — we prayed for the Brown family, for the police officer’s family, we prayed for justice, and healing of the racial divide in Ferguson."

“You know, the weirdest thing out there, even though we didn’t know each personally, we all felt connected. Nobody cared if you were white, black, Puerto Rican, Hispanic, what color, creed or nationality you were — we joined hands, we sang ‘We Shall Overcome’ at that makeshift alter on the road where he was actually shot dead, and all those strangers felt like family to me. . . That was the feeling that made me me realize it was not a black and white issue, but a human rights issue.”

Twyman said they were so disappointed that the members of Northside were not able to leave church a little early and join them.

He felt that local Adventists missed an opportunity, and believes that it all goes back to an Adventist tradition of not getting involved in civil rights issues, and the way the church by and large has never been very involved in large social movements. “There was no support for the civil rights movement in the 1960s from Adventists,” Twyman said. “It was kind of terrible. All the other churches in the south were getting involved, but Adventist members were told not to; there is something wrong racially in the Adventist church.”

The pastor of the Northside Adventist Church agrees about the historical lack of involvement of the church as a whole. “When there is any kind of social incident or issue that is being dealt with in a community, country or nation, we are very slow to respond, and very cautious in responding,” Bryan Mann said.

Mann thought that the statement released by Dan Jackson, president of the North American Division, on August 21, was excellent.

In the statement, Jackson said he was praying for peace in Ferguson, extended condolences to the family of Michael Brown, expressed hope that the truth would emerge about the circumstances of Brown’s death, and suggested that the unrest in Ferguson was part of a deeper problem.

“I see Dan Jackson as the kind of person who is really concerned about making an impact in our communities, and about helping Adventists to break down the barriers that we have so we can reach souls for Christ,” Mann said.

But not everyone felt the statement went far enough. “He [Jackson] never said what the ‘deeper problem’ was,” Alexander said. “And he wouldn’t, because we are a conservative church. But we all know what the deeper problem is. . . I can’t judge, but it appears that whenever it comes to anything race-related, we have a problem.”

Jackson is coincidentally scheduled to speak at the Northside Church next weekend, September 5 and 6, in a campmeeting weekend planned almost two years ago. “This is the way the Lord works things out,” Mann said.

Pastor Bryan Mann had to leave for the Pathfinder Camporee in Oshkosh, Wisconsin, just after the shooting of Michael Brown, and was gone for a week. “That really made me feel bad,” Mann said. “I felt that I should have been there. . . Things had started cooling down by the time I got back,” Mann said. Mann was able to attend the funeral of Michael Brown last Monday, August 25.

While he was away, some community leaders contacted the Adventist Northside church to ask if they could use the facility for some coordination meetings. The head elder polled the other elders, and the consensus was to be cautious and ask the leaders to meet somewhere else. “The problem was that with the pastor away, they were extra cautious,” Mann said. They worried about legal aspects, safety issues, and so on.

“Adventists traditionally don’t get involved with the ecumenical movement,” Mann said. “There are some who want to just go it alone as Adventists. I think there is a time for us to step up and show an Adventist presence, but it’s important to listen to the needs of my congregation.” 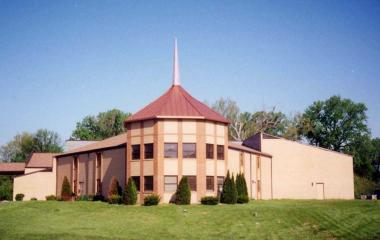 Mann said that he was encouraged by the way the pastors in the Ferguson community are working together, trusting each other, and dealing with difficult issues. A local community faith blog that shares news of meetings, marches, vigils and community service opportunities has helped to coordinate donation items from all the different churches/faith centers in the area, and Northside and the Adventists have collected donations of baby items for needy families — their assigned category.

The lack of coordination and agreement among the Adventist pastors, on the other hand, has been frustrating. An Adventist group called the Area Ministers and Pastors of St Louis (AMPS) got together (before the NAD statement was released) and discussed putting out its own statement. “As we started to discuss what the statement would look like and what would be included, it became very clear that there was more than one way to look at it,” Mann said. When some of the white pastors suggested that in order to be balanced the statement should say the church was praying for both the families of Michael Brown and Darren Wilson, the police officer who shot him, some of the black pastors were taken aback.

“This exposed that we need to have more conversations in regard to race — not only in the church but the in the nation as a whole,” Mann said. “There is a lack of understanding — and even ignorance — on all sides. You can’t really move forward until people are educated.”

Mann felt that Jackson’s statement struck just the right tone, was progressive, and was everything that AMPS’ statement — which was eventually abandoned — should have been.

One other Adventist focus on Ferguson took place at Oakwood University, the church's historically black university in Huntsville, Alabama, where students organized a demonstration in support of Michael Brown that made it onto the Rachel Maddow show. 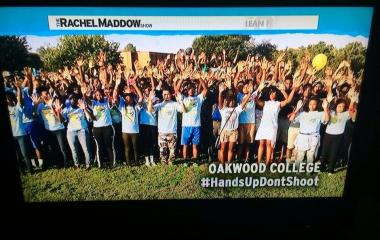 Alexander points to the Greater St. Mark Family Church as an example of one of the local churches that got involved in helping the community in the way he felt the Adventist church should have during the recent demonstrations and rioting. St. Mark hosted a large community meeting the day after the shooting, a large service with the Reverend Al Sharpton speaking on August 12, and many other subsequent meetings and services, including the prayer vigil he, Twyman and Banfield organized. The church provided counseling and was a first-aid station for wounded protestors. It served as the location for the televised autopsy report and “became a haven for a lot of people,” Alexander said.

Alexander felt compelled to get personally involved. “I was part of the protests at night, in the morning, and during the day,” he said. “I was part of the front line, protesting against injustices that were done. I stayed even when the guards came and had guns pointed at me. It was scary because these people don’t know you, you have the feeling they are just itching to use those guns, and looking for a reason to shoot. It was very tense."

"But it was something I felt I needed to be a part of. It’s more than just a black and white issue — it’s a human rights issue.”

Image: Rocky Twyman, Yolanda Banfield and Darrell Alexander at the makeshift memorial on Canfield Drive where Michael Brown was killed.