Under Investigation for Antisemitism, Walter Veith Banned in Churches by European Adventist Leaders 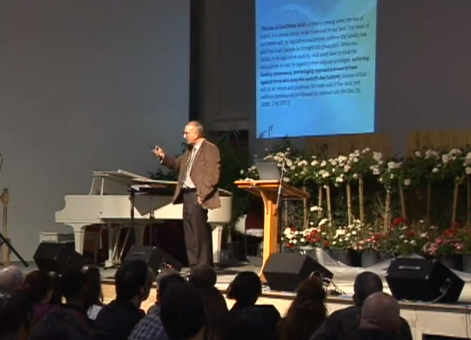 Walter Veith, a speaker for Amazing Discoveries™,* is under investigation by the German government regarding allegations of antisemitism and incitement of popular hatred [Volksverhetzung].

Because it is not clear who complained, Walter Veith has falsely lashed out at Spectrum and another independent Adventist magazine in Germany, EANN, edited by the former Euro-Africa Division communication director. EANN published an article, "Veith's dangerous game with the Jewish question - a disturbing fact-check" on Veith's talk titled "King of the North-Part 2." In it Veith, a noted conspiracy theorist, mixed interpretations of the Bible with theories about Jesuit and Masonic roles in the Holocaust, offensive language about "little yellow cloth" and "herding" of Jews and a positive citation of Benjamin Freedman, a "professional antisemite" according to the Anti-Defemation League.

Not only has this drawn the attention of the authorities, but both German Unions and the Inter-European Division have issued statements prohibiting Veith from speaking in Adventist churches.

This has only played into Veith's persecution complex as his public comments includes lists of Ellen White comments showing that this "violent opposition" of him is a sign of the last days. In a letter to the German Unions, Veith has appealed to his South African history as a campaigner against racism, credited the offense to his sloppy German while also doubling-down on his dualist worldview:

This is not a conspiracy theory but a prophetic reality and the Spirit of Prophecy warns that if we associate with those who war against Christ we will soon come to see matters in the same light as they and lose our discernment. I plead with you dear brethren to note the serious times we are living in and heed the warnings that God has so graciously given us through the Spirit of Prophecy.

The purpose of the lecture was to show that literal Israel (both physically and theologically) can in no way represent the ‘Spiritual Israel’ of the Bible and that any theological gymnastics to the contrary cannot negate this fact. Indeed this is the Advent position and stands contrary to most modern theological views held by other evangelicals. My purpose was not to attack the Jews but to defend the Advent position. Of necessity the Advent position will create controversy as it stands in juxtaposition to all other views. It is my sincere wish that that all people, including the Jews, will accept the Advent position which glorifies Christ and firmly establishes Him as Saviour and Ruler of the ‘Israel of God’.

Even in his apology, Veith shows the underlying anti-Jewish supersessionist idealogy that drives his conspiratorial gloss on Adventist theology. In mid-November, Adventist leaders in Germany, Switzerland and Austria issued the following statement (translated from the German):

We dissociate from such statements and conspiracy. . . Here is a speculative worldview, there is no basis in the Bible and it distracts from the real purpose of the gospel. Moreover, that the manner of the presentation is not an ethically justifiable way of dealing with other religions. The Adventist departments and communities are encouraged to ensure that such events take place neither in our name nor in our premises.

In a November 30 letter cc'ed to Ted Wilson, Bruno Vertallier, President of the Inter-European Division wrote the following:

The Inter-European Division's Administrative Committee was profoundly disturbed by the contents of your presentation at the Seventh-day Adventist Church of Nurnberg-Marienberg in Germany, on October 20, 2012. The committee does not take lightly what you said for it is absolutely inappropriate to speak words like "yellow piece of clothing" and others in connection with the Jewish past. This is not the way we should speak about the Jews in the Seventh-day Adventist church. These comments have hurt people. I have personally tried on a few occasions to contact you by phone and e-mail to discuss this matter with you. However, I did not get a response from you. The committee acknowledges your apology concerning some of the expressions you used in association with the Jewish people. Understanding that, this is of the highest importance the committee asks you that you meet with the Inter-European Division's officers during your next trip to our territories, so that we get some clarification on this issue and also about your theories regarding Freemasons and Jesuits amongst other topics.

Last year, in a Spectrum article that holds the record for comments—1383—Ron Osborn explored "The Dark Fantasy World of Walter Veith:"

The harm done to Adventism’s name by such unscrupulous conspiracy evangelism and “scientific” creationism might tempt one to offer an elaborate counter-conspiracy theory (“thesis and antithesis”) to explain Veith himself. What better way for the secret societies to disorient Adventists and discredit the Adventist church, after all, than to dispatch someone like Veith expounding in Adventism’s name about how Nelson Mandela and Joseph Stalin are spiritual brothers in the same “club” controlled by Rome? Or how the Freemasons working at the bidding of Rome may well have journeyed to the moon in the 1960s in search of the lost technology of the antideluvians, since the pre-flood civilization of the days of Noah “surely got there” first?  Is it really just a coincidence that “Veith” is the Germanized name for Vitus, who was one of the Fourteen Holy Helpers of the Roman Catholic Church and who also happens to be the patron saint of actors?

Image: Walter Veith doing a talk sponsored by the Beaumont Seventh-day Adventist church and presented at the Loma Linda Filipino church in 2011.

*This story was updated to reflect Walter Veith's connection to Amazing Discoveries™, a media company that works closely with Walter Veith and a few other speakers to promote their presentations.