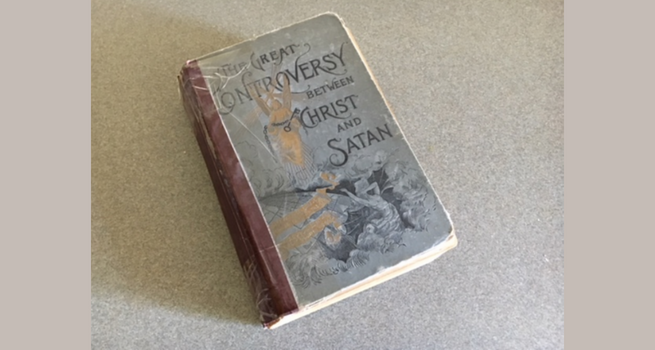 E. G. White’s (EGW) Great Controversy (GC) is, by all accounts, the most important Adventist publication. And for the same reason, it poses grave problems for the church if concerns that limit its influence are not addressed. Our church spends more to publish and circulate this book than any other because, in the GC, many distinctive Adventist positions are compellingly advocated. These include explanations for the 1844 Great Disappointment, Christ’s Ministry in the Heavenly Sanctuary, the Investigative Judgment, and the Universal Sunday Law/Mark of the Beast.

Billed as a “cosmic” story of how the controversy between Christ and Satan began and how it will end, the GC could be divided into two broad sections. The first part is an “historical” overview of how God led his faithful followers, beginning with the early Christian church through the Protestant Reformation, leading to the post-1844 Adventist Movement of Ellen White’s experience. The second part is a foretelling of how God will lead his elect, the remnant, through the various Times of Trouble that culminate in the Parousia, the literal appearance of Jesus through the clouds at his second advent.

When she was alive, she saw the book through four editions and three revisions. First published in 1858 with an approximate word count of 48,000, each succeeding revision (discounting the 1888 version) took about 26 years. The 1884 edition, the second, tripled the word count of its predecessor to almost 137,000. The last revision, which occurred in 1911, four years before EGW’s death, has a word count of 241,000. Information about revision dates and word counts are provided to make two points.  First, EGW never considered this book as a finished product. She kept working at it, revising it four times in 57 years. Second, while she left out material from previous editions, she always added more. The difference between the first and last editions was a staggering 193,000 words, an 80% increase.

Since the 1911 edition over a 100 years ago, it has not been updated in any form. Thus, the book that historically had been the pace-setter for Adventist theology has become dormant, effectively freezing Adventist theology in its tracks. What this situation has fostered is a perpetuation, and in some instances codification, of many 19th and early 20th century EGW understandings of our world and our place in it which some believe should not be “disturbed.” Unfortunately, or maybe fortunately, the book’s subject and viewpoints beg for engagement, both inside and outside the church. There are several issues arising from the GC that have defied, and continue to defy, settlement within the church, periodically erupting into open conflicts.

One such question is our apocalyptical dating system that gets us to 1844. The disquiet about this led to Glacier View in 1980 during Neal Wilson’s presidency. Desmond Ford dared to question our teaching about Christ’s Heavenly Ministry and the Investigative Judgment and ended up losing his teaching job as well as his ministerial license. Among Ford’s many concerns was our interpretation of Daniel 8:14. The case for arriving at 1844 through Daniel 8:14 has always enjoyed healthy skepticism among Adventist theologians because it can succeed only by using the KJV. In no other reputable translation—not the NIV, RSV, NJB, NEB—is the period rendered 2300 “days” as the KJV does. All others use the more correct “2300 evenings and mornings,” analogous to the “evening and morning” phraseology in early Genesis. The inconvenient fact is that “2300 evenings and mornings” do not add up to the KJV’s mistranslated “2300 days,” just as the “evenings and mornings” that set apart successive days of creation week do not add up to 14 days. In Daniel 8:14, the sum in days is 1250, a number which damages our case to arrive at 1844—and everything connected to it. So we continue to infer that, apart from the KJV, all other translations of this “exclusive Adventist” verse are wrong. But this position comes with risks, one being that our young, the church’s future, do not read the KJV.

Another contentious issue given credence in the GC is our current Young Earth Creation (YEC) posture found in Fundamental Beliefs (FB) # 6. This view contends that the Earth was created only about six thousand years ago. EGW, like many of her contemporaries, bought into this now discredited chronology based on calculations by Bishop Ussher, using a literal reading of the Torah. His methodology was also used in arriving at the conclusion that Christ would return in 2000.

In her voluminous writings, EGW made forty-two, 6000-year known statements in primary sources, always in affirmation. The following quote is typical. As she brings the great controversy story to a close, she invokes, as a fait accompli, this chronology reminding us of Satan’s ills:  "For six thousand years he has wrought his will, filling the earth with woe and causing grief throughout the universe. . . . Now God’s creatures are forever delivered from his presence and temptation."(GC. p 381) This is the most specific time forecast about Christ’s return since the 1844 prediction—and harbors potential embarrassment for the church if time continues beyond the 6000 years and Christ has not come.

As Fundamental Beliefs go, # 6 (Creation) is a recent addition. For 50 years, from 1931 when our initial 22 Fundamental Principles were published, until 1980, the church did not have an official belief statement on “Creation.” It was not until the General Conference session in 1980, with approval of a list of 27 FB that, for the first time, we introduced our Creation belief. This maiden Creation statement was purposefully non-specific, thanks to the influence of the Andrews University Seminary committee tasked with the final editing. Mindful of the diverse constituencies and understandings within the church about dating origins, especially within the academic scientific community, the seminary committee produced a statement with a “big tent” appeal.

This amorphous statement apparently served adequately for 30 years, until 2010, when the newly elected president of the General Conference Ted Wilson motioned for a revision aimed at tightening the wording of FB #6. The GC statement alluded to above and others by EGW were referenced by President Wilson and his supporters to justify this move. So, since 2010, the word “recent,” and the phrase, “literal six-day creation,” have become an official part of Adventists’ YEC lexicon.

In the meantime, our church schools continue to educate young minds, who are instructed from K through 8, that the universe is very young, a mere 6000 years. Then, as soon as they enter ninth grade, we flip the template. From high school onward, because we want our young students to succeed in the unforgivingly scientific/empiricist marketplace, we jettison the sheltering denominational textbooks. Their new ones introduce them to stupendous new Earth-age figures, orders of magnitude from their former pre-high school 6000-year anchor. This produces a budding crisis of what to believe: empirical data or faith-based ideas?

Using church retention to measure success, we don’t seem to be doing well. Even with youth raised in Adventist homes and educated entirely in Adventist schools, the higher their educational attainment, the more likelihood that they will leave the church. The problem is not education per se but, more likely, the church’s inability or unwillingness to update its “truths.”

A final limitation I see with the GC is its restricted audience appeal. Contemporary readers notice that the assumed historical “cosmic” story in the first part of the book is no more than an apologetic flavored recitation of known Catholic and Reformation history that played out in Europe and America. Certainly, the exploits of God’s faithful followers were not limited to Europe and America. Those with different heritage who read this book are left wondering where they fit into the GC canvass. Where, for instance, is any place in my native Africa on these pages if this indeed is a “cosmic” portrait? Where is China? India? Latin America? When whole chapters are devoted to what in hindsight seem ordinary events in one European country or another—Belgium, Britain, Germany, France, Sweden—it doesn’t seem too trivial to inquire about God’s faithful others in far-flung nations. Neither is it impertinent to question the near complete absence of commentary on other world religions like Islam and Hinduism, which together, have more adherents than Christianity and are as impactful in our world today.

The risk to the GC’s credibility is not only that it is too vitriolic against Catholicism or too Euro and America-centric. The real risk is that it is too exclusionary in its focus. By telling a purported universal story and prophesying largely through the narrow prism of her known universe, EGW unwittingly “otherizes” a big slice of the world, who may, in trying to read the book, promptly ignore it.

For over a hundred years since the GC was last revised, many remarkable events have happened in the larger world. We have, for example, gone through two world wars, which together have informed our understanding of who we are as humans. These wars revealed our capacity to be inhuman to each other on a formerly unimaginable scale. The unbridled savagery unleashed, as instigated by European Christian nations, helps explain why Europe has retreated from Christianity and more frequently embraced secularism. The Europe EGW writes about in the GC bears little resemblance to the contemporary landscape.

So how do we make the book better and relevant? We revise—as often as needed. And in our revisions, we should never be afraid of correcting where previous editions made claims that are erroneous or unkind. Above all, future revisions should expand the tent. But I’m afraid these are pipe dreams because this is the very thing we will not consider, certainly not by our current leadership.

Part of our predicament, as I see it, is our unwillingness (or is it timidity?) to re-examine positions once adopted. The roots for this goes back to our founding when we refused to concede that we had been wrong about our prediction that Jesus would return in October 1844. Instead, we recalibrated and found a new application of our prediction in the Heavenly Sanctuary and Investigative Judgment doctrines.

It comes down to whether we can imagine uncoupling the church from demonstrable errors if those errors were at some point in our past endorsed by Ellen White. Does the fact that a “belief” has become a dogma and has the backing of a prophetess make it untouchable even confronted by demonstrable error?

No teaching—recognizing that all biblical teachings are based on textual interpretations—should be deemed untouchable for all time if found to be flawed.  We should constantly validate all our teachings (“examine them carefully,” is Paul’s admonition). If in the process we find that some have no standing, we should set them aside and adopt the better good. It was through such re-examinations that our forebears repudiated slavery even though scripture seemed to endorse it, and the practice was once firmly believed. The Catholic Inquisition condemned Galileo for refuting the Creation dogma that “God fixed the Earth upon its foundations, not to be moved forever.”  He was forced to recant his findings that the Earth moves around the sun. It took 350 years for the church to finally concede that he was right. We should not make the same mistake in supporting error and certainly not wait as long to concede we erred.