Lessons from the Life of S.N. Haskell 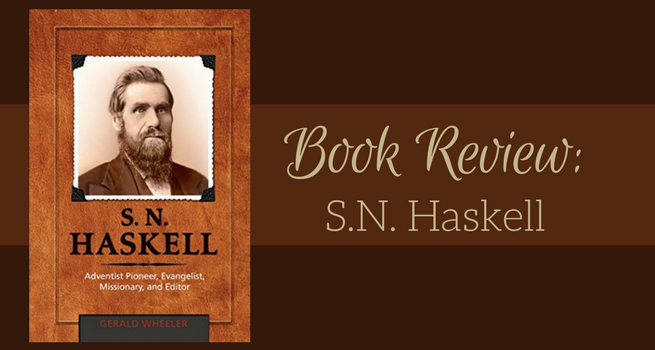 Seeing a new book that was written by someone I happen to know always awakens my curiosity. That was the case when I saw a book by Gerald Wheeler that was recently published by the Pacific Press. I first met Gerald, some forty years ago, at a convention for Adventist editors that was held in the Adventist conference center Glacier View—high in the Rocky Mountains. (This place would later achieve some notoriety in the Adventist Church as the place where a church tribunal condemned Desmond Ford.) Gerald spent his entire church career at the Review and Herald Publishing Association and was widely known as a highly skilled book editor.

Wheeler’s first biography of an Adventist leader in the early period of Adventist history appeared in 2003: James White: Innovator and Overcomer. The book was based on meticulous research and gave an honest, and at times quite astonishing, picture of James White, the husband of Ellen G. White. Thus it was with great expectations that I started reading his newest biography: S.N. Haskell: Adventist Pioneer, Evangelist, Missionary, and Editor. I was not disappointed.

Stephen Haskell (1833-1922) did not belong to the oldest group of pioneers who had a personal involvement with the Miller movement. However, he was one of the many self-made men who, without much formal education, grew into many-faceted and powerful church leaders. Wheeler follows Haskell through the various phases of his long life, in various roles (and often combinations of roles). He follows him to the places in the United States where he worked (first in the East, then more westward, and ultimately in California), and on his many journeys to Europe and Australia, and other continents, which might take him away from home for many months or even longer than a year.

It was the life of a hard-working, utterly dedicated and versatile man, but also of an individual who could be very stubborn and was not always ready to accept advice from others. He received countless letters and “testimonies” from Ellen White. Although he received much criticism from her, he gradually became very close to her. He even proposed to her after she had become a widow. The book is also very valuable in that it consistently places Haskell in the time and culture in which he lived and against the background of the developments (and troubles) of the steadily growing Advent movement.

I recommend this book in particular to those who, like me, enjoy reading biographies. However, I would also strongly recommend it to those Adventists who keep on telling us that the Adventist Church should follow the patterns laid out by the pioneers of the church. It is true that in Haskell’s days many good things happened in the church, and that there were many committed people who brought great sacrifices “for the cause.” There is much in the history of that period that can inspire us. But the book about Haskell also clearly shows that there was much in the church that was not so good. There was rivalry between leaders. At times there were bizarre ideas that brought confusion. Projects could fail because of mismanagement and often there was a distinct lack of unity. Many decided to join the church, but many also left again—some respected leaders among them.

In actual fact there is not that much difference between the present and the past. Today’s church is far from perfect, and that is true of the leaders as well as the members in the pew. This is no excuse to just accept whatever happens. This book is, however, a strong warning not to be too quick in assuming that the church of the past—and certainly in the days of the pioneers—was far better than it is today. And a nostalgic looking backwards to an often romanticized past is no panacea for all the problems and challenges the church must face today and will be confronted with in the future. If in doubt, allow yourself to be convinced by reading this fascinating biography of Haskell (which may be ordered at Amazon.com).

Reinder Bruinsma is a native of the Netherlands who retired in 2007 after a long career in pastoral, editorial, teaching, and church leadership assignments in Europe, the United States, and West Africa. After receiving a bachelor’s degree from Newbold College and a master’s degree from Andrews University, he earned a bachelor of divinity with honors and a doctorate in church history from the University of London. He recently interrupted his retirement to serve as the president of the Seventh-day Adventist Church in Belgium and Luxemburg. He has authored more than twenty books, in Dutch and English, and a large number of articles. He has also translated various theological books from Dutch into English.

This review first appeared on the author's blog and is reprinted here with permission.