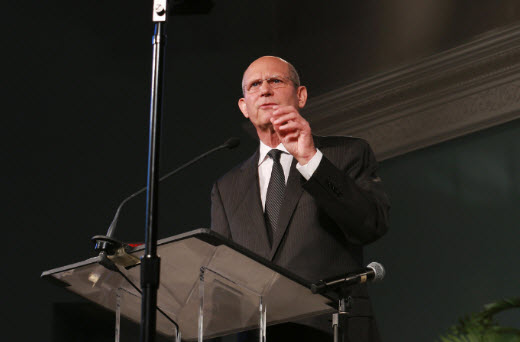 Outlawing Women’s Ordination (WO) apparently is how Elder Ted Wilson wants to define his authoritarian leadership. We have seen enough of his approach and should want no more. San Antonio ought to have shown him that his methods were flawed, but he has been determined to stay the course. Instead of working toward a consensus position that capitalizes on our church’s enviable diversity, he advocated a tribal position that grossly confused uniformity and conformity with unity.

One year after San Antonio, his miscalculation showed. Unions that, before then, had committed to ordaining women into ministry, were not persuaded at the world gathering to abandon their sisters in ministry. Their position was a moral stance. This should have been anticipated by Wilson and his supporters. After all, the constituents in the “offending” unions—including Wilson’s home union, the Columbia Union Conference—had voted overwhelmingly in favor of WO, even in the face of his distressing threat of “serious consequences.” But Wilson appeared to have been caught unprepared by the resilience and commitment of the unyielding unions. So he went to the 2016 Annual Council (AC) meetings with a plan that would have disenfranchised all unions that affirm women to be as welcome in the Lord’s vineyard as men.

But caution prevailed, and The Unity Oversight Committee (UOSC) was born with a one-year mandate—and a five-step process—to facilitate reconciliation between the American and European unions who were at odds with the 2015 GC session vote. The GC president would agree to a year to let this process of reconciliation, the so-called year of grace, play out. The year went by quickly, and all sides agreed that the UOSC’s results were inconclusive because the mandated process had not been fully implemented.

This is the background to the events that occurred at this year’s AC. The GC president was aware that the UOSC did not complete its assignment. Knowing this, he still insisted on bringing a retributive agenda item that targeted the leaders of those “defiant” unions that chose to ordain women. To do this, Wilson needed the support of the General Conference Division Offices (GCDO), the roughly seventy leaders from the 13 divisions and selected GC officers who control the agenda. The initial vote, by physically present members, recommended against including the contentious item—by three votes. The GC president then took the unusual, and arguably unconstitutional, step of canvassing absent committee members who had not read the document. Their votes were added to the original count, producing a 36 to 35 tally in favor. Wilson then placed this highly charged issue onto the agenda.

One ought to expect that any reflective administrator, faced with a situation where the advisory core was this deeply divided, would see this as a bad omen and reconsider presenting it to a wider body. Not Elder Wilson. He seemingly deals in absolutes.  If you believe that God supports your positions, no matter how divisive to the body you lead, you might resort to such a maneuver because winning a vote is what demonstrates that God favors your position. It is a circular and dizzying state of mind for a leader.

Wilson did not hesitate—and he knows how to count. Before San Antonio, he canvassed and secured the votes of leaders from certain areas of the global church. Then in San Antonio, knowing he had the numbers, he dug in his heels.

Now, at this AC, the unspoken word was secrecy. On Monday, Dan Jackson, president of the North America Division, asked Wilson to comment on the voting process that resulted in including the document under consideration to the AC agenda. In answer, Wilson lamented the “leaks” that, he asserted, resulted in proprietary information going to people who should not have received it.  He would not comment on whether that information should have been secret in the first place.

Why was it necessary to keep the 14-page document from the very people who would deliberate and vote on it on Monday?  Just before the close of Sunday’s session, Dave Weigley, president of Columbia Union Conference, asked Wilson to email the document to voting members so they could review and pray over it before they discussed it the next day.  Wilson’s quick retort—that the document will be distributed on Monday afternoon—was not only dismissive but evidenced, to me, a dictatorial instinct.  He gave no reason why the information could not then be made available to all who needed it. His position was paramount.  This dismissive attitude to questions he disliked was on display earlier the same day when Ricardo Graham, president of the Pacific Union Conference, objected to recording the GC secretary’s report because he saw Secretary G.T. Ng’s “Adventism 911” as a presentation, not a report.  To this, Wilson, obviously annoyed, interjected: “This will be recorded as a report. The secretary can say anything he wants to say.  I thank God for the secretary.”

In hindsight, the president would have been better served if he had acceded to Weigley’s respectful request because one of the key objections to voting on the document was that participants had not had enough time to read the 14 pages—which took 45 minutes of verbal reading—let alone deliberate on its wording and implications. If the GC president had made the document available on Sunday evening, the time argument would not have been nearly as germane. This is how “strong men” types often get hoisted on their own petard.

At last, Monday afternoon came, and the tension in the room was every bit as thick as anticipated.  After the document, with the catch-all title, "Procedures for Reconciliation and Adherence to Church Governance," was read and comments were entertained, the objections then raised were incessant. Opposition to adopting the document verbatim was centered on two main issues: 1) signing a loyalty oath, and 2) losing voice and vote.  It did not seem right or fair that leaders who were chosen by their constituents would lose voice and vote if they refused to sign a document that would invalidate the will of those they represent.  Even more perplexing was the part of the document that mandated still taking voice and vote from those leaders who sign the document but are later perceived as acting in bad faith.

In my mind, this resembles McCarthyism.  Voice was equated to freedom of speech, and cramping it because of disagreement with policy was likened to taking a leader’s human rights.  Others also saw the irony of an attempt to steer the church away from its Protestant moorings and toward a Catholic posture—in the 500th anniversary of Luther’s reformation.

Then the former GC president, Jan Paulsen, had the mic.  A hush ensued. And with characteristic quiet dignity, he stated that his sign of loyalty is in his heart. That after 50 years of service to the church he loves, he does not need to sign a loyalty oath to demonstrate his commitment to the church and its mission.  With a hint of a quiver in his voice and the clarity of an old testament prophet, he declared with unpretentious authority: “I do not see the hand of God in this.”  Then he gave up the mic.

Wilson, sensing an important shift, employed pastor Maek Finley to pray.  But there was a collective unconscious exhalation in the tensed auditorium that suggested perhaps this document might not pass.

Paulsen notwithstanding, I think the real reason Wilson’s overreach failed, at least on this occasion, was hubris. The seeds for this were sown during the Monday morning auditing report by Paul Douglas, director of the General Conference Auditing Service. He revealed that 81% of global church entities were, to varying extents, non-compliant with church policy. Douglas’ presentation, coming just before the main agenda item of the day, cast a sobering context for what came after.  President Wilson had carefully couched his explanation for the unprecedented step he was on the verge of taking—as response to unions who were non-compliant with GC policy.

For the first time a broad section of the representatives at the gathering could also see that this process could have unintended consequences. Few supporters from Wilson’s “base” subsequently went to the mic. Even when they did, those who spoke in support seemed tepid and unsure. Overreaching is often what wounds a dictatorial approach, and Wilson’s was a giant overreach.

The 62% to 38% vote to send the document back to its originating committee was a decisive repudiation of the strongman tactics Ted Wilson used throughout the process. Our president’s seven-year leadership has been a continuous tugging at the seams of our togetherness.  He has prioritized his antipathy toward women in ministry over the church’s higher goal of mission.  He has spent more time and resources engaged in this private campaign than focusing the church on what truly binds us.  He is a formidable politician, but an astute one would let this alien document die in committee. But knowing that, will Wilson, like Captain Ahab in Melville’s novel Moby Dick, follow this obsession through, even at the risk of dooming the ship? We can all hope not.