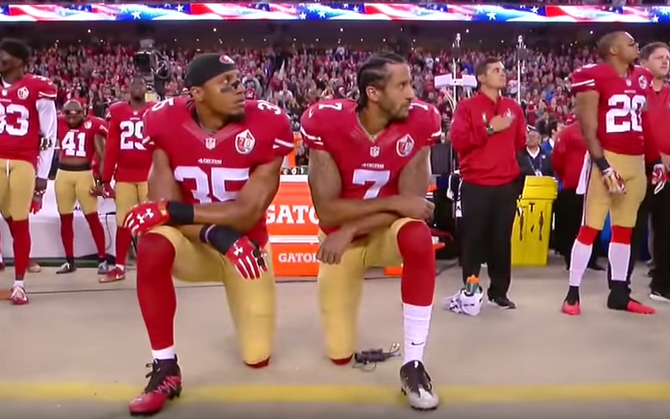 "Then the herald cried aloud, To you it is commanded, O peoples, nations, and languages, that at what time ye hear the sound of the cornet, flute, harp, sackbut, psaltery, dulcimer, and all kinds of music, ye fall down and worship the golden image that Nebuchadnezzar the king hath set up; and whoso falleth not down and worshippeth shall the same hour be cast into the midst of a burning fiery furnace." (Daniel 3:4-6)

In the story the people are gathered together, and presented with a symbol of their nation, one which they are commanded to worship and revere and out of fear, or out of some concept of unity, or out of patriotism, at the designated time the people fall down and reverence this statue.

All but three young Hebrew men.

Can you picture it? A large crowd have come together at a set place, the mood is festive and jubilant. And now the music begins to play; the period of reverence has begun. Now is the proper time for unveiling the object of reverence for the people, and as one the people stand.

All but one brave young man.

One brave young man who chooses to kneel.

There are many parallels to be drawn between the events in Daniel chapter 3 and what is currently taking place in the United States with Colin Kaepernick, but what stands out is the bravery to go against the grain, the conviction of beliefs, and the willingness to face the consequences for doing what is right.

And yet, Colin Kaepernick is not held in universal high regard as these three Hebrew men.

Unlike the events of Daniel 3, Kaepernick has not been thrown into a literal furnace, but I can assure you he is feeling the heat. Unemployed. In receipt of death threats; and vilified and demonised pretty much everywhere he goes.

My question in this story is why the difference in perception within Christianity between Colin Kaepernick and these Hebrew men?

I understand that some may query Kaepernick's stand as being what God called him (and us) to do but Exodus 23:2 says "Thou shalt not follow a multitude to do evil; neither shalt thou speak in a cause to turn aside after a multitude to wrest justice." Job 8:3 asks us "Doth God pervert justice? Or doth the Almighty pervert righteousness?" Then there is Isaiah 1:17 which says "learn to do well; seek justice, relieve the oppressed, judge the fatherless, plead for the widow."

The call to justice is repeated time and time again throughout the Bible, and with the constant editing and manipulation of the narrative surrounding events in the NFL, it's easy to understand why some veterans may be upset. What is not easy to understand is how anyone could be so upset at the manner of this protest and not even more upset at the fact that a 12-year-old child is shot and killed in less than two seconds of police showing up, and nobody is held accountable. What is not easy to understand is that despite running away, posing no threat to any one, Walter Scott was shot in the back. His execution was caught on video, and yet nobody has been held accountable.

This is the message that Kaepernick is sending out, that is being lost in all the noise: the biblical mandate to ensure that justice is given to all.

The people in Babylon were given the command to worship the idol that King Nebuchadnezzar had erected on that plain, and when I see the events that are taking place, when the loss of human life is not worth as much outrage and anger as perceived disrespect to a piece of cloth draped over a field, it seems to me it is necessary to ask, "Has the flag become our idol on the plain"? Have we become so motivated by fear, or some concept of unity and common identity, that we forget to do what is right? Do we allow strongman leaders in our society, in our work places, or in our very churches to persuade us to ignore the suffering and pain of others because we must remain united? Unity that is built on the exclusion, denigration, and detriment of others within the community is not unity. It is just wrong.

The Old Testament contains call after call, command after command, reminder after reminder to God's chosen people to be just and to give justice; and if we are his church it is just as applicable to us.

You don't have to take a knee during the anthem like Kaepernick. By all means stand. But also stand when it is time to protest injustice. Stand when it's time to demand equality. Stand and be the example of love and justice God has asked us to be.