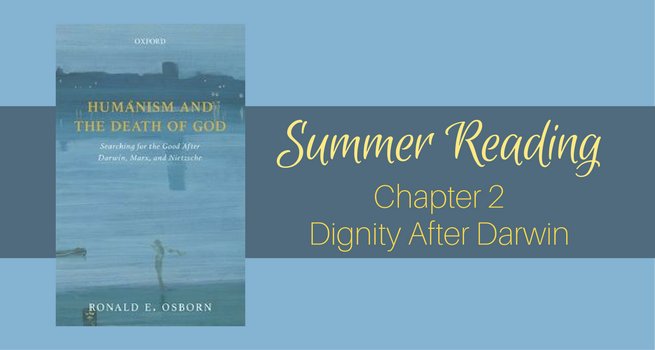 This is the second post in a seven-part series for Spectrum’s 2017 Summer Reading Group. Each post will be drawn from chapters of the book Humanism and the Death of God by Ronald E. Osborn. You can view the reading/posting schedule here.

You can’t say he didn’t see it coming; he did. Irish Bishop George Berkeley (1685-1753), fearing that the physicalist reductionism arising out of the Enlightenment and scientific revolution would, eventually, lead to materialist atheism, was right. It did, and we are living with the results, expressed (as one example) with Carl Sagan’s quote, a bit of inductive inference gone ape: “The Cosmos is all that is or was or ever will be.” (Wonder how he could have been so blasted sure?) Despite the Bishop’s prescience, his esse est percipi move—an attempt to save us from the atheistic materialism by denying the material world—did not do the trick. And so, today, left with the rubble, thinkers such as Ron Osborn bemoan, correctly, “the failure of philosophical naturalism/materialism to answer basic human needs or to sustain a strong sense of human flourishing and the dignity and equality of all persons.”

Yet Osborn’s “solution,” at least in the context of Darwin, does not offer us any better way out, I am afraid.

Do not get me wrong. Osborn is a brilliant writer and thinker, and with great sophistication and nuanced thought, he wrestles with an important question: “Can we have a rationally coherent, morally compelling, and historically sustainable discourse as well as practice of humanistic values and human rights without a ‘thick’ metaphysical or religious framework such as the one provided in the Western tradition for some two millennia by Judeo-Christian sources” (4)? In short, it is that Can-we-be-good-without-God? thing, a pithy but not particularly helpful way to deal with the crucial issue that Osborn tackles.  After all, in a post 9/11 world, believing in God does not obviously make one “good,” and even replacing “God” with “Jesus” hardly solves the problem. I mean, you are more likely to find an African-American at a KKK rally than an atheist.

As the title of his book indicates, Osborn is dealing with this issue in dialogue with Darwin, Marx, and Nietzsche, and yet I contend that there is a substantial, even qualitative difference between Darwin’s relationship to the materialism that Ron decries and that of Marx and Nietzsche. Marx and Nietzsche were simply responding to the materialistic noosphere in which they lived and moved; Darwin, in contrast, helped create that noosphere—a fundamental difference that, I think, makes Osborn’s attempt to “baptize the devil,” no matter how well-intentioned, doomed from the start.

In the chapter titled “Dignity after Darwin,” Osborn addresses the rational results of the Darwinist propaganda coup that has swept the intellectual world with what eventually became known as the Neo-Darwinian Synthesis. A good portion of the chapter is Osborn revealing the horrific moral implications of Darwinism.

For instance, he writes about James Rachels, who argued that after Darwin the idea of human dignity is “the moral effluvium of a discredited metaphysics,” and, therefore, humans are no worthier of special consideration than other animals (24). Taking this idea to its logical conclusion, Australian philosopher, Peter Singer (deemed the father of the Animal Rights movement), had claimed that “on any fair comparison of morally relevant characteristics, like rationality, self-consciousness, awareness, autonomy, pleasure, pain, and so on, the calf, the pig, and the much-derided chicken come out well ahead of the fetus at any stage of pregnancy—while if we make the comparison with a fetus of less than three months old, a fish would show more signs of consciousness.” Singer has argued that, up to three months after a baby was born, parents should have the option for infanticide (he later backed off). After all, a catfish has more of the qualities we associate with a worthy life than does a fetus or even a newborn.

Though he does not address Singer directly, it is conclusions like these, and the battering to human dignity in general (all the inevitable results of Darwin’s theory), that such a compassionate thinker as Osborn confronts. (And, for what it is worth, Osborn, who could be sitting comfortably in some intellectual armchair in the West, is instead living out his Christianity by working in, of all places, Sudan.) If life, morality, and culture are just, he writes, “the outcomes of purely materialistic forces under conditions of natural selection” (29), then the foundation of our ethics becomes more like mush than tablets of stone.

“In a purely Darwinian universe,” he writes, “no statements of value can be made. Ever. Every appeal to beauty, honor, justice, compassion or purpose is excluded by the materialist hypothesis, so there is no normative standard by which any behavior can be judged, whether positively or negatively. Ethical precepts have no intrinsic meaning or claim on human conduct, but are simply additional facts of natural selection to be catalogued alongside strong talons and sharp teeth” (40).

So far, so good. But Osborn has a problem. He knows that honor, justice, beauty, compassion, and purpose exist and as more than just “additional facts of natural selection.” And though he writes that “there is no reason to reject Darwin’s theory outright,” something must be amiss with it because things like love, beauty, justice, and so forth are more than what the theory allows for. Therefore, Osborn reasons, “The problem, we must grasp, lies not in the evolutionism of Darwinian theory but in its naturalism, at least when taken without any epistemological or ontological qualifications or limits” (40).

He also argues: “The fact that there is something rather than nothing, that this something includes not only material objects but also living beings, that some of these living beings possess sentience or consciousness, and that some of these conscious beings possess a self-reflective awareness of their inner lives and an ability to contemplate the meaning of their own existence, means that there is more to our universe than any strictly materialist account, by very definition, can comprehend or explain without doing violence to the phenomena it sets out to describe” (68).

Yes, there is more to our universe than “any strictly materialist account” can account for (another reason why Darwinism is false), even if “the strictly materialist account” is what makes Darwinism Darwinism. The whole point of Darwinism was that, alas, we can now, ideally, explain everything—from horses’ manes to love, justice, beauty—by natural means alone, with no need for the “superstitions” of religious faith.

And here my friend’s Darwin dilemma comes into focus. He writes as if the problem with Darwinian theory is just its naturalism, as if its naturalism—even with “epistemological or ontological qualifications or limits”—is a mere auxiliary to it.  But that is like arguing that if you just eliminated Marx’s views of “class struggle,” Marxism would be fine.  Perhaps to spare himself the calumny that Thomas Nagel faced when he, with his Mind and Cosmos, openly challenged the Neo-Darwinian myth, Osborn never explicitly explains how he intends to deviate from a “strictly materialist account” without adding the supernatural into the mix. There are no degrees to naturalism: naturalism (at least as it is understood by scientific consensus today) is either naturalism or it is—what?—Supernaturalism. And because Osborn is a theist, I assume that is where his nicking and pecking at Darwin’s naturalistic fundamentalism is headed. This is problematic because the moment you get rid of the mindless, purposeless, directionless naturalism of Darwin’s theory, you no longer have naturalism or, in fact, Darwin’s theory.

What is fascinating is that atheist evolutionists see this paradox while theistic evolutionists do not (or will not). Evolutionist Richard Dewitt writes that “if one adds a supernatural involvement into the account of evolution by natural selection, say by allowing a God to meddle in the evolutionary process, then it is no longer natural selection. One is no longer taking natural science and evolutionary theory seriously. In short, taking natural science seriously means that an account of evolutionary development that is importantly influenced by a supernatural being is not an intellectually honest option.”[i]

I could not have said it better myself, though for years I have been trying.

Osborn also references John Polkinghorne, a theistic evolutionist whom I quote in my forthcoming book on evolution as arguing that God created through evolution in order to save the creation from “being overwhelmed by the naked presence of infinite Reality.” Osborn, though, quotes him as referring to the inadequacy of “unaided Darwinism.” Talk about theological newspeak! What, pray tell, is aided Darwinism? It is certainly not Darwinism, so this bit of linguistic subterfuge, in an attempt to expand the scope of the term, does not work.

It cannot. The moral nihilism that arises from Darwin’s theory does so logically and rationally, and all attempts to blunt it do so but by denying the reality of what Darwinism is and must lead to.

Like Nietzsche and Marx, Darwin was impacted by the naturalism that suffused their century. Unlike them, however, Darwin formulated a theory—a “scientific” one, mind you—that sealed the deal in many minds. That is, Darwin made it intellectually acceptable to look around at all the incredible design, the “beauty, honor, justice, compassion or purpose” that screamed “God!” but now allowed people to retort: “Nope, it’s just random mutation and natural selection, and we got the science to back it up, too, thank you.” Marx and Nietzsche simply took the implications of naturalism and ran with them. Darwin, in contrast, if not creating that naturalistic worldview, gave it the imprimatur of “science,” which, according to this age’s mythology, must make it true. In short, Osborn’s attempt to keep Darwinism and to Save the Phenomenon—i.e., the things that give humans dignity—fails.

[i]Richard DeWitt, Worldviews: An Introduction to the History and Philosophy of Science (p. 313, Kindle edition).

Clifford Goldstein is the editor of the Adult Sabbath School Bible Study Guide. In addition to Baptizing the Devil: Evolution & the Seduction of Christianity (to be released this fall by Pacific Press), he has authored 22 books, including God, Gödel, and Grace, Graffiti in the Holy of Holies, and 1844 Made Simple. Goldstein attained his M.A. in Ancient Semitic Languages from Johns Hopkins University in 1992.