The Social Gospel According to the Woman at the Well

The Social Gospel According to the Woman at the Well 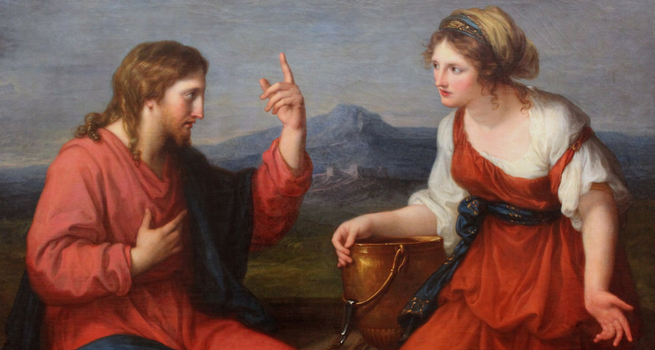 A year ago, I was able to travel with a couple of colleagues to Flint, Michigan, to distribute water in response to the water crisis. I never realized the necessity of water until educating myself about the crisis. The residents of Flint were only allotted one case of water per person every day at the water distribution area at the fire station. Unfortunately, one case of water was not enough for drinking, cooking, bathing, and cleaning the house. From talking to some of the residents, I found that going to the water distribution areas became a daily routine. These individuals would visit the fire station for the same reason: to receive water. This situation reminded me of a familiar story in John 4 about the Samaritan woman.

The Samaritan woman was drawing from the well during the hottest time of the day. Women normally collected water around dawn and dusk when it was much cooler. Because the Samaritan woman had a reputation, she did not want to be ridiculed by the women in her neighborhood whenever she drew from the well. She did not want to be greeted by fake smiles and overhear the other women gossiping about her.

Thus, the Samaritan woman risked her comfort by drawing from the well during the hottest time of the day. I can only imagine how she must have felt walking from her home with her water jar and having to draw from the well in the unbearable heat. She was undoubtedly hot and bothered as the result of being marginalized by the society she was living in. Nobody was able to understand her painful past or even took the time to have a conversation with her.

All of us today have had an experience of feeling hot and bothered by the world we live in. Some of us are treated poorly by others who think we do not deserve to draw from the same well. We all have an unquenchable thirst for justice, acceptance, and equality. Nobody wants to be treated like second-class citizens.

The Samaritan woman could relate to this feeling which is why she was stunned when a Jew named Jesus asked her for some water and, in return, introduced the Living Water to her. It was that encounter that made a great difference in the Samaritan woman’s life. She realized that she had been drawing from the wrong things in her life when she met Jesus. After her encounter with Jesus, her thirst for acceptance was quenched, and she had to share with others. She was able to draw many people to Jesus in spite of her past. By doing so, she became a walking oasis to her community.

God has called us, the Church, to be oases in a world that is hot and bothered with the injustices happening around us. The prophetic mandate in Isaiah 61:1-2 tells us that we are called to provide a safe haven for those who are marginalized, disenfranchised, and persecuted.

Now is the time to stop using prophecy as an excuse for not advocating for those who are silent. We are called to speak on behalf of those who are unable to speak for themselves. We should be open to participating in marches and community dialogues. We should be able to educate ourselves with issues that impact our local communities such as immigration, food deserts, education, police brutality, healthcare, and domestic violence.

We must never underestimate the power of presence in times of crisis. We may not know the full context of the biography of the woman at the well, but what we can learn from this story is our responsibility for being a church that is open to everyone regardless of race, gender, sexual orientation, or life experiences.

Darnisha Thomas is serving as the pastor for Student Ministries and Volunteer Engagement at New Hope Adventist Church in Fulton, Maryland. She also blogs on www.nishaisnaturallyadorned.com where she frequently discusses practical theology and life with a touch of pink.