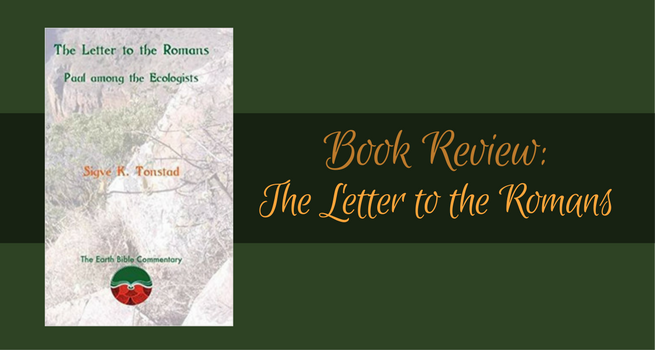 A review of Sigve K. Tonstad’s The Letter to the Romans: Paul among the Ecologists. The Earth Bible Commentary #7 (Sheffield Phoenix Press, 2016).

From the title and this work’s presence in the Earth Bible Commentary Series, a reader might conclude that this is a narrow study of one small aspect of Paul’s message in the letter to the Romans. This would be a serious mistake, for nothing could be further from the truth. This commentary is a magisterial work on the entire letter that not only embraces virtually all the issues in Pauline studies but also enters into fruitful dialogue with most of the major interpreters of Romans in both the past and the present. No one who is serious about the study of Romans can ignore this commentary.

In his preface, Tonstad says that he writes with three goals. First, he wishes to write a genuine commentary respectful of Paul’s concerns and reflecting his purpose. Second, he writes for those already interested in Paul, and third, he goes in search of readers who are interested in ecology but who have little or no prior knowledge of Paul. He has succeeded on all three counts.

First, we will review the basic theological stance of the commentary and then move to the ecological significance. Tonstad is in line with scholars such as J. Christiaan Beker and J. Louis Martyn who emphasize apocalyptic and revelation in Paul. He also agrees with scholars such as Richard Hays, Douglas Campbell, and many others, who hold that the phrase “faith of Christ” does not mean “faith in Christ” but rather “the faithfulness of Christ.” For Tonstad, righteousness by faith refers to God’s work of “right-making” through Jesus Christ’s faithfulness. This “right-making” should be understood in participatory rather than legal terms, and it includes God’s work of transforming the whole creation, whether human or non-human.

Why does creation need “right-making”? According to Tonstad, the creation has been deceived into misunderstanding God and God’s character. As in Habakkuk, which Paul quotes in chapter one, the question is about God’s faithfulness. The misrepresentation and misperception of God’s character is at the root of sin. Sinners are not merely villains, but the are victims of deceit (p. 217), which is not only a personal problem but a cosmic one. This misunderstanding leaves humans helpless, hopeless, violent, and in need of revelation that sets things right and brings hope and compassion. Paul’s greatest concern is a revelation of God (p. 9). God is both the source and the subject of this revelation that comes through the faithfulness of Jesus Christ. The revelation of God’s faithfulness structures and empowers human faithfulness (p. 68) although human faithfulness can never match God’s faithfulness. The “obedience of faith” of which Paul speaks at the beginning and end of his letter is obedience grounded in divine faithfulness.

Paul’s presentation of this theology, however, is not without a specific historical background. According to Tonstad, counter-missionaries, who are not a part of the Romans house churches, have come in to Rome and in a way very similar to the opponents in Galatians and are demanding circumcision, which is a denial of God’s right-making inclusiveness.

For Tonstad, the theological climax of Romans comes in 15:12 where Paul quotes Isaiah by saying: “The root of Jesse shall come, the one who rises to rule the Gentiles; in him the Gentiles shall hope.” The final chapter of Tonstad’s work is a masterful exegesis of the interplay between Isaiah’s message and Paul’s message that concludes by showing how Christ’s faithfulness reveals God’s true character. (One of the great values throughout this commentary is its careful and insightful presentation of Paul’s use of the Old Testament.) The result is that Christ sings God’s praise among the Gentiles, Gentiles sing God’s praise with God’s people, and all, both Jew and Gentiles, sing God’s praise. Paul’s message moves from misperception and hopelessness to hope (p. 364). This is Tonstad’s “widescreen” view of Romans.

But how does this fit with ecology? Tonstad’s view of ecology is also “widescreen.” For him ecology is fundamentally the science of relationships (p. 293) and in biblical perspective, from Genesis to Romans, becomes the eloquent and evocative handmaid of theology (p. 297). The commentary devotes an entire chapter to Romans 8:22, where Paul turns over the pulpit to nature (p. 238). The non-human creation groans (Romans 8:22) along with humans (verse 23) and the Spirit (verse 26). The non-human creation takes a redemptive interest in the human plight, eager to see human suffering give way to relief and future glory (p. 247). When the creation was cursed in Genesis after the Fall, this was not an act of God’s cursing. God simply acknowledged how human sinfulness would now exploit the creation and dominate it rather than care for it compassionately. The non-human and human creation are bonded together in the same material world. As Tonstad says:

Hope is not that the immortal soul will be delivered from the prison of the body or even for the soul to be united with the body. Humans and non-humans are earthlings and materially constituted, and the believer’s hope is for “the redemption of our body” (8:23).

When Tonstad turns to the paraenetic section of Romans (12:1-15:21), he notes the flashbacks to Genesis and enters into an extended discussion of the relevance of three elements in Genesis for ecological issues today. These are seeds, land, and animals. In a poignant and empathetic way, Tonstad shows how the divine compassion Paul reveals should lead us away from our insensitive exploitation in all three of these areas. (In the preface, Tonstad shares that he spent time herding sheep as a boy, and his love for both land and animal shows through in this discussion.)

Whether the reader fully agrees with Tonstad’s widescreen view of Romans and of ecology, he or she cannot help but be stimulated, challenged, intrigued, inspired, and blessed by engaging with him in this monumental work. He is an excellent writer whose prose often approaches the poetic. One feature that makes the work much easier to understand is a series of boxes where Tonstad simplifies and summarizes his basic arguments. Even when the argument may be somewhat complicated, the boxes are extremely helpful for the reader.

Another value of this commentary is its engagement with other commentators. Tonstad devotes chapter two to a dialogue with five of Romans’ most famous readers of the past: Origen, Augustine, Luther, Wesley, and Barth. He concludes that Wesley is the only one to understand the larger ecological significance of Romans.

There are some unique features of Tonstad’s interpretation that present intriguing possibilities though not all will be convinced. Tonstad sees Romans 1:18-32, the section about the revelation of God’s wrath, not as Paul’s thought but as that of his opponents. In these verses, he simply outlines their view in order to refute it. In an appendix on God’s wrath, Tonstad discusses the theological significance of this view.

Another intriguing interpretation comes in Romans 7. Scholars have long argued over whether the frustration Paul expresses is autobiographical or not. Tonstad believes that it is not Paul but Eve who speaks in this section. In his view, this shifts the passage away from the human-centered, individualistic, introspective reading and makes it more “extrospective” (p. 219) although he admits that even though the focus is on Eve it does not exclude Paul.

It is hard to fault anything in this incredibly helpful and creative work, but I do hesitantly share two disappointments. The first has to do with chapter 14, the debate between the “weak” and “strong” over food and days. After presenting a good summary of various views on the historical situation behind this chapter, Tonstad uses the chapter as a springboard to discuss our present-day need to follow a plant-based diet and have a Sabbath rest. Both discussions are persuasively and sensitively presented. They do not, however, speak to Paul’s real concern in this chapter. Paul does not spend much time defining the specifics of food and days because he seems anxious to move on to his real concern, which is how people relate to each other when opinions and practices differ. Although Tonstad gives a nod to Paul’s concern on page 337 when he says that it seems clear that “Paul seeks to ensure unity in diversity whether the diversity in question relates of opinions or practice,” he never fleshes out Paul’s ethically relevant arguments. Instead, on page 354 he says, (emphasis mine)

The distinction between “the weak” and “the strong”, if relevant at all, will need to be redefined in ways that are ethically and ecologically meaningful with respect to present reality.

Paul’s message is not about food or days (these specifics could be replaced by any number of issues) but about people and their ability to relate positively with each other in Christ even amid their differences. At a time when a lack of civility in both religious and political discourse seems to make welcoming others who are different or think differently a rare commodity, it seems that a discussion of Paul’s real concerns and the principles involving interpersonal relationships in Romans 14 would be highly relevant.

My other disappointment is Tonstad’s omission of any major treatment of most of Romans 16, the list of names to whom Paul sends greetings and those from whom he sends greetings to Rome. Although Tonstad refers to the original readers in chapter three on the human ecology of Romans and includes a creative liturgy between Phoebe and the Romans congregation at the end of chapter twelve, there is no detailed treatment of these names. Yet, this list of names is hardly an irrelevant appendage to the letter. In many ways, it is where the rubber hits the road. Paul’s concern for the inclusive “all” throughout Romans finds expression in these diverse people who make up the churches in Rome and Corinth. I am disappointed that Tonstad does not treat them more fully.

These “disappointments” are very minor, however, in light of the work as a whole. I strongly recommend that any reader who cares about Romans, ecology, or both engage Tonstad’s creative, intriguing, and challenging commentary.

John Brunt is retired after fifty years of educational and pastoral ministry. In retirement he serves as pastor of the Edmonds Adventist Church in Edmonds, Washington.