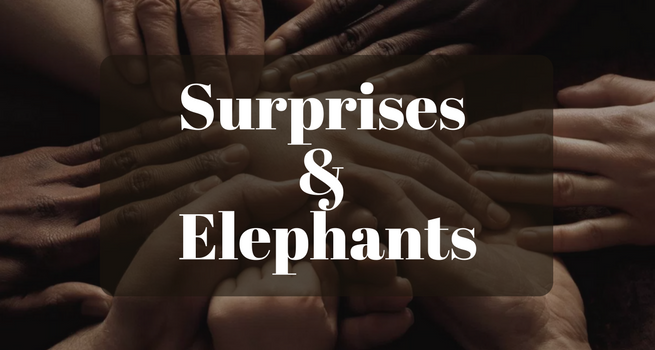 Fragments and Impressions from the London Unity Talks

What’s the point? Does the center care about the margins?

Weather too nice to be inside for hours.

Must remember to take notebook for jottings.

Barry Oliver quotes Ellen White: of the then GC president Butler she writes, "one man’s mind is not enough," "a sick man’s mind has had control." Ooof! Butler was manipulating what came before the GC session. Ellen W. again: People on the ground are to "use their judgment" to further the mission. The prophet was a pragmatist (interesting idea in itself) driven by mission. She called for decentralization of decision-making and spreading of responsibility in church work. (Seems very wise). Unity in diversity. Central organization is advisory not executive. And EGW succeeded in settling the church, more or less. (But can this apply to 20 million Adventist individualists?)

George Knight says that church top guys misunderstand Matt. 18 and try to "bind’ members’ " minds for administrative ease. Flat contradiction to EGW who says there must be "no forcing of minds." Individual conscience must not be compromised—a top value of EGW. Forcing minds produces division not unity. Unions are sovereign but senior leaders worry that GC might be destabilized. "GC—the highest authority under God" often misquoted, badly misunderstood. (Wilfully?) San Antonio ordination debate saw the (cynical?) manipulation of information made available to delegates. TOSC (very expensive)—conclusions fatally ignored. And many delegates could not be bothered to read (admittedly dense) material. Voted en bloc. (Adventist populism!)

(This is beginning to disturb me. I am shocked but not surprised. This is detailed, compelling evidence. Can’t turn a blind eye to it. Need to breathe! Step out into the hotel foyer among the hoi-polloi aka "the world" or a moment. Our mission is in the foyer!)

Rolf Pohler: Ellen W. again: "circumstances change the relation of things." She says that regarding the GC as "the voice of God" is "almost a blasphemy." (Ouch! Must check that). "Do not surrender your judgment to that of any other man." Pohler says Ellen W. is often formative not normative.(Yes, of course. She says the same.) Old jewels must be framed in new settings. Rolf’s call is for ‘conscientious non-conformity’ (like conscientious objection). (Rolf gave the idea a name, Ellen had already given it substance.

Lowell Cooper: (I have never been a policy wonk. I disliked reading it, making it, sometimes applying it. Thought you needed to be a little touched by some syndrome or other to actually enjoy it. Not optimistic.) So, surprising that Lowell Cooper made policy so riveting. Stellar, intelligent performance. The church frequently makes exceptions to policy when it supports the mission of the church—remuneration, conditions in local employment law, special affinity groups (e.g., the church in China). So why not when it concerns ordination? (Good question!) Mission should always drive policy not vice-versa. Policy development is more important than policy enforcement. (Now that is interesting). Policy needs to be dynamic when the world (in the foyer) is changing by the minute. Need for administrations to be agile, imaginative…on ordination and elsewhere…for the Gospel’s sake. (Worth coming just to hear this).

(End of day one. Need to recalibrate. Need to settle. Remarkably sleep comes. Many surprises already!)

Friday: Surprises — No Let Up

Wendy Jackson—first up. The overall sense of EGW’s counsel is that we don’t need to think uniformly; we do need to work harmoniously. That means teachableness, mutual availability. All of us. Church unity is the responsibility of every member. Unity is daily. Unity is local. The tendency to categorize, stereotype others leads to disunity. (Yes! Small rebuke to self!) Actually, simple nurturing kindness creates unity. (Kindness—easy really!?)

Roy Adams: John 17 is about unity? Right? Wrong! Not only that anyway. It is also about "glory"—bringing "glory"/respect/value to one another. It is about protection. Pray then for the protection of the church against destructive forces. It is also about revelation/mission. Jesus lamented the fact that he had so few workers to reap the harvest. He was not about to halve the workforce by excluding women. (That hits home! Memo to self: or excluding people I do not much like!) John’s gospel is about unity as well, of course. Unity cannot be manufactured, administered, enforced. It has to be nurtured. Takes time. And lots of gentle, loving effort. And yet, paradoxically, unity is somehow effortless, organic. Not sameness but connectedness. And then a further surprise: "the church’s failure to use all willing talents is ecclesiological malpractice." (Sharp intake of breath in the room!)

Panel of speakers produces a bag of all-sorts:

John Brunt: (evening talk to wearying participants, difficult task). Early church is our model. Koinonia—mutual availability. Would have been easy to divide over cash, junk food, sexuality. But Paul sought community at cost of considerable hardship to himself. Jerusalem Council. Paul vs. Peter. Diversity vs. uniformity. Paul did not try to control everyone’s behavior. Paul: welcome each other "with open arms." Can narrow conservatives and smug liberals pull that off? If we cannot, we’re finished; we’ve nothing to say. Joy is the test of healthy religion. (Yes! Yes!) "Hear, O Israel, the LORD our God is one." (Amen).

(And so to bed. Can’t sleep. My resources for coping with surprises are stretched!)

Sabbath – (Some Rest from Surprises?)

Olive Hemmings: (I’m tired, Olive, you had better be good!) "Righteous" means just. Freedom from oppressive structures. "Then shall the sanctuary be cleansed" literally "then shall the sanctuary receive justice." (Key point I am sure—haven’t quite fathomed it yet . . . be a place of justice?) Early church incredibly diverse—all stripes. Paul insists we are all equal Jew/Greek, slave/free, male/female. Paul makes this huge leap of imagination. But Peter intimidated by pro-circumcision party. Paul opposed use of coercion of conscience to bring unity. Paul patiently seeks spiritual maturity not imposed conformity. Paul does not bow to the loudest voice. Allows for freedom of conscience on idol meat. He knows that on culturally complex issues you can’t be dogmatic. Within dominant structures, there is often a whiff of fear. Paul refuses to motivate by fear. Where Jesus is there is no climate of fear.  Grow members not just membership! (Olive has kept me very awake. Finely crafted, passionate piece. I do not do justice to it here—concentration not best. Will read it (all of them, actually) again. Online.

Reinder Bruinsma: Adventists have always been interested in promotion of religious liberty. IRLA (Google it). Ironic: we seek religious freedom for ourselves when facing outward; slow to grant it when facing inward. But how much freedom can a religious organization permit? Can you codify "real Adventism"? (If we continue to codify everything, then we may only have the GC Executive left, and even they . . . !) Policy simply can’t be made to have equal importance to doctrine. (New GC policy of close screening of scholars is an uncomfortable reminder to Europeans—like me of recent expressions of totalitarianism. Burning of the books—frightening). A climate of fear kills the spirit: (witness the veiled threats issued to some due to participate in this conference). Ironic that 500 years after Luther we witness an excluding tendency, an inquisitorial spirit. Adventist presidential system reflects American presidential system—to its detriment. Church leadership style often mimics local cultural style—inevitable or regrettable?

Ray Roennfeldt: (you’ve drawn the short straw. Last lecture of conference—surprisingly hot afternoon. I’ll give you the best attention I’ve got, Ray). "I have enjoyed working with women in authority over me." (Very honest. Like his tone). In Genesis, God creates spaces on days 1, 2, 3; he fills them with richness on days 4, 5, 6. So the male was created first, with potential—the female fulfilled it. (Mmm. I shall need convincing on that one, Ray. Interesting though.) Hagar, Ruth, Gospels—God is on the side of the marginal. Not the powerful ones. Really understanding the Bible is not for the faint-hearted. Challenges just as it comforts. Wesleyan Quadrilateral. Scripture, experience, reason, tradition. (Read the lecture online—very helpful). Early church opting for non-circumcision shows that Jesus’ new covenant applies beyond males. God is vitally interested in justice and equality. Are we? They are at the heart of righteousness by faith, Sabbath, second advent—in fact the whole Adventist package. Not a side issue.

Worship was not neglected. Gary Patterson did the honors. Not just all head stuff. Tying up the ten commandments "package" was a great stunt . . . you had to be there! Liked Wim’s moments of silence.

I am proud of, and grateful for, my people, my community of faith.

Niagara of loyalty to the church.

The conversation was extremely well-informed and there was no academic point-scoring stuff.

Actually, not just one-sided. There was friendly dissonance. It can be done.

Complete lack of cynicism. It would have been easy for anger and disappointment to degenerate from sad to mad. But no! No negativity. Especially proud of everyone for that.

At Home Now and Here Come the Elephants

I need time—a lot—to absorb all this, reflect on its implications. Read the papers. I haven’t done any of them justice here—just fragments. Will they get more attention than TOSC papers?

So . . . what about the elephants? Elephants in the conference room, that is.

Important to be self-critical. That’s how humans mature (churches, too). It was an excellent three days. Proud of the organizers, speakers, contributors from the audience, etc. For all the excellence (I don’t use the word lightly) of this event, must ask where were the weak spots, the flaws you just can’t identify close-up? Particularly indebted here to hindsight!

Surprises? I was surprised by joy (to borrow from C.S. Lewis).

Well worth staring at that awful kitsch at the bottom of my bed for three days.

Michael Pearson is a retired ethicist living in the UK.