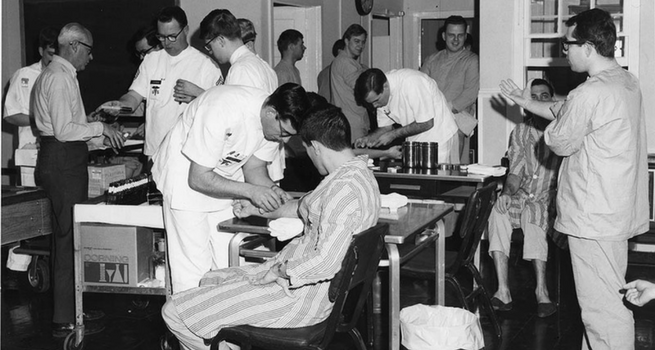 Question: You have just produced a movie called Operation Whitecoat about a U.S. Army program that young Seventh-day Adventist men were part of between 1954 and 1973. Can you tell us a little bit more about the Whitecoats?

Answer: During the Cold War, more than 2,300 non-combatant, conscientious objectors from the Seventh-day Adventist Church volunteered to serve their country by participating in U.S. Army medical experiments focused on developing defensive medical countermeasures against the Soviet Union’s bio-warfare capabilities.

These volunteers were exposed to experimental vaccines and infectious pathogens. Operation Whitecoat tells the story of these patriots―their commitment to both religious principles and desire to serve in America’s defense, their courage to participate in these tests, and their contributions that went far beyond Army biodefense.

The vaccines and therapeutics developed, the knowledge gained about naturally-occurring infectious diseases, and the laboratory safety procedures developed during Operation Whitecoat have saved untold numbers of lives in the U. S. and around the world.

The film is being screened at the General Conference, Loma Linda, the Frederick Seventh-day Adventist Church, Fort Detrick where the Whitecoat program was based, and more. What has been the reaction to the film so far?

Today [June 13], we had more than 200 people attend the screening at the headquarters of the U. S. Food and Drug Administration, including the Chief Scientist and other top leaders.

The film premiered on June 10 when 619 people, including 41 former Whitecoat volunteers, attended a screening at the Loma Linda University Church.

I don’t think it is an exaggeration to say the film has received “rave reviews.” The positive feedback we have received has been primarily focused on the “untold story” aspect of the film.

Few people, including those currently working in biodefense and pandemic preparedness, fully appreciate the Whitecoats' contributions―contributions to U. S. national security and global public health that will continue for decades to come.

For instance, 13 important vaccines in use today, including the vaccine currently being used to fight the Yellow Fever epidemics in Brazil and several African nations, were developed during Operation Whitecoat.

One of my favorite comments came from a senior leader in the North American Division: “I was at first a little disappointed in its short length, but that actually makes it a perfect length to show and then follow up with discussion.”

While serving as a department chairman and professor at the National War College, I greatly enjoyed the graduate seminars―providing a short lecture or film clip to provide historical context and frame the group discussion that would follow. Operation Whitecoat could be used in churches throughout the North American Division to facilitate a wide range of discussions—from military service as a non-combatant, to community, national and international service, and various issues of ethics in modern life.

What have you heard from former soldiers who were a part of the Whitecoats?

They have been very appreciative that their story has finally been told in a historically-accurate documentary film—a film that talks about their contributions that have gone far beyond biodefense for the U. S. military, including their role in NASA’s Apollo space program and the Camp David Peace Accord between Israel and Egypt facilitated by President Jimmy Carter.

Why did the U.S. Army want to use Adventist soldiers for its experiments? I have been told it was because the non-drinking, non-smoking lifestyle they followed made them better test subjects. How did the Army find out about the Adventist cohort and the possibility of asking them to serve in the Whitecoats rather than serving as soldiers fighting in Vietnam and elsewhere?

In the film, Chaplain Dick Stenbakken (the former Director/Endorser of Adventist Chaplaincy Ministries) explains that the U. S. Army approached the General Conference leadership in 1954.

The U. S. Army needed test subjects for the biodefense program, and the Seventh-day Adventist draftees were seen as excellent candidates.  They were non-combatants who primarily served as medics.  The Army came to the leaders of the GC and suggested that instead of saving one life at a time (as Desmond Doss did during the battle on Okinawa in World War II) the young Adventist soldiers could serve in a manner that would potentially save many lives.

What got you interested in the Whitecoats and the possibility of telling the story in a film? Are you an Adventist or do you have Adventist connections?

I have been working in the biodefense field since 1994 and had known a few details about the Whitecoats since 1998—but very little.  All I knew was that some conscientious objectors had volunteered to serve as human test subjects in biodefense tests at Ft. Detrick, Maryland.

I have been making documentary films since 2009 (Faster Vaccines, Wounded Warrior Resilience, and If Not Me, Then Who). In the spring of 2015, a colleague who works at the U. S. Department of Health and Human Services suggested I make a film about the Whitecoats.  Once I began my initial research, I became intrigued with the story.

I am not an Adventist. In fact, I knew very little about the Adventist Church when I began this project.

What was the most surprising thing you learned about the Whitecoat program while making the film?

Without question, the most surprising aspect of the program was the rigid enforcement of ethical standards.

I had known about several instances of egregious ethical abuses in human subjects tests conducted by the U. S. government during this same time frame. For instance, the U. S. Public Health Service withholding treatment to syphilis patients; the CIA’s MKULTRA program that gave LSD and other hallucinogens to unsuspecting civilians; and the Atomic Energy Commission feeding children in state institutions breakfast cereals laced with radioactive isotopes are well-documented cases of flagrantly bad ethical research.

However, the ethical standards used during the 19 years of Operation Whitecoat  were above reproach.  Dr. Jonathan Moreno, a professor of medical ethics at the University of Pennsylvania, calls Operation Whitecoat the “gold standard of ethical human testing in medical research.”

Did you run into any challenges, like some of the relevant material still being classified? Or people instrumental in the program no longer alive to interview? Or anything else?

My primary challenge was taking hours and hours of Whitecoat interviews and distilling them down to a short film that would cover the various and diverse aspects of the 19-year program. I got to travel around the country meeting these guys, and I have been so impressed by them. The final film is 37 minutes long.

My original idea was to spend five months making a 10 or 12-minute film. But that turned into 20 months as I soon saw that I wouldn’t be able to tell the story in 12 minutes.

My father was in the Whitecoats toward the end of the program. He says that he never got sick and later learned that he was part of a control group so was never exposed to dangerous substances. How many soldiers did get sick or experience health problems then or later as a result of the program?

Many of the Whitecoats I interviewed did not get sick.  As explained in the film, some were given very low doses of infectious pathogens. If no one got sick, the next group would receive slightly higher doses. This would continue until 80 percent became infected. This provided the information required to begin testing the vaccines. Once the “infectious dose” was determined, Whitecoats could be given an experimental vaccine and then exposed to the pathogen to see if the vaccine was effective.

No Whitecoats died during or as a result of their participation in the program. One Whitecoat was medically retired due to his reaction to a toxin exposure. In 2005, a survey of 522 Whitecoats showed no signs of adverse effects from participation in Operation Whitecoat.

Where else do you anticipate the film will be screened?

We are exploring various options for Adventist organizations to license the film.  This would allow them to show it to various audiences in churches, schools, and other institutions.

I believe you are selling the film on DVD. How many people do you estimate will buy it? How are you marketing it?

In order to recover our substantial investment in this 20-month project, we are selling DVDs for $19.95.  We also offer internet streaming via VIMEO for $12.95.  You can order it here: http://operationwhitecoatmovie.com

How was the film funded?

I didn’t have a penny of funding. It was entirely self-funded. My initial plan was to keep costs under $10,000, but that was pretty unrealistic, particularly when a five-month project turned into 20 months. (The 20-minute film, Wounded Warriors' Resilience, that I made in 2011 cost $100,000 in direct costs—my director and I charged nothing for our time.)

You have decades of military experience. Do you believe that a program similar to the Whitecoats is possible today? If so, how would it be different or the same?

All medical countermeasures (vaccines, therapeutics and medical devices) used by the U. S. military to protect personnel against man-made or naturally-occurring diseases must be approved by the FDA. The tests that the Whitecoats participated in for vaccines and therapeutics (drugs one takes after becoming ill) are similar to those used by the FDA today.

The truly unique aspect of Operation Whitecoat was the challenge tests. These were the tests that infected the Whitecoats with infectious pathogens and exposed them to a toxin called SEB.  It is not likely that the U. S. military would use human subjects for biodefense-related challenge studies today.

For more about the film, see http://operationwhitecoatmovie.com. Randall Larsen has made several short documentary films, including one about American soldiers who were wounded in Iraq and Afghanistan and one about women pilots in World War II. He serves as the National Security Advisor at the Johns Hopkins Center for Health Security and is a member of the Council on Foreign Relations. He has served in a number of executive positions in national and homeland security. He retired from active duty military service in 2000, after 32 years in both the Army and the Air Force, including flying 400 combat missions in Vietnam.