Free Will or Determinism?

Free Will or Determinism? 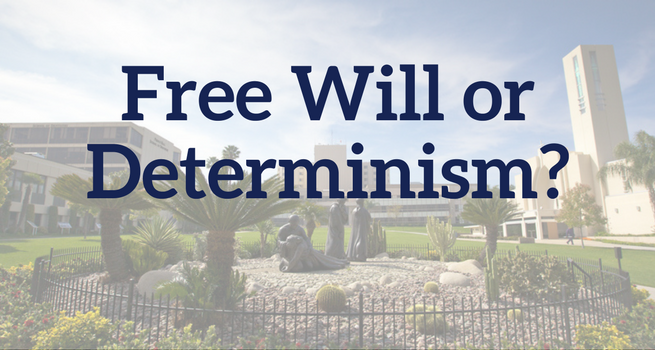 Does physical law entail that humans are no more in charge of themselves than machines? Are we self-deceived if we imagine that our choices make a difference?

On this past Friday and Sabbath, May 19-20, fourteen scientists, theologians, and philosophers gathered at Loma Linda University to consider the most challenging of all science-and-religion questions. Adventists have been preoccupied with how to read Genesis after geology and Darwinism, but no threat to human significance matches the growing sense among biologists that human mental states may have only apparent influence. All of the causal power, it is thought, may lie beneath the surface of experience, at the level of “selfish” genes and, ultimately, of sub-atomic particles. But if human beings are wholly determined, despite what they think, by micro-forces entirely outside of their control, how can it make sense to speak of the spiritual life or even of morality itself?

The conference theme was “What’s with Free Will? Ethics and Religion after Neuroscience.”  James Walters of Loma Linda University, along with Philip Clayton, a philosopher-theologian from the nearby Claremont School of Theology, had long dreamed of the event and had worked together in the planning. Participants came with papers stemming not only from neuroscience but also from such domains as social science, psychiatry, and theology. All presenters addressed the issues from the standpoint of Christian conviction that humans do have freedom to choose and make a difference, at least to some degree. None of them, however, disputed the deepening conviction that contemporary science casts doubt upon, and in any case narrows the scope of, the freedom available to human agents. The question was how, in light of the scientific evidence, to uphold (some degree of) free will as a genuine reality.

A striking feature of the conference was the honesty, fast pace, and inclusivity of the conversation. No one tried to resolve the problem by dismissing the relevance of science. As chief facilitator, Clayton enforced the ground rules with a firm hand—and much appreciated twinkling eye: this was serious business, and it would also be enjoyable. Presenters summarized their claims in 15 minutes; fellow presenters, seated around a table, asked their questions and made their comments for the next 15 to 20 minutes; then, from chairs arranged in a circle around the table, audience members (anyone could attend) had 10 minutes or so to chime in. With no pressure toward uniformity in play, and an overall atmosphere of geniality, opinion ranged across a wide band of conviction. The conference did not, however, evoke comment you could call fundamentalist. The debate concerning science and “free will” seems not yet to have achieved such resonance within traditional Adventism as to draw in the Church’s most conservative wing.

Two guests, both astonishingly prolific scholars, gave “plenary” addresses held in a large amphitheater, the first on Friday evening and next on Sabbath afternoon. Clayton was one of these, and he spoke on “Science, Ethics and Free Will: Why Neuroscience Doesn’t Ground Freedom, and What We Might Choose to Do about It.” He argued that if you attend to “emergent” mental complexity in nature, and not just to the micro-forces at work in brain activity, you can see that physical reality itself has brought into being a real human capacity to makes choices that affect the world. The experience of this capacity is not a complete illusion.  Still, he insisted, freedom in its fullest sense requires a (chosen) connection with the ground of all of being, namely, God.

The other guest was Thomas Oord, a much-published professor at Northwest Nazarene University in Idaho. In his address on Sabbath afternoon, Oord argued for “Genuine (but Limited) Freedom for Creatures and for a God of Love.” He appealed to common sense, or what he called “experiential non-negotiables” such as the assumptions we make in raising children, as a basis for believing in limited free will for human beings. He also explored implications of limited free will for Christian understanding of a God defined by love. Such a God gives freedom but cannot withdraw it. Divine power cannot, for that reason, be absolute, nor can divine knowledge about the future be entirely exhaustive. By turning attention to these matters, Oord linked the Christian conviction of (limited) free will to the movement, often called “open theism,” with which Adventist theologian Richard Rice is also linked. God is a divine persuader, not a divine enforcer; God’s way with the world and its creatures sustains, not overrides, (limited) human freedom.

Oord’s address was the last at the conference, and afterward, the other presenters were pulled into a down-front row. Then Clayton stepped forward, again with the twinkle, and now also with a smart-phone timer. What followed was not quite a panel “discussion,” but the fast pace of conversation did here reach its amiable peak. Every responder had two minutes. Clayton expected down-to-the-second compliance and voiced delighted appreciation when a speaker’s last syllable landed on the last available second. Reservations about Oord’s remarks came to the fore and so did wide agreement with them. It was clear, as the conference ended, that there was overall consensus on the importance and direction of the entire conversation.

The planners will produce an edited volume with revised drafts of all papers. Aside from the two guests, presenters, in order of their appearance, were these: Charles Scriven, Calvin Thomsen, Kendal Boyd, David Larson, David Wilbur (by way of a reader who assisted in his absence), Mark Ard, Marlene Ferreras, Zane Yi, Rick Rice, Fritz Guy, Gerald Winslow, and Jim Walters.