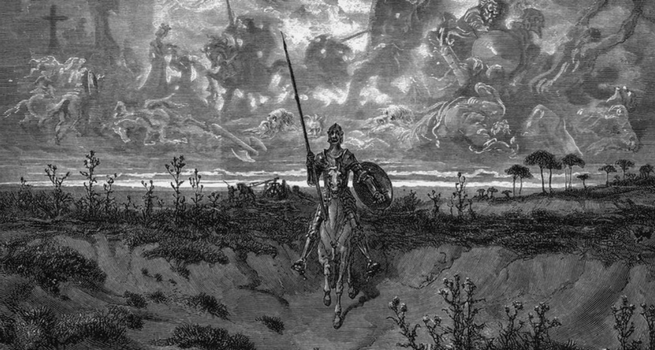 American literary critic and Sterling Professor of Humanities at Yale University, Harold Bloom, states that Cervantes’s Don Quixote—the first modern novel—remains the finest. He argues that only Shakespeare comes close to Cervantes' genius and together are the central Western authors, at least since Dante. No writer since has matched them, not Tolstoy, Goethe, Dickens, Proust, or Joyce. Where then does Don Quixote’s genius reside? According to Mexican cultural analyst and writer Carlos Fuentes: in the fact that, in contrast to previous cavalry novels where characters were fixed, homogeneous and predictable, Quixote introduces a new understanding of reality. There are three key characteristics. First, the relation between reality and dream is more circular and interactive than antithetical and divergent. Second, the primary and more determinant reality in life is that which lies deep inside us. Third, events and characters are in continuous movement, structurally open to the future.

Don Quixote is a middle-aged gentleman from the region of La Mancha in central Spain. Obsessed with the chivalrous ideals contained in books he has read, he decides to take up his lance and sword to defend the helpless and destroy the wicked. After a first failed adventure, he sets out on a second one with a somewhat befuddled laborer named Sancho Panza, whom he has persuaded to accompany him as his faithful squire. In return for Sancho’s services, Don Quixote promises to make Sancho the wealthy governor of an island. On his horse, Rocinante, Quixote rides the roads of Spain in search of glory and grand adventure. He gives up food, shelter, and comfort, all in the name of a peasant woman, Dulcinea del Toboso, whom he envisions as a princess. On this second expedition, Don Quixote becomes more of a bandit than savior, stealing from and hurting baffled and justifiably angry citizens while acting out against what he perceives as threats to his knighthood or to the world. The story of Don Quixote’s deeds includes the stories of those he meets on his journey. For instance, he witnesses the funeral of a student who dies as a result of his love for a disdainful lady turned shepherdess. He frees a wicked and devious galley slave, Gines de Pasamonte, and unwittingly reunites two bereaved couples, Cardenio and Lucinda, and Ferdinand and Dorothea. Torn apart by Ferdinand’s treachery, the four lovers finally come together at an inn where Don Quixote sleeps, dreaming that he is battling a giant. Sancho stands by Don Quixote, often bearing the brunt of the punishments that arise from Quixote’s behavior. Along the way, the simple Sancho plays the straight man to Don Quixote, trying his best to correct his master’s outlandish fantasies. Two of Don Quixote’s friends, the priest and the barber, come to drag him home. Believing that he is under the force of an enchantment, he accompanies them, thus ending his second expedition and Part One of the novel.

In the Part Two of the novel, everywhere Don Quixote goes, his reputation—gleaned by others from both the real and the false versions of the story—precedes him. As the two embark on their journey, Sancho lies to Don Quixote, telling him that an evil enchanter has transformed Dulcinea into a peasant girl. Undoing this enchantment, in which even Sancho comes to believe, becomes Don Quixote’s chief goal. Don Quixote meets a Duke and Duchess who conspire to play tricks on him. They make a servant dress up as Merlin, for example, and tell Don Quixote that Dulcinea’s enchantment—which they know to be a hoax—can be undone only if Sancho whips himself 3,300 times on his naked backside. Under the watch of the Duke and Duchess, Don Quixote and Sancho undertake several adventures. They set out on a flying wooden horse, hoping to slay a giant who has turned a princess and her lover into metal figurines and bearded the princess’s female servants.

During his stay with the Duke, Sancho becomes governor of a fictitious isle. He rules for ten days until he is wounded in an onslaught the Duke and Duchess sponsor for their entertainment. Sancho reasons that it is better to be a happy laborer than a miserable governor. A young maid at the Duchess’s home falls in love with Don Quixote, but he remains a staunch worshiper of Dulcinea. Their never-consummated affair amuses the court to no end. Finally, Don Quixote sets out again on his journey, but his demise comes quickly. Shortly after his arrival in Barcelona, the Knight of the White Moon—actually an old friend in disguise—vanquishes him. In the end, the beaten and battered Don Quixote forswears all the chivalric truths he followed so fervently and dies from a fever.

What, then, might Adventist Ethics learn from this foundational novel of Western literature? Apparently nothing, because on one hand it only narrates a person’s life episodes, which are distant from our contemporary sensibility, and because on the other hand it has no explicitly religious or even minimal ethical  interest. It articulates, though, an understanding of reality that differs from previous historical periods and which looks very much like ours today. And, since Ethics is a way of confronting ourselves with surrounding reality by trying to articulate adequate answers to it, this novel reminds us of three important ingredients which should always be present in our own ethical reflections.

1. Ethics has more to do with people than principles

In his book The Art of the Novel, Czech writer and analyst Milan Kundera reminds us that Europeans have a double paternity. They are children of Descartes' clear and distinct rationality but also of Don Quixote’s irreducible and paradoxical complexity. And this complexity, in Don Quixote, as in novels generally, is given by the multiplicity of actors and profiles that are specific to such writing. The main character is never alone and the narrative represents the continuous and unpredictable interaction between the various protagonists, rather than the objective description of impersonal principles, rules or strategies. This is what Carol Gilligan contested, in her book In a Different Voice, to Lawrence Kohlberg’s description of the stages of moral development. Kohlberg had argued that girls on average reached a lower level of moral development than boys did. Gilligan noted that the participants in Kohlberg's basic study were largely male. She also stated that the scoring method Kohlberg used tended to favor a “principled way of reasoning” (one more common to boys) over a moral argumentation concentrating “on relations and persons.” Her critique of deontological/Kantian and consequentialist/utilitarian ethics, based on principles and results, gave birth subsequently to the so called “Care Ethics.” This idea affirms that there is more moral significance in the fundamental elements of relationships and dependencies in human life. And interpersonal relations are never crystal clear. They are always existentially and ethically cloudy.

2. Ethics has to do more with understanding and orienting than in solving reality’s complexity

In Rene Descartes' rationalistic project, the “reductio ad unum” (reduction to one) strategy prevailed in the form of obsession with synthesis, coherence, clarity, or understandability. Conversely, in Don Quixote (according to Kundera), we have the co-existing tension of “multiple events and plots” at whose center are found specific, unrepeatable, and unique persons and characters who resist a final synthesis. And the Romantic Movement, later on, will pick up this respect for human complexity, against the Enlightenment’s analytical obsession to define every aspect of human experience by classification into standard and universal categories (Encyclopedists). But, against a diffuse pragmatic Ethics of “rapid and immediate solution” in favor of a necessary social order, and in alignment with the Wisdom tradition in the Bible or in ancient Greek ethics, Cervantes’s Don Quixote still reminds us of the irreducible complexity of human action and agency that we need to safeguard.

3. Ethics has to do more with opening a future than with preserving reality as it is

Mario Vargas Llosa in his essay “The Truth of Lies” reminds us that the real vocation of literature is to articulate worlds and characters that effectively do not exist in our present reality (and in this sense could be called lies)—not in order to escape but rather to positively transform our present world.  As imaginative literature grows in volume, it is better able to give voice to the best part of our reality—i.e. to its potentiality, its not-yet being, its inner and deeper vocation for the future. Human reality cannot be simply tautological. It is not condemned to repeat itself. And this irreducible vocation for the future represents, per Mario Vargas Llosa, the inner core of Don Quixote. His fantasy and fertile imagination is representative of modern man who, in contrast to medieval man who was secure in an ordered and pre-established cosmos, has instead a new aspiration—that of transforming the world with more justice, opportunity, and more correspondent with our personal inner aspirations. For this reason Don Quixote continuously disobeys and rebels, to the point of ridicule, against what people consider to be common sense and immutable order. Thus Don Quixote is a symbolic, literary cipher of human trust in change and in the future. Indeed, we all have a visionary and a dreaming Don Quixote inside. To be ethical and to behave ethically, sometimes this also means to be Quixotic.