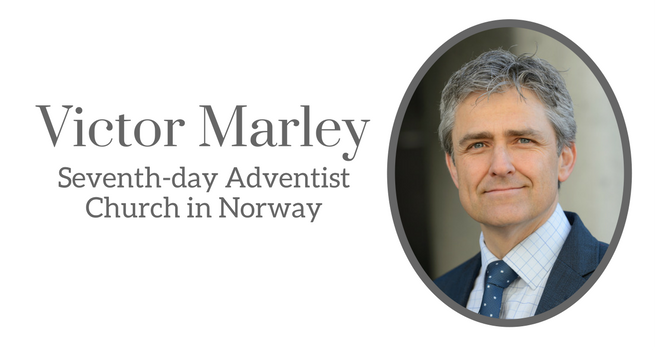 March 22, 2017 | Victor Marley has been elected by the Norwegian Union Executive Committee as the new leader of the Seventh-day Adventist church in Norway. This follows the March 15 resignation of Reidar J. Kvinge, enabling him to focus more directly on evangelism.

“This is both daunting and exciting at the same time,” says Marley, adding that he is looking forward to working with the rest of the leadership team to define the tasks ahead and adapt to new challenges.

“It is important for me to aid and facilitate our mission and our various forms of evangelism,” Marley said. “We need to identify our opportunities and find ways to motivate and equip the church for this task.”

Marley already has plans. “If we are to succeed, it is important to strengthen our Adventist identity. We need to remind ourselves who we are and where we come from to create new enthusiasm around the mission task deeply embedded in our Adventist DNA.”

Part of this may come from his many years of experience in youth work. “We have a lot of potential among young adults in the church. They are eager to use their skills and can help us find new perspectives on how best to carry out the mission Jesus gave us,” he said. That has already recently been noted in the setting up of a new Health Association in Norway.

When required to select a new leader between regular conference sessions, the executive board functions as the nominating committee. Although Kvinge’s decision to step down came unexpectedly, Raafat Kamal, the chair of the nomination committee, noted the spirit of unity and consensus that quickly dominated the discussions.

“The Committee fully recognised Victor’s contribution to youth and family ministries over the years,” Kamal said. “I was pleased with the positive support shown by the committee and know that committe members and the larger Norwegian membership will pray for Victor and his family as he assumes this new role.”

Marley was born in the North East of England in 1969. As the son of an effective evangelist, he grew up listening to the gospel of Jesus Christ as presented through the doctrines of the Adventist church. He first felt the call to ministry as a teenager and was active in the youth ministry of his local church. After leaving school, he worked for an insurance company for a year before embarking upon theological studies at Newbold College in 1989. Six years later, he left with a BA and MA in systematic theology from Andrews University and began ministry in Colchester and Bury St. Edmunds in the East of England, where, along with his wife, Gry Beate, they ministered for five years before being called back to Newbold where they both worked as a part of the pastoral team.

In 2002, they moved to Norway, Gry Beate’s homeland, where Marley became Associate Youth Director in the Norwegian Union. He was elected as Youth Director in 2005, a position he has held since. He states that he “has loved the privilege and excitement of working with youth, pathfinders, children, and families these past 14 and a half years. I have been amazed and thrilled at the way God has led.”

In recent years, Marley’s interest in leadership has led him to embark upon a second MA, this time in Leadership. He says, “The MA in leadership is causing me to grow, both personally and professionally, providing me with tools that I have already begun to use in my work.”

It is still to be decided when Victor will officially take office as it is important to ensure a smooth transition for the Youth and Family Departments.

“It's a privilege to be asked, and I'm honoured by the trust placed on me. However, I feel somewhat overwhelmed when I think of the great challenges ahead. But most of all, I am excited and thrilled that God has led us with steady hands thus far,” Marley said on Wednesday morning, March 22.

A team player, he says, “I’m looking forward to working with the team at the union office, all the pastors, and not least, the church as a whole.”

This story was written by Wider Ursett and originally published by the TED News Network.