Which Ethics? For Which Individual? Revisiting Franz Kafka’s “The Metamorphosis”

Which Ethics? For Which Individual? Revisiting Franz Kafka’s “The Metamorphosis” 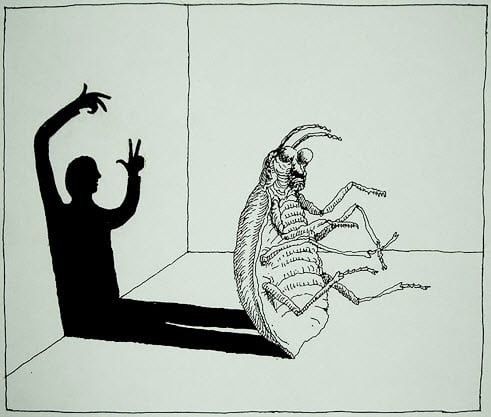 Gregor Samsa, a salesman, is the main protagonist of this story. After a troubled night of disruptive dreams,  he suddenly wakes up to the sound of rain hitting the window, only to discover that at some time during the night he had been transformed into a large vermin. He is quite calm about his new body and spends some time in bed reflecting on his life and on his relationships. As the narrative unfolds, we get great insights into Gregor’s personality. He dislikes his job and boss, but he cannot quit because his parents owe his boss a great amount of money. Gregor has to work five or six years to pay off the debt, so he is stuck but apparently accepts this situation. After he has finished reflecting on his life, Gregor has a difficult time getting off the bed because of his awkward shape. His many legs seem to have a mind of their own. While facing this dilemma, the chief clerk from Gregory’s office has come to ascertain his absence. Now, Gregor has never been late or absent in all of his 15 years working for the company. Because of this, his parents, who had knocked on his door earlier, thought he was ill. The chief clerk talks to him through the door and uses subtle threats and comments on his work although no one had ever complained about its quality before. Gregor tries to defend his work, but the sounds he makes are very “unhumanlike.”  That is understandable; he is now an insect. Those on the other side of the door are alarmed, and Gregor is not able to recognize the new sound of his voice either.

The father sends for a doctor and a locksmith. Gregor, using his mouth and harming himself in the process, finally opens the door. You can imagine the look on everyone’s face when they see him. The trembling chief clerk moves slowly away.  The mother is on the floor disappearing into herself, and the father weeps. Gregor realizes that he cannot allow the chief clerk to leave now, or he will lose his job for sure. His father snaps out of the state he is in and forces Gregor back into the room. His sister Grete is the only one who shows some compassion during the ordeal and brings him some food. But as time goes by, they are forced to change their lifestyle, and this fact consumes and wears them down. At a certain point, Grete tells her parents that they should get rid of the monster. Gregor is not coming back and that she is tired of living this way. The father agrees with her. Gregor wants to grant their wish but does not know how to leave. During the night, he shrivels and dies. Thus Gregor dies as he lived, always putting his family first. They mourn him, decide to take the day off, and go out together. They take time to ask each other about their work, something they  had not done in a long time. They even discuss their finances and decide to move to a better apartment. Through Gregor’s death, his family is apparently able to reconcile and go on living.

The question of Gregor's identity is central to the story. After the metamorphosis is he still a human being? Or is he only an animal? But, if he were he only an animal, why then would he respond so intensively to Grete's playing the violin? Only humans react to music this way. His identity cannot be established judging solely by more immediate reactions because, even though Gregor is impaired as a human being, he still reacts as such. For instance, when the women in his family clean out his room he resents this as a human being, not as an insect. By the same token, mention of his horrible appearance bothers the human element in him; whereas, the animal in him is hurt when he is ignored. The most plausible answer is that, although he is an insect, Gregor nevertheless transcends his animal condition, craving for human and spiritual recognition. Paradoxically, during his existence as a salesman, he certainly had lost both these aspects of life. Man or animal? Maybe the question cannot be answered here or in any of Kafka's works. Despite various interpretations, all of Kafka's animals, like Kafka's human beings, have lost the fixed place which divine creation originally assigned to them. Like all creatures, man or animal, Gregor has lost his previously defined identity without, however, becoming a true insect. Perhaps Gregor is best identified as belonging to the vast realm of the in-between. His (or its) agonizing anxiety reflects his (or its) fate of belonging--nowhere.

Understanding what we are as human beings is not easy to articulate. It never has been, particularly in our times, due to a double revolution. The first one is well known--the “cosmological revolution” of Copernicus, Kepler, and Galileo, who broke down the old Ptolemaic system which reigned undisputed for centuries. They provoked and facilitated passage from a “Geocentric” (Earth-centered) to a “Heliocentric” (Sun-centered) understanding of the Universe. The second one is less known. It is the “anthropological turn” that strongly pushes and conditions us today to no longer understand humanity from a “cosmocentric” perspective but instead from an unusual and radical “anthropocentric” perspective. And the confusion starts here because both revolutions have an enormous impact in the definition and articulation of personal identity. The paradox consists in the fact that while “Earth” (Man included) was “de-centered” (undervalued) with the first revolution, in the second revolution, one element of Earth--“Man”-–is made instead “Absolute” (overvalued). This is the primordial anthropological paradox implicit in contemporary Ethics, that Kafka masterfully described in the life of Gregor Samsa.

But let us closely consider some implications of this “anthropological turn.”  Charles Taylor describes it as the passage from a pre-modern sense of self that he calls “porous self” to a modern one he calls “buffered self.” The “porous self” stems from the social imagery of an enchanted world; its primary trait is an openness toward the world as a causal matrix filled with other humans, spirits, demons, and cosmic forces that produce meaning. Think of a slate tile that remains porous and thus can absorb water and other elements. For a “porous self,” the meaning of things unfold in a middle space in which the self “absorbs” meanings that already exist in the external world. Meaning, then, is prior to the self.

The “buffered self” instead is a mind-centered self in which a clear boundary between the interior and exterior world is now in place. Instead of a porous tile, think of a tile that has been sealed by some chemical process so it now resists water rather than absorbs it. The mind and the world remain distinct spaces; thus agency is primarily, if not exclusively, mental. The demonic becomes a manifestation of some psychological disorder,  and cosmic agency is reduced to internal agency. What Taylor means here is a loss of the idea that there is meaning in the external world that exists prior to the person. Humans make meaning in contact with the external world rather than receive meaning in communion with that world. This is the new secularized social imaginary of the “buffered self,” closed off to an enchanted world at a fundamental level. Here the boundaries between self and other, as well as between mind and body, are much more evident and firm.

But the hidden continuity between “porous self” and “buffered self” is the search for a rational and stable personal identity, even while starting from very different perspectives. Still more, the “buffered self” paradoxically has become even more rational because it is deprived of an enchanted cosmos that gave the “porous self” a kind of mystery.

One of the jewels of Adventism is its holistic anthropology. But the problem resides precisely here because we have not developed it in relation to a “theological cosmology” that, in Adventism, is almost non-existent beyond our exclusive and foreclosing interest in “cosmic conflict” or “cosmic dating.”  With the result that our anthropology is not really holistic, our pretended holism is only anthropological, and, for this reason, essentially articulates a poor holism.

Thus, Adventist anthropology has ended up looking very similar to modern anthropology in its rational vocation. In fact, Adventist anthropology is the typical anthropology of a stable personal identity. That is visible in the current Adventist understanding of homosexuality but also in the understanding of more transversal themes like sex and gender. Our reductive view on personal identity emerges in the difficulty we still have in ensuring “gender historicity” and “gender equality” among us. That is blatantly visible in the poor conclusions we have reached on “women pastor ordination.”

It is not only our current societies (as discussed in my column last month) that have become irreversibly diversified. This has also happened--as seen in Kafka’s novella--with personal identity. It has become structurally heterogeneous, and there is no way back. Formerly, this heterogeneity was immediately synonymous with moral failure and duplicity. Today, at a certain level at least, it is just a sign of the structural complexity of our personal identity.

For this reason, the classical praise of “coherence” as primary ethical category, while still remaining partially valid and necessary, certainly has become insufficient as the main moral tool. It is unable to recognize the heterogeneity embedded in what personal identity and responsible choice means today.

Kafka “The Metamorphosis” reminds us that an exclusive Adventist anthropological model of an homogeneous and definitive personal identity, perfectly transferable into compact and coherent actions, is an illusion. It does not correspond to how we live today. It reminds us that, between actions and personal identity, there must certainly be a relationship of stability and rootedness. But this relationship is neither mechanical nor exhaustive. It is mediated by changes, surprises, and paradoxes that open up our identity toward the future. And a healthy identity, individual or corporate, is one which has learned to welcome, with trust and hope, this intrinsic fluidity.