Feminism and Why Adventism Needs It

Feminism and Why Adventism Needs It 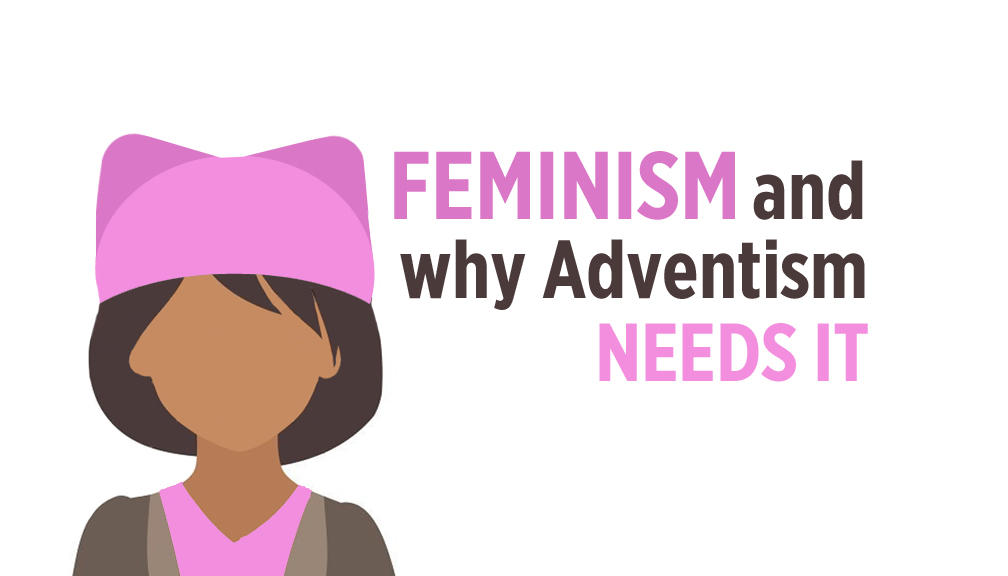 In August of last year, U.S. president Barack Obama published an article on feminism in the fashion magazine Glamour. Identifying himself as a feminist, he wrote that twenty-first-century feminism is about “the idea that when everybody is equal, we are all more free.” This applies not just to basic human rights but to gender stereotypes as well. "We’ve come a long way," he wrote, "but there are still many things we need to work on:"

For Obama, the feminist movement is far from finished. We need to keep working on feminism to liberate everyone, male and female. Other people are less certain about the benefits of feminism.

In a 2014 social media trend called “Why I Don’t Need Feminism,” women were invited to take a picture of themselves with a caption that described why they don’t identify as feminists—and many did.

At the 2015 General Conference Session in San Antonio, Texas, I listened to Natasha Nebblett explain to the delegates why she did not want the GC to allow women’s ordination. She argued that while people often recognize her work as president of Generation of Youth for Christ, “they should give more recognition when I become a wife next February and a mother after that since the Spirit of Prophecy says that that position is higher than the ministry and the desk and the king on his throne.”

I have also heard much about pastor-evangelist Doug Batchelor who argues that feminism is “becoming” more about angry women who wanted to be like men rather than attaining the rightful respect for being a “woman.” He feels that feminism is pushing the church “beyond” voting rights and equal pay into the arena of unisex “thinking.” Now that women have equal pay and are allowed to vote, what is feminism doing? For Batchelor, it is turning all of us into some form of male-female hybrid. It is limiting us, both male and female. Who is right? Is feminism a liberating movement or a limiting one? The answer is too complex to be summed up in a few words. But let us see what we can do.

Feminism existed before the women’s liberation movement in 1960s America, and it is likely to be around for a good while. It has been many different things at different times and to different people. It is only natural that things get a little complicated as a movement gains size and momentum. Like Christianity (or even Adventism), feminism is not a static entity, composed of people who think exactly alike and who all move in the same direction. Nor should it be—if it were, it would not be able to do the thing it aims to do: work toward equal rights for all people, regardless of their gender. In fact, the illusion of unity—unity of one group or even of the whole human race—was one of the problems feminism had to overcome along the way. Let me explain what I mean with a short history lesson.

Hillary Rodham Clinton may have been the first woman nominated to a major political party in the U.S., but she is certainly not the first woman to run for the office of president. In 1872, almost fifty years before any woman would be able to legally vote for her, Victoria Woodhull became America’s first female presidential candidate. A campaigner for women’s suffrage, she reasoned: “If Congress refuse to listen and to grant what women ask, there is but one course left to pursue. What is there left for women to do but to become the mothers of the future government?” If the government was not going to listen to women, women would just have to join the government. She lost spectacularly to Ulysses S. Grant, but her campaign drew a great deal of media attention, and she continued to campaign for women’s rights until she died at age eighty-eight—seven years after women were finally granted the right to vote.

Woodhull, and other women like her, formed what is called the “first wave” of modern feminism. The height of first-wave feminism occurred in the nineteenth and early twentieth centuries with the suffragettes and the women’s rights movement. These feminists were largely focused on the legal aspects of equal rights: the vote, the right to be educated, the right to own property.

The “second wave,” generally marked as taking place from the 1960s through the 1990s, came up against a different set of challenges. Equipped with the legal rights won by first-wave feminists, the second wave set out to negotiate questions of identity and social justice. Women were now legally “equal,” but deep-seated cultural biases still kept them from true equality on most fronts. They had to fight for the right to be women in the workplace, and in this new environment, they were forced to reconsider what it actually meant to be a woman and what it meant for a woman to be equal to a man.

Undaunted by these challenges, second-wave feminists succeeded in reforming higher many elements: education, business, politics, and reproductive rights; set up organizations and legislation for the protection of battered women; raise awareness about the movement at a popular level. Second-wave feminism was loud and proud, and this is the wave we are still most likely to associate with the term “feminism.” These women also changed history in a deeper way. I work at a university, teaching and researching literary and cultural criticism.

Basically, I study how art and literature shape identity. In my field, feminism is hugely important— and not just because the feminist movement ensured my right to work in the first place.

For hundreds of years, people assumed that great art was universal. We believed that it held up a mirror to the world—that it showed us who we were as people. Then, in the middle of the twentieth century, we suddenly and shockingly realized that most of the art we had previously considered “great” was actually only reflecting a very small portion of the world, from a very specific point of view. Most of the art was made by men, specifically, well-off white men from the West. We discovered that “we” were not as united as we had thought and that our unity had only been possible because we were excluding everyone with a different perspective than ours—people who were women, who were black, who were poor or uneducated. These people did not matter in our society, and so their art could not possibly matter either. Then a group of feminist critics came along—at this point still mostly women—who, thanks to their nineteenth-century feminist forerunners, were finally allowed to participate in scientific discourse. They pointed out, in a language other scholars could understand, that actually these other perspectives were everywhere and could be very valuable indeed.

The impact this realization had on the arts (and later on the sciences as well) cannot be overstated. There were endless, conflicting worlds and perspectives out there, just waiting to be recognized. The effect was revolutionary.

Batchelor argues: “All of history has been altered in the last fifty to sixty years. Up until the feminist movement, the church understood for 1,900 years that the final authority was to rest solely with husbands and men pastors.” He is absolutely right. Feminism is responsible for teaching us to read differently and from multiple perspectives. It opened our eyes. It showed us that our society was not as fair as we thought it was but that we could make it better. We just needed to open the floor to other voices.

Soon the feminist scholars were followed by postcolonial scholars and class scholars. They did not focus on women but on non-Western peoples and on the poor. They were followed by disability studies and by queer theory. Some feminist critics (male and female) even turned their focus back to the old perspective, learning how these new perspectives could help us reevaluate thousands of years of rich, white masculine—and all the men left out by that category. The floodgates were opened, and the knowledge poured in.

Some people took this knowledge to strange extremes, as people always do. This was OK. Feminism taught us that difference was not the end of the world; it was the beginning. Some feminists hate men, and some feminists are men. A thousand varieties of third-wave feminism were born. These theories responded to second-wave feminism’s attempts to avoid the mistakes of the past 2,000 years by teaching us that there is more than one way to be a woman (or a man). Where the second wave was mostly composed of highly educated white women, third-wave feminists work to improve conditions for all people, each according to their needs.

Some of these feminism theroies are contradictory, and that is OK. People are contradictory as well. But it is important to recognize that feminism made their contradiction possible in the first place. Feminism is not obsolete. It is still doing exactly what it was meant to—building the opportunity for real democracy and equality, for everyone.

The Adventist Church still needs feminism, too. The world church is arguing for unity, but feminism has taught us the dangers of that type of unity. Can the church be truly unified? Or is it enforcing unity at the cost of people? Are members only united at the cost of excluding everyone with a different perspective? Could that be why the church needs feminism? Not, as Batchelor fears, to push the church into “unisex” thinking but to allow everyone in the church a voice? To make our church better and more fair? To let all of us be equal and more free?

Megen Molé is a feminist and a fourth-generation Adventist. She was a Dutch delegate to the 2015 General Conference Session in San Antonio, and she is currently a teacher and Ph.D researcher at Cardiff University in Wales.

This article was first published in Volume 44, Issue 4 (Winter 2016) of Spectrum under the title "The Dangers of Unity."