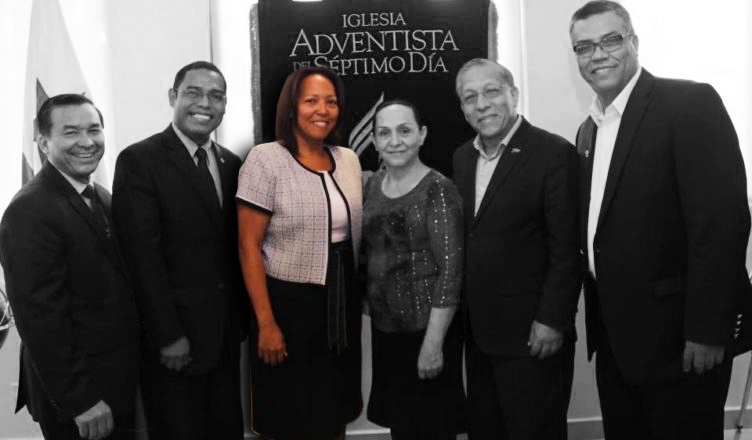 The Panama Union Mission of Seventh-day Adventists made history at its mid-year executive committee meeting by appointing Shesell Busby (pictured, third from left) the district pastor of four churches in the Metro Los Andes Experimental Mission. Ms. Busby is the first woman to serve as a licensed minister in the Panamanian Union Mission.

Announcing the hiring of Ms. Busby, the Panamanian Union Mission wrote on its Facebook page,

The Panamanian Union continues to make history, in the board of half a year was voted to employ the graduate in pastoral theology miss Shesell Busby, Panamanian, graduated in the theological seminary of Cuba. The Graduate Busby will serve as pastor of district pilot in the mission of the Andes, metro will be under his charge 4 churches.
From right to left are the RP. Carlos Saldaña, Secretary of the union, PR. Demetrius Aguilar, chairman of the experimental field, the PR. Shesell Busby, Ms Rosalinda of de gracia, director of the ministry of women, the PR José De Gracia, President of the union and Joseph Smith, Treasurer. In the panamanian union we are joyful to be the first union in Central America and Panama we opened the doors to the ladies that are studying to be ministers, welcome Pastor Busby!

Busby, a recent graduate of the Cuba Adventist Theological Seminary (Seminario Teologico Adventista de Cuba) is one of a handful of women pastors in the Inter-American Division, including several women who serve in Cuba.

When the Seventh-day Adventist Church commissioned studies from each of the thirteen divisions on the ordination of women in advance of the 2015 General Conference Session, the Inter-American Division found no biblical prohibition to ordaining women to pastoral ministry. From the IAD position paper:

All the members of the Church of Christ are a "royal priesthood" to announce or proclaim the gospel of salvation. We are all one body and God shows no partiality: we are all sons and daughters of God with the same access to salvation given by Christ. God has distributed his gifts to both men and women without making any distinction. God grants opportunities and field for service to women in a wide range of ministries. The designation of deacons and deaconesses is grounded in Scripture. There is no explicit mandate in the Bible for the ordination of women or men to church leadership, yet there is no command against the same. The Inter-American Division is willing to accept the ecclesiastical decision taken by the SDA Church in plenary session.

The Inter-American Division has not ordained women pastors thus far, but has signalled its openness to doing so. Appointing qualified women candidates is a step toward equality in ministry.