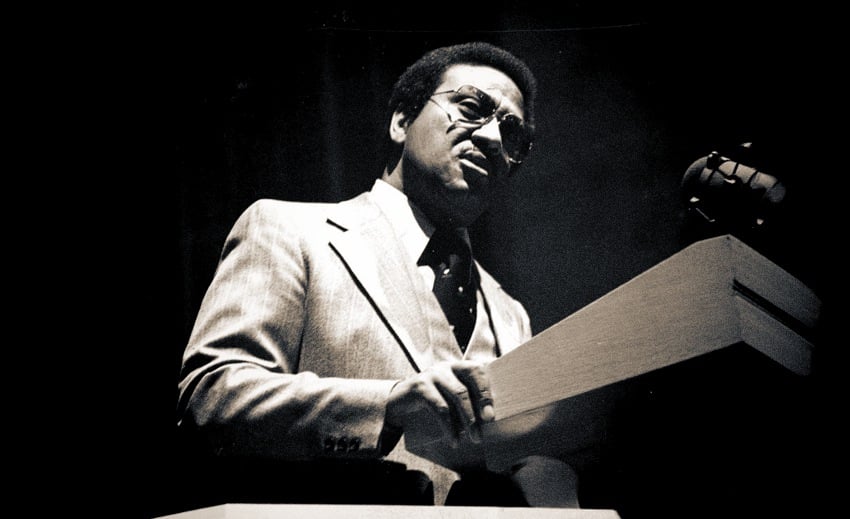 Charles Decatur (C.D.) Brooks was born in Greensboro, North Carolina, on July 24, 1930, the tenth child of Marvin and Mattie Brooks. Although Methodists at the time, shortly after C.D.’s birth the Brooks family began observing the seventh-day Sabbath in honor of a pledge Mattie Brooks made to God while in a hospital bed suffering from a near-fatal illness. Learning more truth years later from reading The Great Controversy, C.D., along with his mother and six sisters, was baptized into the Seventh-day Adventist Church on a Sabbath in 1940.

C.D. was raised on a 40-acre farm outside of Greensboro where his family grew a variety of produce and raised livestock and poultry. Although mischievous, playful, and rough like most boys his age, C.D. had an unusual proclivity toward spiritual things, teaching his Sunday school class at six years old. When he was baptized into the Adventist Church at 10, even at that age he was certain he had found the truth. But it wasn’t until sitting alone under a tent at age 16 in 1947 that C.D., who was planning to enroll in the dentistry program at the local college, heard God’s voice for the first time. E.E. Cleveland had taken Greensboro by storm that summer, pitching a tent on Ashe Street and proclaiming the gospel there to a crowd with an overflow 14 people deep. One Sabbath that summer after a particularly powerful sermon C.D. remained under the tent long after the last person had departed. “Charles, I want you to make truth clear,” C.D. distinctly heard a voice say. Then he had a vision of him standing behind the pulpit at the front of the tent proclaiming the truth with power and clarity. That moment C.D. jettisoned his career plans for dentistry for the ministry, setting his sights on Oakwood.

C.D. studied theology at Oakwood College from 1947 to 1951, paying his way through school by milking cows at the school’s dairy farm, as a packer in a meat factory, and other odd jobs. He was mentored and taught by legendary professors C.E. Moseley, Eva B. Dykes, C.T. Richards, Gaines Partridge, and Jacob Justiss, with F.L. Peterson as president and Anna Knight a resident on campus. During his collegiate years C.D. spearheaded the construction of the Bell Tower, edited Acorn, Oakwood’s yearbook, his senior year—the first annual with full color—and was a member of the fabled class of 1951, which included classmates H.L. Cleveland, Minneola Dabney Dixon, J.H. Wagner, Jr., Russell Bates, Danny Davis, Lovey Davis Verdun, and Lorenzo Paytee. Most importantly though, at Oakwood C.D. met the love of his life, Walterene Wagner, daughter of John H. Wagner, Sr., a stalwart of 20th century black Adventism—among other things being the first president of Allegheny Conference, one of the five inaugural leaders of regional conferences in 1944-1945. C.D. heard God speak for the second time in his life when a voice said to him concerning Walterene, “Charles, this is the young lady you will marry.” The two were wed on September 14, 1952, at the Ebenezer Seventh-day Adventist Church in Philadelphia, Pennsylvania.

Upon his graduation from Oakwood in late spring of 1951, the Allegheny Conference hired C.D. His first assignment was as an intern with veteran Antiguan minister J.G. Dasent for an evangelistic meeting in Uniontown, Pennsylvania. C.D.’s first pastoral assignment came months later at churches in Wilmington, Delaware, and Chester, Pennsylvania. The year of his marriage Brooks began pastoring a four church district in southwestern New Jersey. The next year C.D. and Walterene had their first child, Diedre. Their other child, Charles, Jr., or “Skip,” would come in 1960.

From 1957 to 1959 C.D. pastored the Ephesus Seventh-day Adventist Church in Columbus, Ohio. In 1959 he began what is perhaps his most significant pastorate at the Glenville Seventh-day Adventist Church in Cleveland, Ohio, a heady assignment for a man still in his twenties. Already C.D. had established a reputation as a superlative evangelist, once quipping that “Evangelism is the elixir that warms up a cold church, the force that moves the members from standing on the premises to standing on the promises.” He conducted successful tent meetings both in the cities in which he pastored and as a guest evangelist in other conferences. His rule was, “Don’t ask anybody for permission—just put up your tent and start preaching.” Perennially Brooks had either the highest or was in the top three in souls baptized in his conference in a day that was distinguished by prolific evangelists. In the summer of 1961 alone C.D. baptized 179, the new influx of converts putting the membership of Glenville above 1,000. In his final evangelistic series in Cleveland, Brooks baptized 108. 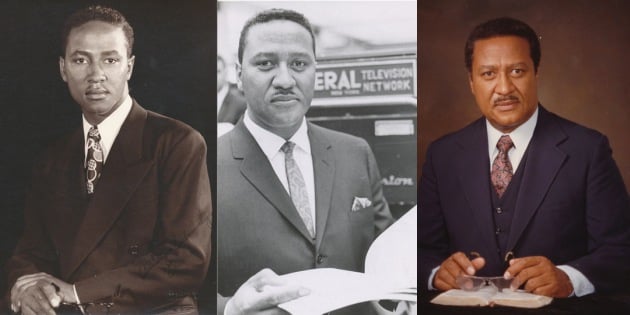 In 1963 Neal Wilson, president of the Columbia Union Conference, requested that C.D. be the field secretary for the union, at the time a risky but calculated move. Wilson, who first called Brooks “C.D.” to distinguish him from the renowned singing evangelist Charles Lee Brooks, rightly figured that a man like C.D. could do much to break down the entrenched racial barriers in the union and the wider church. As field secretary for two years and ministerial secretary from 1966 to 1971, C.D. toured the union speaking, preaching, training ministers, and doing evangelism. In fact, one of C.D.’s stipulations when he accepted Wilson’s job offer was that he be able to continue running evangelistic meetings, and this Brooks did in a number of storied campaigns, including Philadelphia (1964), Newark (1966), and Egypt (1967).

In 1971 General Conference president Robert Pierson personally called C.D. to ask him to serve as a field secretary of the world church. In this position he would be one of seven general field secretaries, essentially a point-man for the denomination, assigned to any type of field service or project in which the world church needed him. As field secretary C.D. truly became a globetrotter, representing the church from the most populous metropolises to the remotest areas, preaching and conducting evangelistic campaigns the world over. The only continent he didn’t visit was Antarctica, quipping, “I didn’t want to go to Antarctica because there was no one to preach to.” In a crusade in Jamaica in 1972 C.D. baptized more than 500, and the next year in Chicago, 243. In C.D.’s wake there were myriad new churches raised up comprised of those won in his efforts. Listeners of all races, nationalities, ages and backgrounds were captivated by Brooks’ powerful, earnest, riveting, and eloquent truth-filled sermons. Cassette tapes featuring his sermons were reproduced by the thousands.

In 1974 Walter Arties, a Seventh-day Adventist media personality, convinced C.D. to become speaker-director for a new television ministry that he had founded called Breath of Life. Initially wary because he preferred speaking to live audiences, Brooks agreed to the idea, realizing that television was a medium to reach more souls than he possibly could speaking in person in tents or halls. And so C.D., still a fulltime GC field secretary, beginning in July 1974, several times a year recorded for Breath of Life in the studios at the Adventist Media Center in Thousand Oaks, California. From its inception Breath of Life, the first black religious television program, was a General Conference ministry, funded by the church, as well as from offerings and donations. The early production team consisted of Arties and Message Magazine editor Louis B. Reynolds, with gifted musical groups such as the Breath of Life Quartet and features from Wintley Phipps, Ullanda Innocent-Palmer, Eleanor Wright, and T. Marshall Kelly.

Breath of Life Ministries had a very effective system of evangelism: the ministry team would plan an evangelistic meeting in a large city, buy television time on a local station and air the Breath of Life telecast, go door to door distributing flyers advertising the television program and the evangelistic series, and after weeks of airing the show then run an evangelistic series with Brooks as speaker. Using this modus operandi, Breath of Life ran hugely successful evangelistic campaigns in dozens of U.S. and international cities, among the most memorable being at the Warner Theatre in Washington, D.C., in 1978, in which over 300 were baptized and a Breath of Life congregation was organized; Barbados in 1989 in which 520 were baptized; and in Brooklyn, New York, in 1991 with 308.

As speaker-director of Breath of Life, Brooks took his place among legendary Adventist media trailblazers such as H.M.S. Richards, George Vandeman, and William Fagal. A second wave of Adventist televangelists, including Dan Matthews, Dwight Nelson, Mark Finley, Lonnie Melashenko, Walter Pearson, and Doug Batchelor followed in their footsteps. In 1989 Breath of Life aired on Black Entertainment Television (BET), potentially reaching a staggering 90 million people per week in the United States and Caribbean. C.D.’s messages were also distributed by VHS and later CDs and DVDs in the tens of thousands.

C.D. was speaker-director of Breath of Life Ministries for 23 years, from 1974 to 1997. In his time at the helm, the ministry brought approximately 15,000 people to Christ, established 15 Breath of Life congregations, and was viewed by untold millions. Significantly, C.D. was a leading evangelist of the global church during the unprecedented years of soul-winning in the 1980s and 1990s. Brooks experienced many singular honors throughout these years, including: speaking at Ronald Reagan’s religious inaugural celebration in 1981; preaching at several General Conference sessions; receiving an honorary doctorate from Andrews University in 1985; being asked by the GC to serve as a vice president in 1985; in 1989 being featured on the “Christ of the Narrow Way” painting by Elfred Lee, commissioned by The Ellen G. White Estate; in 1994 being inducted into the Martin Luther King, Jr. Board of Preachers and Collegium of Scholars at Morehouse College in Atlanta, Georgia; and gracing the Founder’s Wall at the Adventist Media Center. In 1995 Brooks participated in Net ’95, the largest and most extensive evangelistic program in Seventh-day Adventist history up to the time. Brooks’ last meeting as Breath of Life speaker was in March and April of 1995 in Phoenix, Arizona.

On June 10, 1995, shortly after concluding a sermon at the South Central camp meeting on the campus of Oakwood University, C.D. Brooks had a heart attack. On January 1, 1996, he officially retired as GC field secretary, the longest to hold the position, and as speaker-director for Breath of Life in the spring of 1997. He was honored with various ceremonies at the General Conference and other venues.

Brooks had a long and productive retirement. In 2007 in honor of E.E. Cleveland, Charles Bradford, and C.D. Brooks, the Bradford-Cleveland-Brooks Leadership Center (BCBLC) was established, housed on the campus of Oakwood University in a 10,000-square-foot, $2.5 million state-of-the-art edifice. On December 1, 2010, The Ellen G. White Estate elected Brooks a lifetime member of The Ellen G. White Estate Board. In 2010 C.D. preached a series for Hope Channel on the theme “Revival and Reformation,” and spoke for a similar series on 3ABN. On February 24, 2013, C.D. was appointed chaplain of the North American Division. Later that year in November 2013, a full-length biography of Brooks, C.D.: The Man Behind the Message, was published by the Review and Herald. Consistent with his media pioneering ministry, with the advent and rise of social media and video and audio-sharing websites, C.D.’s sermons and ministry gained a new life on the internet with hundreds of thousands of views, reaching new generations.

Dr. Benjamin Baker serves in the General Conference Office of Archives, Statistics, and Research as Managing Editor of the Encyclopedia of Seventh-day Adventists and is co-author of the 2013 biography, C.D.: The Man Behind the Message.