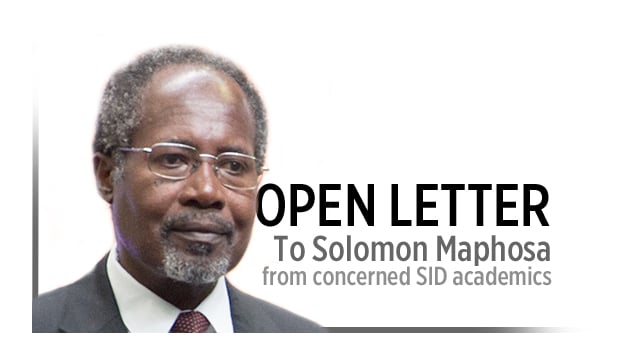 A group of academics in and with ties to the Southern Africa-Indian Ocean Division of Seventh-day Adventists (SID) has written the following open letter to Acting President Solomon Maphosa, who assumed the presidency when SID President Paul Ratsara resigned last week amid an ongoing academic qualifications scandal. The signers of this letter have stated that despite many requests for intervention from the General Conference and the SID, they have received no response from either entity. As a result, they have made the letter public.

It is of further note that the Kwa-Zulu Natal Free State Conference in South Africa issued a letter to the KNFC constitutency stating, "In the light of the recent and ongoing media reports concerning allegations of academic fraud within our Seventh-day Adventist Church leadership, we wish to further reassure you that measures are in place in order to ensure that no worker within this Conference holds any fraudulent or invalid qualification which could contribute towards the tarnishing of the image of this Conference and the Seventh-day Adventist Church in general." -Ed

Looking Forward: A Statement from Concerned Adventists who work in Academia

We would like to express our sadness over the developments the Church in the SID is currently faced with. The issues surrounding the academic qualifications of Pastors Paul Ratsara and Paul Charles have been demanding a lot of attention and energy from the church and has indeed distracted us from focussing on the important business of the church.

We have also noted the statement issued by the General Conference on May 31, 2016 on the resignation of Dr. Ratsara and the fact that you will serve as Acting SID President until the election of a new President.

We would like to commit ourselves to prayer and support for you and your leadership team at the SID as you serve in these challenging times.

There are indeed many challenges that would require your leadership as we, as a church, work towards appropriate and sustainable solutions.

1. Since it has now been determined that Pastor Paul Charles does not have the required formal training (academic qualifications) to serve as a minister in the Adventist Church, it would be prudent that his services as the Director of Communication, Public Affairs and Religious Liberty at SID be terminated. And this is not primarily because of the academic qualifications, but in light of the way he misrepresented his educational qualifications. This does not only apply to the qualifications from the Freedom Institute of Theological Studies and Research (India) but also to his claims that he has since studied for a second PhD. It is our strong belief that he does not have the moral and ethical characteristics and the integrity to continue to serve as a Minister in the Adventist Church

2. The now widely reported revelations that Dr. Hopeson Bonya (SID Vice President) compiled major sections of the UNISA doctoral thesis of Pastor Ratsara raises a number of issues that would need urgent attention. Dr. Bonya’s contribution to the PhD thesis (unless it was known and declared to the University) was in violation, on the part of Pastor Ratsara, of guidelines on how doctoral research work should be done. It was also an unethical act by Dr. Bonya, and this should neither be overlooked nor taken lightly, no matter what the circumstances surrounding these activities were.

It is therefore our firm belief and recommendation that the following steps be taken:

b)  The SID Ethics Committee be tasked with considering the behaviour of both Pastor Ratsara and Pastor Bonya in this matter and recommend appropriate action be taken.

c)  The University of South Africa (UNISA) be encouraged to conduct its own investigation into the matter and that the SID (as well as the GC) provide full support to the process  through the provision of whatever documents and information UNISA might require.

3. It is also highly recommended that the SID (and all the Union Conferences/Missions that fall within its territory) develop and implement systems that would assist in ensuring that the church does not experience similar events in future. The systems would deal with, among others, the following:

b)  Transparency and oversight in relationships between colleagues (line managers/subordinates) within the organisation. This is because of the numerous questions about how Dr. Bonya could be party to the doctoral work of Pastor Ratsara without anyone else knowing. If it was known by more than the two persons involved, what would have been the appropriate course of action to be taken by those who knew?

c)  It might also be worth looking into broadening the scope of activities of the SID Education Department to go beyond just promoting Adventist Christian education. Apart from focusing on verifying workers’ qualifications, there would also be a need by the Department to assist church workers aspiring to upgrade their academic qualifications at recognized institutions, preferably, in the SID territory. There are many Adventist academics who would be prepared to tutor/supervise church workers studying on a part-time basis. Such academics should be conversant with the Higher Education system and related policies currently operational in the country. Perhaps a preliminary survey of workers needing such assistance would have to be conducted, before launching such a programme.

It is crucial that the SID leadership, in an attempt to move forward, acts to resolve these issues in a manner that would generate the high levels of trust and respect from the church membership. The recent events have led to deep erosions of trust in church leadership.

We hope and pray that God guides and leads His church as we deal with these matters.