Who Are the True Heirs of the Reformation? 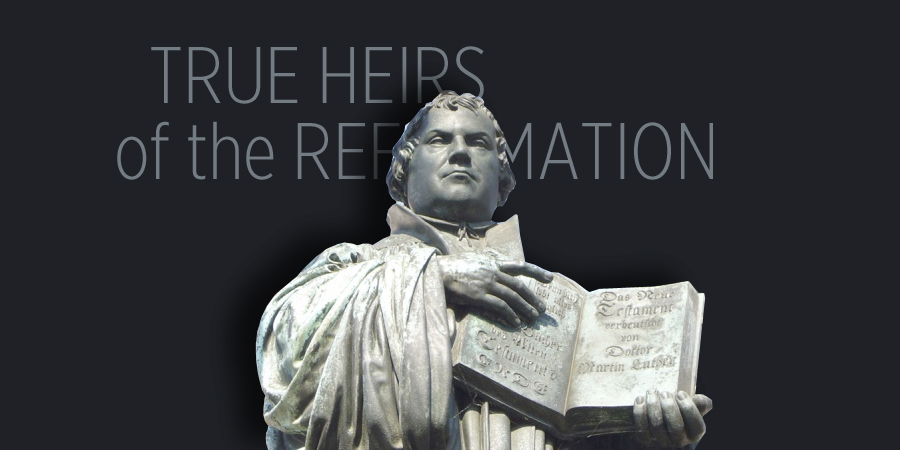 For the first time ever at a major conference, scholars of church history this past week brought Anabaptists into the conversation about the Reformation’s meaning for the Adventist Church. Well- and lesser-known reformers came into play every day, raising provocative questions about the church’s identity and spiritual health.

Around a table in the “Culture Barn” at beautiful Friedensau Adventist University in the former East Germany, participants considered 18 papers on the theme “Perceptions of the Protestant Reformation in Seventh-day Adventism.”  They had come together, from Germany, the United States and places as far away as the Philippines, under the auspices of the university’s Institute of Adventist Studies.

One focus was Martin Luther, whose Ninety-five Theses appeared in 1517 in Wittenberg, an hour-and-a-half’s drive from the conference site.  But beginning with the first address, on Monday evening, May 9, figures absent from or at the periphery of Ellen White’s familiar telling of the Reformation story stimulated exchanges about how a wider perspective might help not only to explain but also to enhance the Adventist faith experience.

Nicholas Miller began proceedings by putting the spotlight on two lesser-known Dutch reformers, Jacob Arminius, who argued against Calvin for the reality of free will, and his supporter Hugo Grotius, who viewed Christ’s atonement through the lens of “the moral government of God.”  Through John Milton, who was a friend of Grotius, these reformers had substantial, if indirect, influence on Ellen White, not least on her “great controversy” motif.  Miller also suggested that if God’s government is “moral,” then so ought any government to be, and said that this entails Adventist responsibility to bear a witness on matters of social justice.

On Tuesday morning Stephan Höschele, of the host university, explored the variety of ways in which early Adventists used key terms related to the Reformation.  Uses of “Protestant” and “Reformation” were at first negative; all churches, including the Protestant ones, were seen as fallen. Later, however, church writers showed more sympathy for the Reformation Churches, and in the 1870’s commendation of certain Protestant efforts began to appear.  By the early 1900s appreciation for Protestant mission agencies led church leaders of the Eastern Asian Division to declaim: “We recognize every agency that lifts up Christ…as part of the divine plan for, the evangelization of the world.”  The statement later appeared (as it still does in simplified form) in The General Conference Working Policy.  Höschele’s point was to show development, from a negative view of the Reformation Churches to the more positive view that the Reformers were 'precursors' of Adventism, and Adventism the Reformation's true 'heirs.'

Denis Kaiser, of Andrews University, explored the theme of Martin Luther as “the Protestant Reformer par excellence” in the development of Ellen White’s discourse.  Daniel Heinz, of Friedensau, argued that, although contemporary Lutheran theologians may have forgotten it, Luther regarded this world as “the devil’s child” and pointed to signs of the times from Bible prophecy as helping us prepare—in Luther’s case, joyfully—for the return of Christ.  In the afternoon, Jón Hjörleifur Stefánsson, a doctoral student at the Free University in Amsterdam, described how Luther came to identify the papacy as the Antichrist.  All these themes, the presenters pointed out, appear also in Adventism.

Two papers about scriptural authority followed these.  Christian Lutsch, a student at Friedensau, looked at Luther’s account of sola scriptura, with its objection to “the binding of scriptural interpretation to tradition.”  He noted that “Christ is the center of Luther’s hermeneutic,” or as Luther himself put it, “‘the true test by which to judge all books…’”  In reading the Bible, the point, Lutch said, interpreting Luther, is that Christ be “permitted to speak.”  Another Friedensau student, Sully Sanon, from Haiti, made a case for “dialogue” and for what he called “devotio”—fidelity to the text, sacrificing of self before the text.  These in tandem, he said, are ways of overcoming both “fixed tradition” and also the “hermeneutical chaos” created by “naïve” approaches to the Bible.

Wednesday morning a paper by Timothy J. Arena, a doctoral student at Andrews, was read in his absence, and the focus now was Philip Melanchthon, who worked alongside Luther in Wittenberg.  His concept of salvation influenced Arminius, and through him John Wesley, and this legacy, the author suggested, reached Adventism through Ellen White.  According to Melanchthon, sin gravely incapacitated the human will, but by the “forensic imputation” of Christ’s righteousness and the assistance of the Holy Spirit, the person of faith receives the “gift” of reconciliation and the power to embody “the contours of the Christian obedience.”  This view, and in particular this doctrine of “forensic justification,” became, the paper argued, Ellen White’s essential outlook, and it counts today against all Adventist tendencies toward moral “perfectionism.”

Thomas Domanyi, a long-serving scholar and church leader from Switzerland, presented John Calvin’s legacy, showing how it is mirrored in many points of the Fundamental Beliefs of Seventh-day Adventists.  Two claims stood out as potential provocations in the context of Adventist conversation:  One was Calvin’s rejection of Luther’s privileging of the New Testament versus the Old; another was his use of the Old Testament to justify full Christian cooperation with civil authority.

Reinder Bruinsma, the scholar and former church administrator from the Netherlands, cast his eye on Adventist church governance.  The church’s American beginnings make Adventism “utilitarian” in this regard, and here the influence of Reformation figures, whose views the author briefly sketched, has usually depended on “pragmatic” considerations.  Bruinsma endorsed this criterion for further development of institutional structure, but lamented what he saw as both lost “adaptability” and seeming diminishment of the church’s “original aversion to a strongly hierarchical system.”

The morning ended with reflections from Michael Campbell, who teaches in the Philippines.  He reviewed Luther’s understanding of the Lord’s Supper, noting, too, how Protestant hostility to Catholic conceptions has generally “deemphasized the importance of the Lord’s Supper.”  He showed that Adventists at first limited communion to committed believers, but then changed toward today’s “open communion,” speculating that this may owe, at least in part, to expanding “missiological horizons” as the church abandoned the “Shut Door” theory of the late 1840s and early 1870s began moving into foreign missions.

A turn to the Anabaptists, the still influential dissenters from Reformation coziness with civil authority, began Wednesday afternoon.  Martin Rothkegel, who teaches at a Baptist institution in Berlin, observed that the Anabaptist story contributed to “modern understandings of a free society” and has come to appear “more attractive” in the wake of the Hitler debacle in twentieth-century Germany.  In the body of his presentation, he offered detailed description of the movement’s plural origins: it was “no monolithic entity,” even with respect to non-violence.  With an eye to his audience, he described the brief outbreak of seventh-day-observing Anabaptism in the south of Moravia.  He also pointed out that Dutch Mennonites, one expression of the Anabaptism, played a key role in the introduction of believer’s baptism to separatist circles in seventeenth-century England, where the formation of “Baptist movements” would come to have influence in America.

Trevor O’Reggio, from Andrews University, argued for clear similarity between Anabaptism and Adventism. With respect to baptism, church discipline, and the Lord’s Supper,  and to separation from the world, salvation, eschatology and religious liberty, Adventist perspective suggest a substantial, if also indirect, “lineage” to this movement.  He invoked Adventist historian George Knight as backing for this claim, and noted further that some 30 percent of Millerite preachers were, like Miller himself, Baptist.  He referred, too, to the influence of Seventh-day Baptist mission Rachel Oaks.

Charles Scriven followed O’Reggio by considering “the most formidable systematic thinker” among contemporary theologians who take a “NeoAnabaptist” point of view.  His elaboration of James William McClendon’s thought focused on possible “leverage points” for Adventist self-criticism and renewal, and offered, among other things, an account of McClendon’s Anabaptist hermeneutic, or Bible-reading strategy.

The final morning was Thursday, May 12, and there was a turn to 1888 and the message of righteousness by faith.  First Woody Whidden, now retired from Andrews University, argued that Ellen and James White had more to do with the overall 1888 experience than A. T. Jones and E. J. Waggoner.  These latter both left the church eventually, as Whidden was at pains to point out, and in the case of Waggoner in particular, there was a sharp veering away from justification by faith and the penal substitutionary understanding of atonement.  He argued that these facets of Adventist theory regarding “righteousness by faith” became, under White’s influence, Adventist orthodoxy, as well as examples of Reformation orthodoxy.

Gilbert Valentine, of La Sierra University, told the story of the Ford Controversy during the 1960s and 70s, when again righteousness by faith was a galvanizing doctrine.  The Ford story began with Robert Brinsmead’s incessant advocacy of moral perfectionism, and became a nearly church-wide quarrel.  Desmond Ford responded with his popular preaching of the assurance of salvation, while several top leaders, including two editors of the Adventist Review and the General Conference president, swung toward the perfectionist perspective even as Brinsmead himself was suddenly renouncing it.  Martin Chemnitz, a later Reformer and hostile commentator on the Catholicism’s Council of Trent, now came into play, and discord deepened.  Ford was eventually removed from the Adventist ministry, and many others also left the ministry, or even the church, over what was going on.  The whole story illustrates, said Valentine, how one factor in Adventist disharmony over these matters is its different perceptions of the Reformation.

So are we, Rolf Pöhler asked as the conference was coming to its close on Thursday morning, the true “heirs” of the Reformation?  In retirement, he still teaches systematic theology at Friedensau, and along with his successor Stephan Höschele, was one of event’s key organizers.  We understand ourselves, he continued, to be “keepers of the flame,” “restorers of early church tenets,” “revivers of neglected truth.”  But maybe these words, he suggested, are more like a mission statement than a description of settled fact.  And as for the claim to be “the ‘final remnant’ of God’s true church,” as one Adventist interpreter of the Reformation put it years ago, this, too, deserves a second thought.  Are we as committed as we should be to hearing what God is saying to us?  Is the Bible now “less bound by the shackles of ecclesiastical authority than it was in Reformations times…?”

Pöhler’s questions evoked, it appeared, the sense of humility he was looking for.  He seemed to say that aspiration is better than self-regarding claims.  One conference participant had remarked that truth “cannot be inherited, it has to be discovered,” and Pöhler now repeated the remark.

The proceedings ended with participants looking forward to an afternoon excursion to Wittenberg.  They were also weighing the thought they would go home with: Can a movement be among the Reformation’s true heirs unless it is humble through and through?