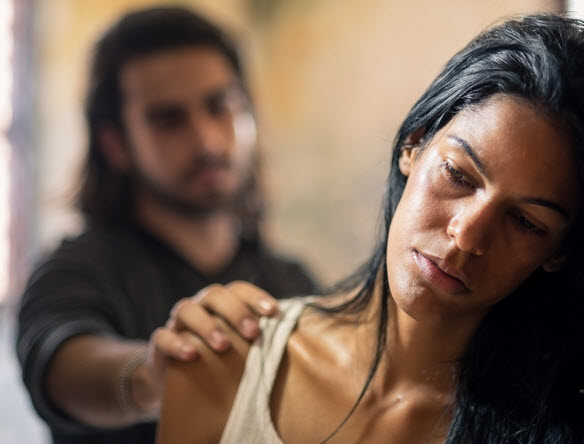 I couldn’t be the only one investing in the relationship. But I did try hard. I called and she would cut the conversation short. I’d ask her to hang out and she was always too busy. I would offer to come over and it was always “a bad time”. Fine.  I could take a hint. That was the end of our friendship. After I moved away, I found other friends. Over time she had truly faded from my regular thoughts. But one day I got a call from a vaguely familiar number. “Can we talk?” To say I was surprised would be an understatement! But I obliged her. I never would’ve guessed what she wanted to tell me. She had finally decided to end her relationship—not a friendship--but a toxic abusive relationship with a man she’d been with for over a decade. She had stopped hanging out because he demanded to know her whereabouts at all times. She didn’t have the ability to talk because it would end in an argument about why she was talking with other people. Friends couldn’t visit because he wanted to isolate her from everyone else. She tearfully explained that she had wanted to tell someone, but she was both afraid and ashamed.

The fear I understood. He was definitely an intimidating guy in terms of size. But ashamed? Really? “Of what?” I inquired. Her shame stemmed from her reluctance to admit that she had “failed” in choosing someone. That her relationship—and her abilities—were flawed. After all, we put a high value on being in relationships. We do so to the detriment of people’s mental and physical well-being. Romantic involvement is so ingrained that people are willing to subject themselves to abusive situations, maintain unhealthy boundaries, excessively lower their standards, and even compromise their principles to be with someone else—anyone!

This is why I’ve bristled at some of the conversations I’ve engaged in with some of my LGBT Christian friends. No one should be compelled to strive for congruence to beliefs they don’t adhere to. Let each be fully convinced in his or her own mind (Romans 14:5). So if someone is not Christian, Christian values don’t apply. Similarly, if one is truly convinced of a certain interpretation of Scripture, by all means, live in accordance with your convictions. Not every denomination sees texts the same way, and even those within our own denomination have sincere differences in their theological understanding. I respect that. However, what is insufferable is the argument that, “it just wouldn’t be fair for me not to be with someone”. That line of logic is incompatible with Christian thought. If one strives to follow after Christ and is convicted that Christ is asking them to forego something to be in His will, “it’s not fair” isn’t a real argument. But we perpetuate this line of reasoning when we act like singleness is a fate worse than death. When we act as if being in a romantic relationship is far more important than anything else –even God’s will. This was the same reasoning put forth by a friend who tried to justify having an affair. “Well, just because we happen not to be married to each other doesn’t mean we shouldn’t have what makes us happy. We were meant for each other. It wouldn’t be fair for us not to have this relationship.” Similarly, though she may not be a member of our church, this same rationale was expressed by a woman featured on the popular blog, Humans of New York: It’s better to have “a fraction” of a person than to be alone! I’ve known men and women, laity and clergy, young and old all suffer because of this mentality. It’s broken individuals and its broken homes.

Are the legacies of Jeremiah, Daniel, Paul—and even Jesus—somehow diminished because of their singleness? Obviously we wouldn’t affirm that notion. But we give the message in subtle and not so subtle ways—that this is the case for people in the 21st century. We owe it to our sisters and brothers to stop this rhetoric. Let’s start prioritizing individual wholeness over fractions of relationships.