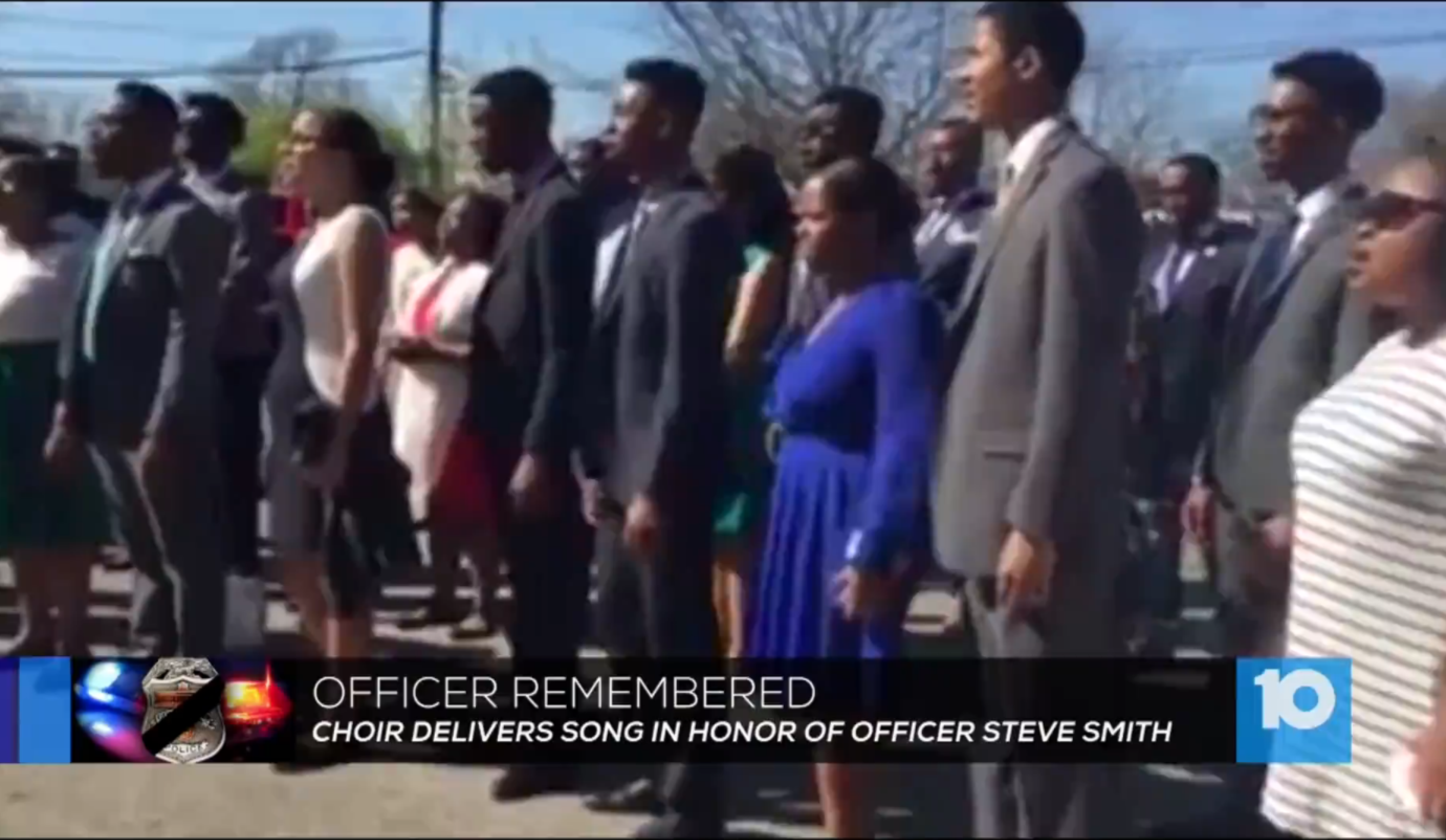 Oakwood University Choir Honors Slain Officer with Song and Walk. The Aeolians, an Oakwood University choir, sang and walked a mile in honor of a Columbus, Ohio, police officer who was killed during a SWAT standoff.  Members of the Central Seventh-day Adventist Church brought the choir that was visiting Columbus for a performance.  The church and the choir decided to pay tribute by singing the national anthem, offering comfort to the officers who remain.  The pastor of Columbus Central, John Boston, is also a Chaplain for the Columbus Police Department. From WBNS News Channel 10, “Out of state choir surprises Columbus Police to honor Officer Smith.”

Eric Walsh's Conservative Sermons Create a Second Conflict, Lawsuit. The Georgia Department of Public Health (DPH) fired Eric Walsh a week after hiring him as a district health director for northwest Atlanta because of the content of sermons he delivered as an ordained lay minister, alleges a lawsuit filed April 20 in U.S. District Court in Atlanta. First Liberty Institute has filed the suit for Walsh, a devout Seventh-day Adventist, alleging the state of Georgia fired him because of sermons he delivered before his employment as a district health director. The DPH fired Walsh in May 2014, one day after he provided copies of his sermons to the state, said Walsh's attorney.  Previously, Walsh directed the Pasadena, California public health department but resigned from his position due to similar concerns about his beliefs. From Baptist Press, “Ga. fires physician for lay sermons, lawsuit says.” And from Pasadena Star News, “Dr. Eric Walsh says he felt ‘persecuted’ in Pasadena and Georgia for his conservative religious beliefs.”

Oakhurst Adventist Christian School Wins $1,000 Science Education Prize. Oakhurst Seventh-day Adventist Christian School was named a winner in the 2016 "Let It Grow Contest," sponsored by the Discovery Education and the Nutrients for Life Foundation.  This contest awards more than $10,000 in prizes to six schools nationwide as part of “ From the Ground Up: The Science of Soil,” an education initiative that offers middle-school students a deeper understanding of the importance of soil science.  Out of more than 30,000 entries nationwide, Oakhurst SDA Christian School received the votes needed to be named a national winner in the "Let It Grow Contest" and will receive a $1,000 agricultural grant and prize pack.  “We are so honored that our community has supported us in helping to grow our science department by voting for us to win this grant,” said Sonya Reaves, Principal and K-2 teacher at the school. From Sierra Star, “Oakhurst Christian school wins award in national Earth science contest.”

Kenyan Education Secretary Tells Schools to Allow Sabbath Observance. Fred Matiang’i, the Kenyan Education Cabinet Secretary who is a member of the Seventh-day Adventist Church, has told schools not to force students to attend classes outside official teaching hours. Matiang’i said some schools have punished Adventist students for refusing to attend classes on Saturday. In a 2012 court case, High Court judge Isaac Lenaola ruled that Adventist students’ beliefs were not being violated by being compelled to attend Saturday classes, and that exemptions for Adventists would be burdensome and chaotic for schools. From All Africa, “Kenya: Matiang'i Tells Schools to Let Adventist Students Keep Sabbath.”