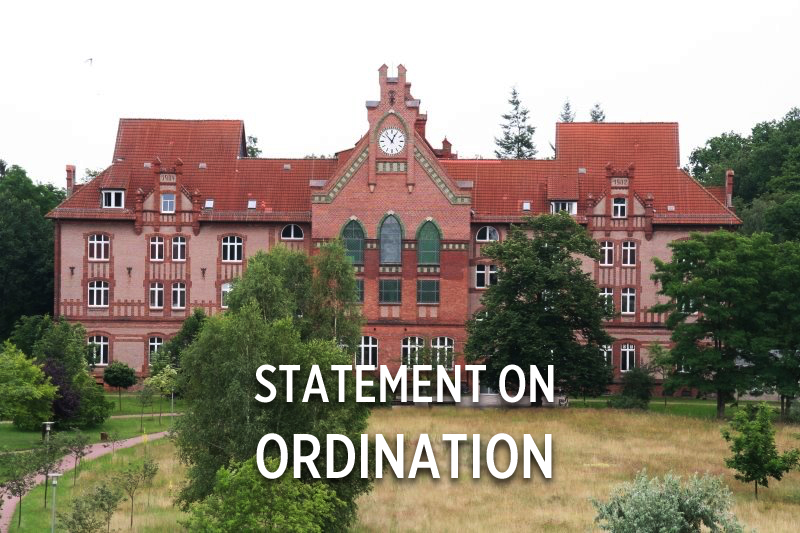 On Wednesday, March 16, 2016, the Faculty of Theology at Friedensau Adventist University issued the following statement on the practice of ordination in the Seventh-day Adventist Church:

On the occasion of the decision of the General Conference in San Antonio (2015) regarding the ordination of female pastors, the Faculty of Theology has discussed the vote taken there and its significance, and has come unanimously to the following conclusions:

We are convinced that the current practice of ordination in our church needs to be corrected on the basis of Holy Scripture. This conviction rests on the following insights.

1. On the one hand, the New Testament testifies that the commissioning to leading ministries in the church is independent of gender (Rom 16:1-12; Phil 4:2-3; Gal 3:28). It also shows deference to the respective cultural situation in order not to constrain the opportunities for the communication of the gospel (1 Tim 2:11-12; 1 Cor 11:4-16; 14:34-40). In our society, the spreading of the gospel is hampered in a twofold way due to the fact that women cannot be ordained as pastors. Firstly, because their spiritual gifts and leadership abilities remain partly untapped, and secondly, because a church loses credibility in contemporary society if it disregards human rights resting on the biblical Christian tradition.

2. On the other hand, and at variance with early Christian understanding, ordination in our church is often seen, not so much as induction into a ministry, but rather as transition into a new status. This is shown by the fact (1) that women may perform virtually all the functions of a pastor but without being ordained for their task, and (2) that only ordained officeholders may ordain others. This constitutes a form of ministerial succession unknown in early Christianity, which fosters thinking in terms of status and power. In New Testament times, ordination is a public commission to a ministry by those who have decided on the assignment (the congregation, its delegates, fellow workers, and leaders). It involves a public prayer for the blessing of God in the discharge of one’s duty and the laying on of hands in His name on the elected person (Acts 1:23; 6:5; 13:2; 1 Tim 4:14; 2 Tim 1:6; 2:2).

Among the conclusions arising out of this for the practice of ordination are the following:

1. In electing and subsequently ordaining persons for tasks and ministries in churches or local/union conferences, decisions are made on the basis of spiritual and professional criteria. The gender of the elected persons does not matter if it does not hinder the communication of the gospel.

2. Ordination applies to a particular ministry, not to a special—or even inalienable—status that elevates the person above his fellow believers. In this sense, the Theology of Ordination Study Committee (TOSC) of the General Conference declared in 2014: „Ordination does not introduce a kingly hierarchy.“

3. Ordination is performed by representatives of the church or local/union conference committees that took the decision about the commission and for whom the ministry is executed. In doing so, it is not decisive whether they themselves are ordained or not.

4. Inasmuch as ordination is linked to an assignment given by a committee in charge, it applies only to the purview of said committee. Ordination as pastor in a region does not automatically include the authority to exercise one’s ministry outside of this territory. If someone is called to serve in a wider sphere of responsibility (for example, a pastor being elected as conference president), another commission and ordination is carried out.