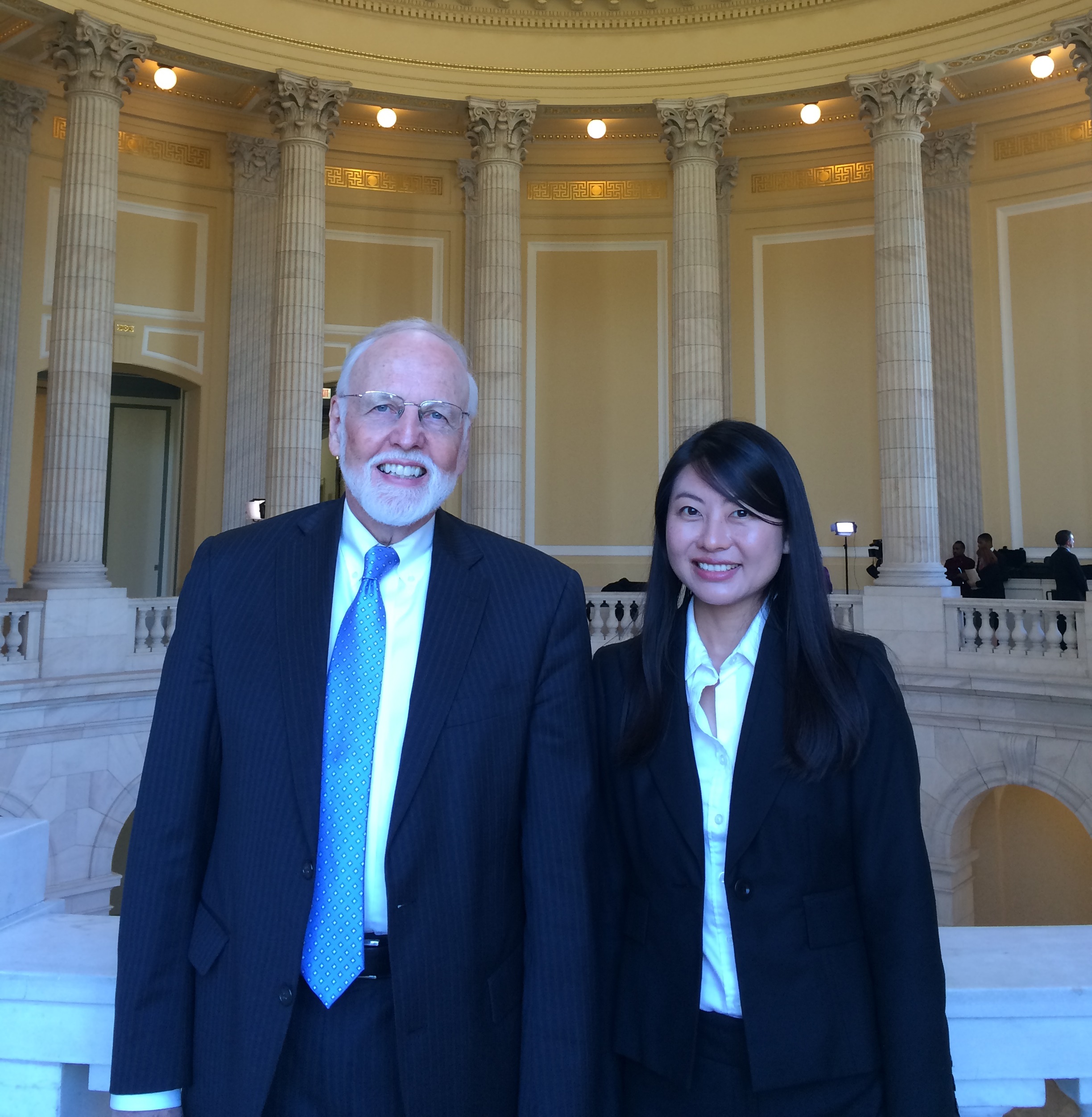 Adventist healthcare providers around the country have joined forces to talk to Washington's lawmakers about transforming healthcare and a focus on prevention. Dr. Gerald Winslow, director of the Institute for Health Policy and Leadership at Loma Linda University Health, was one of the representatives of the Adventist Health Policy Association who traveled to Capitol Hill to present a plan called Five Steps to Health in America to members of Congress. He talked to Spectrum about the plan and the assoication behind it.

Question: The Adventist Health Policy Association, representing five major Adventist health systems in the US, presented its ideas for healthcare policy and reform to members of Congress recently. In a nutshell, what do you believe needs to change in healthcare in America, and how should the focus be adjusted?

Answer: We might be able to put this in a “nutshell” if the nut is very large.  The big message is that we need to redirect some of the immense sums of money and time we invest in healthcare to the work of disease, accident, and violence prevention and the work of health promotion.

Our nation is more ready for this move than at any time in my memory.  The reason is that more policy makers understand that we must find more cost-effective ways to secure health for our nation’s citizens.  Of course, thoughtful people have made this case for decades.  But the financial incentives simply didn’t foster investments in health promotion.  There was little or no monetary reward for efforts to prevent encounters with illness care.

Now this is beginning to change.  And the five Adventist health systems are prepared to help lead the way.

Your 72-page booklet, titled Five Steps to Health in America, listed 75 recommendations to "improve the physical, emotional and spiritual health of the communities we serve." That's a lot of recommendations. How did the Adventist Health Policy Association decide on these specific ideas?

Each of the five hospitals and healthcare systems convened focus groups of knowledgeable professionals who work at the intersection of healthcare and public policy.  From the work of these groups, we developed the framework of the “five steps” within which we organized the 75 proposals.

Your group met 40 congressional officers on October 21 to present the document. Was that a good turnout? Did it meet your expectations? What do you think the members of congress will do with the booklet and its suggestions? What impact do you expect it to have? Are the Adventist health systems you represent a big enough chunk of American healthcare to catch the attention of the national government?

Let me answer the last of those questions first: Yes the five systems do represent a potentially powerful force for good in the arena of health policy.  One of the systems (Adventist Health System) is the largest Protestant faith-inspired healthcare organization in the nation, and it includes one of the largest private hospitals in the country.  Taken together, the five systems represent over 80 hospitals, hundreds of clinics, and well over 100,000 employees.  Often our healthcare institutions are among the largest private employers in their region.  So, yes, this magnitude of healthcare services does get the attention of the nation’s policy makers.  But there is a much more important reason than the size of the Adventist systems.  We are known for our commitments to health promotion, disease prevention, and community health development.  We have well over a century of experience in this work.  And there is evidence that we are trusted to do the work well.

And yes, we were pleased with the participation of all five of the Adventist systems, all of which sent representatives to Washington, DC for “Advocacy Day.”  We were able to visit with over 40 offices and more than two dozen members of Congress or their staffs.  As might be expected, we concentrated our efforts on those members of Congress who have Adventist facilities in their districts or states. This is the second year we have made the trek to Capitol Hill, and I believe we are learning to be more effective in this work.  The number of participants on our teams increased this year, including CEOs who joined in the work.

One of the main purposes of the Five Steps to Health in America was to present non-partisan initiatives that we believe are both aspirational and potentially transformational.  We were met with considerable gratitude for the work.  One congressman from Missouri, for example, voiced his appreciation because he said he felt he and his colleagues needed some fresh ideas in the often highly charged environment of our current political scene.  Others expressed both surprise and thanks for the fact that instead of asking for some special favors, we were offering our services.

Beyond whatever effects the booklet may have in the various offices of Congress and with the presidential campaigns to which the work was also given, there was the energizing reality of having our five systems work together to clarify what we see to be our best opportunities for the betterment of our nation’s health.

Besides the presentation some weeks ago, how else are you getting your policy recommendations into the hands of lawmakers?

The process of sharing our perspectives on healthcare reform doesn’t begin or end in a day.  This is ongoing work that the Adventist Health Policy Association is doing constantly. Representatives from each of the five Adventist systems meet telephonically on a regular basis to ensure continuing collaboration on many different issues.  We believe that it’s imperative for our nation’s leaders to understand that we are eager to collaborate in evidence-based interventions for whole community health.  Going forward, we will be seeking other avenues for sharing this basic commitment which is an outgrowth of our Adventist faith.

Why is it important to have this dialogue with American lawmakers?

Most members of the US Congress are not experts in healthcare.  They are constantly pressured by special interest groups.  Our hope is that we can be influential in providing information and proposals that are genuinely motivated by an abiding commitment to improve health outcomes in communities all across the nation.

Do you feel that members of the Adventist Health Policy Association, including its 84 hospitals and 400 other health centers and entities, are already implementing these policies to the extent possible?

The answer would have to be a mixture of Yes and No.  We are in a period a major transition.  One executive described this as having one foot on the dock of the existing payment system and another foot on a boat that is headed into new waters.  Along with all healthcare organizations in our nation, the Adventist systems are navigating their way through this time of transition.  The advantage we have, in my view, is the foundational purpose that gave rise to Adventist health ministries — namely our faith.

What impact do you feel the upcoming US presidential election is having/will have on healthcare policy in America?

Well, the topic will certainly be front and center again.  And this will give us new opportunities to express our convictions about focusing on health and not just healthcare.

Has the Adventist Health Policy Association, since its founding five years ago, previously made similar recommendations/presentations to congress?

Since the Adventist Health Policy Association (AHPA) was founded, it has produced a steady stream of position statements and policy briefs.  Examples of these can be found on the organization’s website.  And in addition to the organizing “Advocacy Day” for two years, there have been many other communications with members of Congress and with policy makers in various departments of government at both the federal and state levels.

Does the Adventist Health Policy Association have any full-time staffers and/or a permanent presence on Capitol Hill?

Some of our systems do engage individuals or firms that help to convey our messages at both the state and federal levels of policy making.  AHPA itself does have full-time employees, but they do not spend most of their time on Capitol Hill.

Do you feel that the Adventist health message has evolved over time in its basic principles? As the tenets of wholistic health and preventative medicine gain more adherents generally, are they receiving more widespread acceptance? Or are they becoming subsumed by the way healthcare is now generally perceived, and thus less relevant as it is no longer unique?

My belief is that the Adventist health message has developed an increasingly strong basis in evidence that has been gathered over decades of diligent work.  I’m often amazed these days by the high level of interest in principles we Adventists have espoused for generations. Paradoxically, at the same time, we live in a society beset by a rising epidemic of poor health resulting from lifestyles that lead to chronic diseases.

The basic tenets of the Adventist health message are not going out of style.  They are increasingly being recognized as effective for better health and greater longevity.  But it would be impossible to contend that these principles are being adopted by the vast majority of our fellow citizens.  There is a lot of work to do!

You are the vice president for mission and culture for Loma Linda University Medical Center and director of the Institute for Health Policy and Leadership at Loma Linda. What do you most like about your job/s? What do you find the most challenging? Did you help to create the Adventist Health Policy Association?

I wish I could claim to have helped with the founding of AHPA.  But others have this distinction. I’m proud of what AHPA has accomplished and of its current goals.

The Loma Linda University Institute for Health Policy and Leadership was established in large measure to aid AHPA in its work by having an academic institute, with faculty scholars sharing their expertise.  I’m pleased to have helped with the founding of the Institute.  I have been working in different roles within what we now call Loma Linda University Health (our corporate name for our University and its health system) for over 25 years.  And this is now my 47th year as a professor in Adventist higher education.

Since I genuinely enjoy nearly all of my work, it’s impossible to single out one superlative aspect.  But I’d answer your question this way: I find greatest satisfaction in taking the best of Adventist beliefs and seeking to make them practical in our world.  My academic field is Christian ethics.  My work in health policy is simply an outgrowth of the belief that our ethical convictions are not intended only for the elevated towers of academic reflection, but should find expression in the ways they shape better lives for whole communities.  I believe this is why Jesus sent out His disciples to share the good news of the Kingdom and to heal.