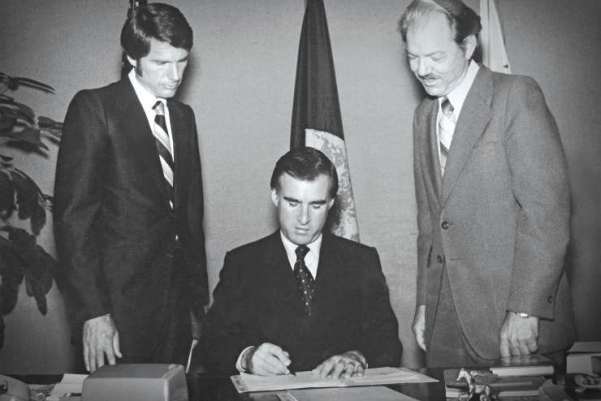 We are saddened to learn that long-time religious liberty advocate John V. Stevens passed away on November 30, 2015.

Stevens served as the president of the Arizona Conference of Seventh-day Adventists in the 1960s until joining the Pacific Union Conference as Director of the Department of Public Affairs and Religious Liberty in 1974. Under Stevens' leadership, church membership in Arizona increased nearly 70% from 3,824 to 5,569 and ten new companies and eight churches were organized.

However, Stevens' interest in religious liberty predated his conference work. According to the Pacific Union Recorder (September 30, 1974), in 1967, while he was the pastor of the Central Church in Phoenix, Stevens traveled to 15 nations, including five communist countries with other church and state relations "in the interest of fostering greater liberties for all religious persuasions." He had also served as the chaplain of the Arizona senate.

Stevens was instrumental in founding two religious liberty advocacy organizations including Council on Religious Freedom and Founders' First Freedom, which is an independent non-profit focused on religious liberty and freedom of conscience issues.

An advocate for strict church-state separation, Stevens served as a trustee of Americans United for Separation of Church and State. In 1986, Stevens joined other plaintiffs, including Americans United, who opposed the 1984 appointment of a United States ambassador to the Vatican on grounds that it violated the establishment clause and constituted a preference of one religion over another in violation of the due process clause of the fifth amendment. The case was argued before the Third Circuit by two Adventist attorneys, Lee Boothby and Walter E. Carson, and the court ultimately held that the plaintiffs lacked standing and the dispute was not justiciable because the Vatican does constitute a sovereign country.

In 2008, Stevens published a book entitled The Abortion Controversy which provided an extensively researched apologetic for legal abortion. Although the book itself was controversial, it sparked much discussion as one of the first books that addressed the controversial issue openly from the perspective of a pro-choice Seventh-day Adventist. Stevens believed that the religious right could ultimately take advantage of anti-abortion legislation to threaten personal freedoms, and argued against the personhood of an unborn fetus. Stevens was gracious with those who disagreed with his position on this issue, and because the book pulled the curtain open on a subject that had previously been shrouded in silence, it provided a catalyst for other Adventists who also believed in liberty of conscience to respond from a perspective that valued life at all stages. Even for those who vigorously disagreed with Stevens' conclusions, his book was a springboard for a much broader, necessary discussion about the nature of human life that continues to this day.

Stevens was a passionate advocate for religious liberty that fit the Adventist mold, in line with A.T. Jones, that favored strict church-state separation and broad Constitutional freedoms for members of any faith or non-faith.

In an age when religious liberty is being increasingly redefined to exclude those with whom one disagrees on matters of faith, and where some politicians' first instinct in response to fear is to advocate to shut down and limit religious freedom of entire faith groups, Stevens' legacy of advocating for unfettered freedom of faith or non-faith to the furthest extent possible is a beacon of hope. Stevens refused to negotiate these topics from a position of fear and weakness, but rather from the position that the Constitution and the faith of believers, is strong enough to withstand all threats. In short, Stevens believed in freedom in the largest sense of the word.

In 2008, as the same-sex marriage battles were heating up, on July 19, 2008, he sent me this note in response to an article we had posted about California's Proposition 8 and gave permission to post his response on this website. It is a good summary of his love for freedom and his love for God:

Thank you for sharing this item. As you know, I am personally opposed to same sex unions. But I am also opposed to a lot of other things, such as honoring the pagan day of the sun in the name of Christianity and rejecting the day God blessed and sanctified for our worship and fellowship.

But my God has given everyone the power to choose and if I am going to have His image restored in me, and that is my goal, then I will have to accept that part of Him, and honor the freedom to make choices of people with whom I disagree. I cannot in good conscience deny others the right that I wish to claim as my own. Consequently I oppose all constitutional amendments to codify religion or any aspect of it into law.

Bringing the recognition of the marriage union to the church and to private institutions with the submission of a simple form informing the government that the marriage has taken place is fine with me.  That provision would make the marriage legal in case of divorce, etc.  But the government could not under this plan require a license, hence no one needs the government's permission to get married.

These people who oppose same sex marriage and want the government to enforce their personal religious views are the identical people that want the government to conduct worship services in the public schools for their minor children, and force non believers' children to attend such services.  I find that repulsive and unacceptable and yes, even unAmerican.

We are witnessing a replay of the time when Christ was tried and sentenced to crucifixion. Remember the religious leaders' testimony?  "We have no king but Caesar."  Whenever the church resorts to the state asking them to do for them what God has not seen fit to do, they testify anew that the state is mightier and more capable than God, whom they profess to worship and serve.  So we hear in these demands by religiously conservative political forces, "We have no king but Caesar." Wonder how God must feel about that and them, for whom He paid an infinite price?

Having lobbied government on all levels for over 45 years I have yet to find anything in which the government really excels, and that I apply to all governments in the world.  They are made up of faulty people, for there are no other kinds, including ourselves, and what then can we expect? And I certainly honor the far sighted wisdom of our Founders in making this new nation a secular one, where religion is not controlled by the government and where the government is not controlled by religion, the latter being one that is taking place and expanding.

Such thinking and acting is bringing us daily closer to the fulfillment of Revelation 13:11-18. It is so sad that we are headed that direction, especially when our beginning, and during much of our history, we have reflected the lamb, Christ.

Even so come Lord Jesus. Amen.

A Memorial Service will be held January 16 at 3 p.m. at the Clearview Seventh-day Adventist Church in Surprise, Arizona.

Michael Peabody, Esq. is Editor of ReligiousLiberty.tv, where this article first appeared. It is reprinted here by permission.