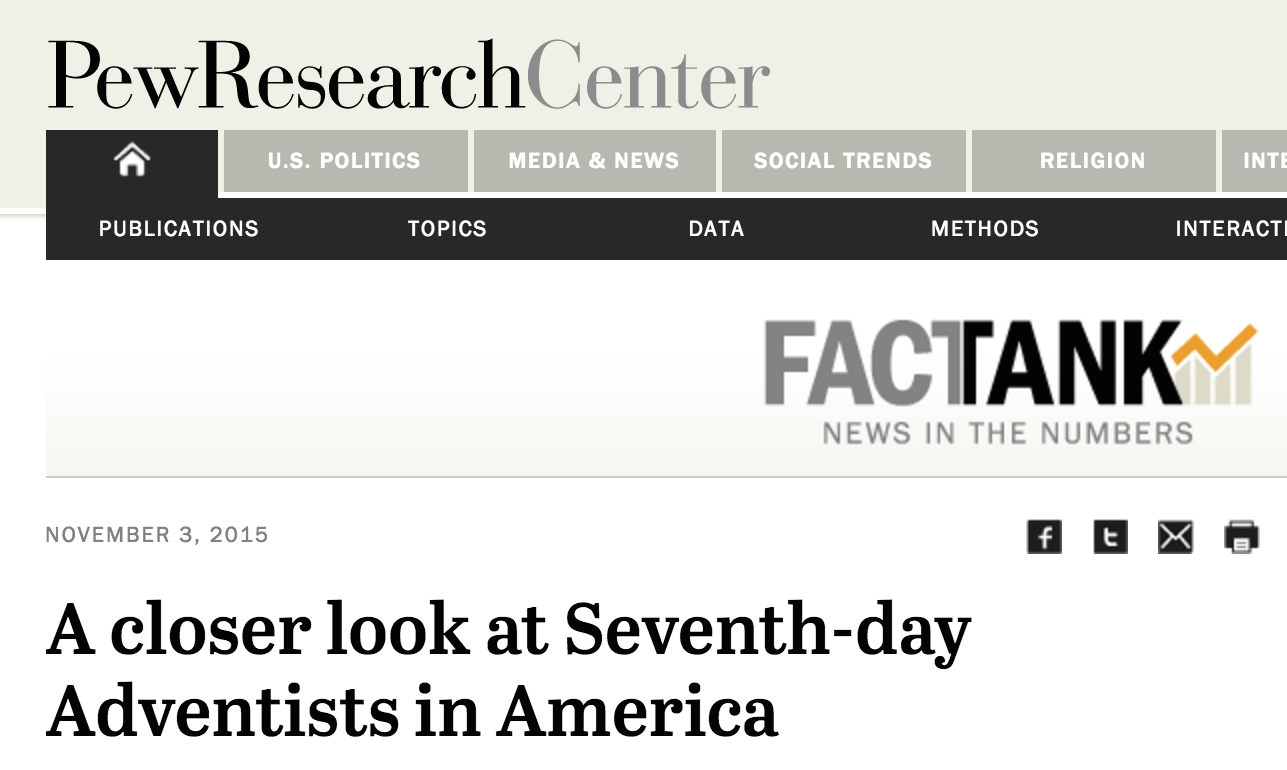 First of all, we should get the pun out of the way at the outset: Isn't it wonderful that the organization providing polling data on Religion in America is called Pew?

Three days after Pew released its data, David Trim, director of the General Conference Office of Archives, Statistics and Research, responded in the Adventist Review, pointing out areas of congruence and a few areas where Pew's numbers "raised a red flag," starting with Pew's sample size.

Trim noted that Pew surved 165 Adventists, meaning its margin of error was 9.2%, a number that would give statisticians pause. Adventists account for 0.5% of the adult population in the United States, up from 0.4% in 2007. This growth bucks the downward trend of Christianity as a percentage of adult population in America; Christianity as a "share of the population has dropped by nearly 8 percentage points (from 78.4 percent to 70.6 percent) over that same period," Pew said.

The Adventist Church conducted a survey of 1,495 members in 2013 with a margin of error of 3 percentage points. That survey allowed Trim to compare numbers from the member survey with Pew's numbers. One clear discrepancy was in Church attendance. In the Pew polling data, weekly church attendance came out at 67%, but in the church's member survey 76% attended regularly. However, Pew's sample had a much higher rate of daily prayer 86% to the church's member survey's 55%. 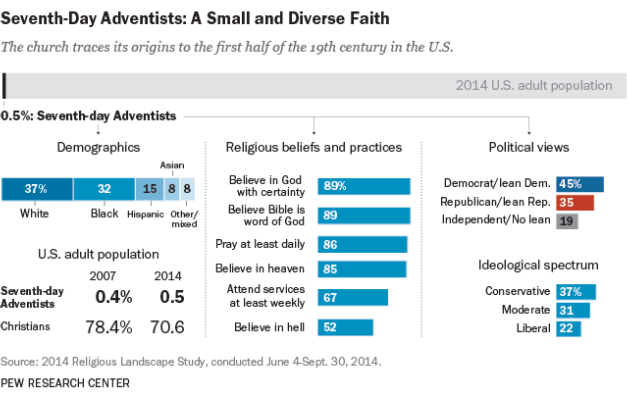 Graphic from Pew Research Insitute on Adventist faith and practice.

The graphic above, included in the Pew article on Seventh-day Adventists, shows that a significant majority of surveyed Adventists identified as Democrat or leans Democrat (45%), with only 35% identifying as Republican or leans Republican. The remaining 19% identified as Independent or no leaning. Ideologically, slightly more Adventists self-identified as conservative (37%) than moderate (31%) with only 22% identifying as liberal. The Adventist Church's survey did not ask about political affiliation or ideological leanings.

Perhaps the biggest theological oddity from the Pew's data is the statistic that 52% of respondents believe in hell. That number is significantly lower than Evangelicals, 82% of whom believe in hell. The problem is that a core tenet of Adventist teaching, the so-called "State of the Dead," is that those who die remain in the grave at rest until the resurrection of the dead at the second coming of Christ. Adventists reject the notion of a literal hell, at least on paper. So either those who responded to Pew interpreted the question differently than Pew intended it, or Adventist teachings have not taken root among members.

42% of Pew's sample believe abortion should be legal in all or most cases, and 54% believe it should be entirely or mostly illegal. 19% of surveyed Adventists shared Ben Carson’s view that abortion should be illegal in all cases. About six-in-ten Adventists (59%) surveyed said homosexuality should be discouraged by society, and 63% oppose allowing gay and lesbian couples to marry legally. Two thirds of Seventh-day Adventists (67%) reject evolution, saying that humans have always existed in their present form.