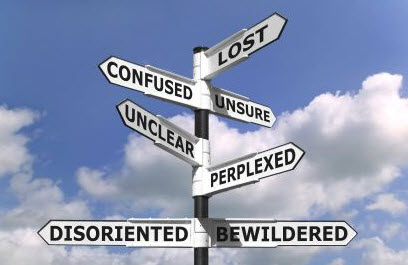 Three of the most disturbing words to have to utter. "I don't know."  We have an aversion to uncertainty and especially to admitting it to others. The advice is often given that young professionals should "fake it til you make it" and "never let them see you sweat". Essentially, even if there is uncertainty, act as if it doesn't exist.

This belief permeates several fields. I'll speak about the two I'm most familiar with: Scientific research and religion. Although many believe that these two areas are diametrically opposed to one another, they share quite a bit (only those who are unfamiliar with one or both of these fields genuinely argue otherwise) including the tendency for professionals to feign certainty where doubt exists to instill confidence.

In science research, by definition, we begin with our best guesses. Yet when results are portrayed to the public, they are often presented definitively. We want people to believe that we are competent, so we downplay the amount of doubts and imperfections with our theories. Even within research communities, we defend our theories and become personally affronted if others question them. In my behavioral neuroscience lab we would examine neurodegenerative and developmental research, looking at a wide swath of articles boasting results from a variety of experiments. These were articles published in high impact journals discussing well known cognitive ailments, the "proof" of the existence of gender beyond being a social construct, research regarding memory, etc. And yet, we easily recognized problems with outliers, sloppy methodology, and sketchy statistical leaps of logic. Of course, when these results get translated into popular articles they are written in such a way that conveys absolute certainty in the results. Many of these experiments live on in professional lore without being reproduced.

For several years I've worked on a series of experiments called the reproducibility project, examining many high impact projects and attempting to replicate the results since a disturbingly large amount  are often just taken at face value and built upon without having been reproduced by anyone.  Other professionals simply cite these results because--from the time researchers are novices-- the importance of conducting original work is stressed over and above the necessary practice of carrying out replication studies; this attitude tends to remain throughout their careers. No wonder non-reproducible results get exposed at the embarrassing rate that they do.  And unsurprisingly,  we regularly hear about  scientific "breakthroughs" being touted by popular news outlets as if they are canon but that are actually based on imperfect or even flat out untrue results. But if a popular name is attached, it gets confidently repeated.

If the scientific community was forthright with the degree to which we just don't know, wouldn't that erode the trust the public has in research? It's just better to speak without any doubt because that engenders confidence, right?

There is no shame in admitting limitations. But even if science researchers aren't as open with uncertainty as often as they should be, surely those in the faith community would be willing to do so! Sadly, our churches are taught that the opposite of faith is doubt. Agnosticism about any aspect of faith is discouraged. If the religious community was forthright with the degree to which we just don't know, wouldn't that erode the trust the public has in religion? It's just better to speak without any doubt because that engenders confidence, right? But this attitude hasn't worked well for us. Instead, doubling down has alienated religion from those who don't share our beliefs more than it has endeared us to them. Remaining entrenched in our ideas about theology, we leave little room for the possibility that maybe there are things that are different from our beliefs. Although Jesus told the disciples to leave room for the Holy Spirit's future guidance (John 16:12,13), we are determined to project absolute understanding in all aspects of God's Will.

Although God has given us prophecy for specific purposes, we often abuse and twist those purposes to be more akin to telling those who don't share our beliefs "we know more than you". We've seen this play out in Adventism in warnings that social security numbers, credit cards, and even product bar codes were all the Mark of the Beast when they were introduced. John F. Kennedy and essentially every Pope since the turn of the 20th century had been identified as the Anti Christ. Although Pope Francis will be the 4th pope to visit America and go to Washington DC, several Adventists are sure this will usher in the New World Order. Upon examining the hermeneutics and methodology, we see many flaws in logical thinking of many conspiracy theorists. Yet because they have been published via high impact channels and espoused by well known Adventists, these ideas get repeated and built upon with little scrutiny.

I'm not trying to advance the idea that we can't study and find truth. However, with disturbing frequency  we skip the application of rigorous review and just accept things as given. Those who raise doubts are often looked down upon as radical and silly. Am I talking about within science or faith? In this point they are the same. But within the realm of faith, there is extreme hubris in presupposing absolute certainty in the things of God. Have faith, yes. But being unyielding and unwilling to consider alternatives can have the opposite of the intended effect of instilling confidence. Instead, it makes us seem unreasonable at best or, if we are proven wrong on a certain point, crazy at worst.

Is there harm in saying "I don't know"? Is there shame in not having all the answers? What would happen if we were more open in voicing our uncertainties? Isn't that betraying God and being unfaithful? No. Doubt is not the enemy of faith. If we were willing to be more transparent, we would foster church members who are more authentic in their faith. They would be more willing to be honest too. They would not only be open in their questions, but also in their struggles with actions and life. It is when people feel pressure to deny all doubt that we create individuals who are either fanatically recalcitrant or who eventually reach a breaking point under the weight of pretense. This isn't healthy.

True discipleship demands doubt. Honest examinations of beliefs have to take place--corporately and individually--to have strong faith. Although it seems counterintuitive, I believe people would be more willing to trust us if we are more willing to say sometimes that we just don't know.

Courtney Ray is an ordained pastor in the Southern California Conference. She is also member of the Society for Neuroscience and does behavioral neuroscience research. She admires the fact that mathematicians insist on referring to popular ideas as theorems until a proof is established even if said idea has been commonly accepted for millennia.