Outside the Alamo 3: WO Is We

Outside the Alamo 3: WO Is We 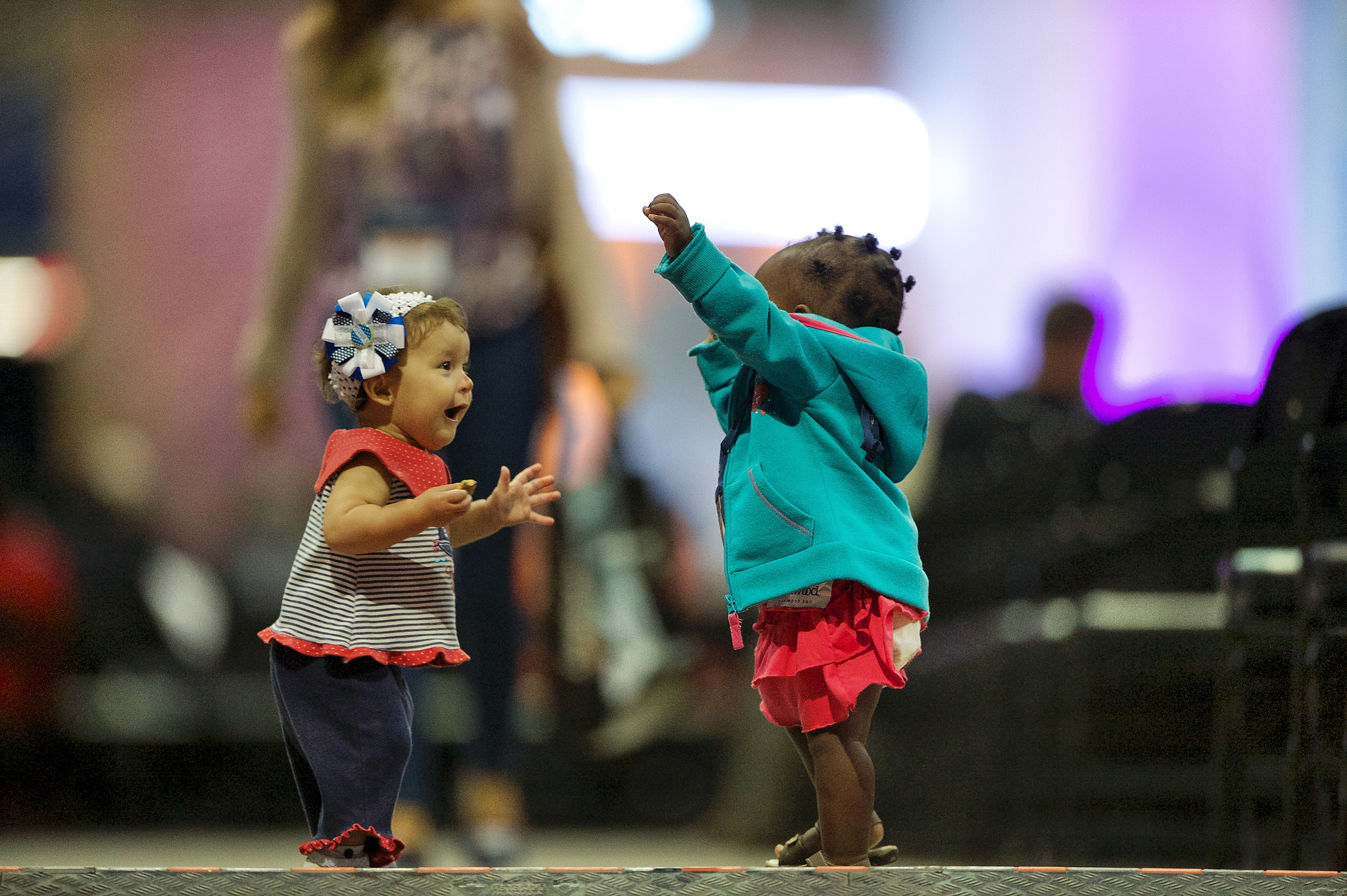 Yesterday, an elderly Asian man approached the Spectrum booth and began looking through our pamphlets and DVDs. Alisa, one of our booth staffers, asked if he had any questions.

“So, what made you decide?”

The man’s eyes glistened. “I have four granddaughters,” he said, “and I want them to know they can aspire to their highest dreams.”

From diversity to NAD to women’s ordination, the common theme of these GC Session posts has been freedom and self-determination.

The ordination debate naturally is not only about women—it’s about human beings and being human. If freedom is this sacred to God, how sacred should it be to God’s followers?

When our life breaks open, we feel the cooling hand of Beyond on our fevered brow. This is, I will say it plainly, the feminine side of God. Jesus laments, “How often would I have gathered your children together as a hen gathers her brood under her wings?” Yet the feminine is also a mother bear. Would you choose to get between the cubs and her?

After I fractured my femur in a bike accident, Dr. Reckmeyer drilled three five-inch screws into my femoral head. (No, not that head.) Eleven days later, I developed pulmonary emboli. At 1:55 a.m., Yolanda called for an ambulance as I fought desperately for breath and life.

When the four paramedics arrived, three men and one woman, the woman took over. She looked me in the eyes, asked precise questions, barked orders to three lumbering Nebraska guys, nimbly surveyed the scene, and absolutely took charge. I’ve never felt in better hands.

Though at death’s door, I remember thinking, I wish I had a video of this to show those voting on women’s ordination.

“If ‘race’ were substituted for ‘gender,’ the discussion would be over.”

“In a groundbreaking development, it has just been discovered that God is not exclusively male. Findings by theologians from all major Christian denominations affirm that God has no genitalia, X or Y chromosomes, or testosterone.

“'This is simply stunning,' one male theologian announced. ‘All this time we were working under the false assumption that God the Father is actually a male. But, of course, the best empirical way to determine maleness is by those three indicators. Wow. This changes everything.’

“Another male theologian added, ‘Jesus states in John 4:24: “God is spirit, and his worshipers must worship in the Spirit and in truth.” Aside from Jesus, God does not have a physical body—otherwise there could be no omnipresence. This really adds to our body of knowledge. Get it?’

“When reached for comment on the recent discovery, a female theologian merely shook her head and rolled her eyes.”

“The following recommendation was brought before the General Conference Session way back in 1881: ‘Resolved, That females possessing the necessary qualifications to fill that position, may, with perfect propriety, be set apart by ordination to the work of the Christian ministry’ (Review and Herald, Dec. 20, 1881).

“Apparently, this is not a new topic for us as a people. Leading up to 1881, the Advent Movement had women engaged in ministry. That practical reality is what promoted the above recommendation. It was not the result of the feminist movement trying to invade the church. Nor was the recommendation prompted by the inroads of popular secular culture. It simply arose as an acknowledgement of what was happening: Adventist women were preaching the gospel.

“Ellen White was not able to attend the 1881 General Conference Session, due in large part to the fact that her husband, James, had died in August of that year. Her son Willie, however, did attend the session. He reported the political dynamic he witnessed, describing two groups at odds with one another—one “progressive” and the other “conservative” (W.C. White to Mary White, Dec. 2, 1881, White Estate, General Conference Archives).

“After being discussed, the recommendation was not voted on, but was sent on to a small committee of three men, and that was the end of it.” (Ty Gibson, “A Closer Look at Women’s Ordination”).

In June 2014, after 106 Adventists of the Theology of Ordination Study Committee (TOSC) studied 65 papers and presentations for 18 months, two-thirds of the Committee voted to recommend that each division be allowed to determine its own trajectory on this matter.

And then—SURPRISE!—the recommendation was sucked into a vortex like a Kansas tornado, complete with orbiting soy-based cows, and dropped into a morass of tedious addenda and counterclaims. In other words, that was the end of it.

The more things change, the more they stay the same.

God is practical. Imagine the rumors if Jesus had allowed women to travel with the inner circle of twelve.

“You know, they sleep together.”

“Tsk, tsk. Such a godless mockery of decency.”

Jesus would have spent all His time fighting toxic perceptions. Already He was accused of hanging with unsavory characters and eating and drinking too much (Luke 7:34).

But then, the Master of creativity went to work. He allowed women to move along with Him and to finance Him (Luke 8:2-3), and He directed women to be the first evangelists of His Resurrection, urging, “Do not be afraid. Go.” (Matt. 28:10).

So we will not be afraid. Even if we are men.

From Ty Gibson’s “A Closer Look at Women’s Ordination”:

“When asked to provide the most direct and explicit biblical statement against women’s ordination, advocates of the position point to Paul’s statement in 1 Timothy 3:2: ‘A bishop (episkope) then must be blameless, the husband of one wife . . .’ Paul’s point here, we are told, is that the bishop (what we now generally call the pastor) must be male, because the pastor must be a husband. But there are at least two sound hermeneutical reasons we know with certainty that this is not Paul’s point.

“First, in this same passage, a few verses later, Paul says, ‘Let deacons (diakonos) be the husbands of one wife’ (1 Timothy 3:12), and then he turns around without a blink and says to the believers in Rome, ‘I commend to you Phoebe our sister, who is a servant (diakonos) of the church’ (Romans 16:1). . . .

“But there is a second reason we cannot use 1 Timothy 3 as evidence for male-only ordination. Even if we were to concede that Paul’s point is that all pastors and deacons must be males, Paul also says in the same letter that men are to lift up their hands when they pray (2:8), that women are to ‘learn in silence’ and not ‘teach’ (2:11-12), that elders who lead well, especially in word and doctrine, are to be paid double wages (5:17), and that slaves who are under the yoke of bondage are to submit to their masters (6:1).

“We consider none of these things to be timeless moral mandates. We are not having seminars and symposiums and writing essays urging upon the church the necessity of men raising their hands when they pray, of women learning in silence and not teaching, of especially effective preachers being paid double, or of slaves honoring their masters. If we just stop and think without bias, we know that Paul is speaking here within his particular historical context.”

Women, on the other hand, talk about connections—how things interrelate. Relationships with parents, siblings, spouses, God, friends and enemies, teachers, and children often form the basis for conversations in the women’s dorm.

So I’ll ask my students, “Which do you think might tend to make the better pastor?” Then I watch their eyes grow wide with recognition.

Over Sabbath lunch this past weekend, Fritz Guy told me the story of his teaching a seminary course and asking students to list the traits of a “good pastor.” After he had written five responses on the board, a startled voice cried out from the back of the room, “Hey, these are all characteristics of women!”

“Our not allowing the ordination of women is holding back the latter rain of the Holy Spirit on our church.”

I keep coming back to the biblical evidence for outlawing slavery, because for every text you find against slavery, I’ll supply three specific texts that demonstrate slaves ought to stick with the status quo and simply obey the "headship" of their masters—e.g. "Servants, be submissive to your masters with all respect, not only to the kind and gentle but also to the overbearing" (1 Peter 2:18).

Adventists rightfully claim Jesus came not to change the Sabbath but to show a better way to honor Sabbath. The same argument may be made for slavery. Slavery is all through the Original Testament. It's our Judeo-Christian heritage. Jesus never spoke out against slavery. Thus the rallying cry for centuries for many Christians who supported slavery was, "To the Bible alone!" And yet who of us today would support the institution of slavery?

Jesus faced that same literalistic mindset when He noted, "You search the scriptures, because you think that in them you have eternal life; and it is they that bear witness to me; yet you refuse to come to me that you may have life" (John 5:39, 40). It's apparent Jesus believed people ought to look for the truth behind those Bible texts.

Jesus battled the narrow literalism of His day, just as John and Peter and Paul would—just as we will. In essence, they battled the prevailing mindset by concluding, "By this all will know that you are my disciples, if you have love for one another" (John 13:35) and “Truly I perceive that God shows no partiality" (Acts 10:34) and “Love is the fulfilling of the law" (Rom. 13:8) and "He who does not love does not know God, for God is love" (1 John 4:8).

So I keep asking myself, If love is so ultimate, what practical effects of ordaining women destroy or diminish love?

I have yet to hear a sensible answer to that question.

What made Christians from William Wilberforce on fight against slavery despite biblical "evidence" against them? The story of God's loving character. The awareness, through God's Spirit, that this "slavery thing" is contrary to Jesus' love, to justice, to fulfillment, to respect. That same Spirit-led knowledge is an impelling factor in the present debate involving women.

Most of us who support women's ordination are definitely not against Scripture. We are for Scripture; we base our lives on Scripture. We're simply against a wooden, truncated interpretation of Scripture, one that doesn't take into account love or historical/patriarchal context or beating hearts (see: woman caught in adultery). As with the issue of slavery, we prefer to use all of Scripture, to step back with our hermeneutics and see the entire narrative arc. We find the best model for our lives in the person and story of Jesus, the great liberator, and how He treated all people. Jesus is not wringing His hands and biting His nails over whether women should be able to fulfill their dreams.

Listen: "I have yet many things to say to you, but you cannot bear them now. When the Spirit of truth comes, he will guide you into all truth" (John 16:12). Jesus was saying, "At present, you're way too bound up in your cultural background, worldview, and memes. However, there WILL come a time when my disciples will transcend narrow interpretations and cultural proclivities. Then they will be guided into a more gracious, truer expression of my love."

That time is now.

Chris Blake is an associate professor of English and communication at Union College and the author of many books and hundreds of articles. He is a member of the Spectrum General Conference reporting team in San Antonio, Texas.